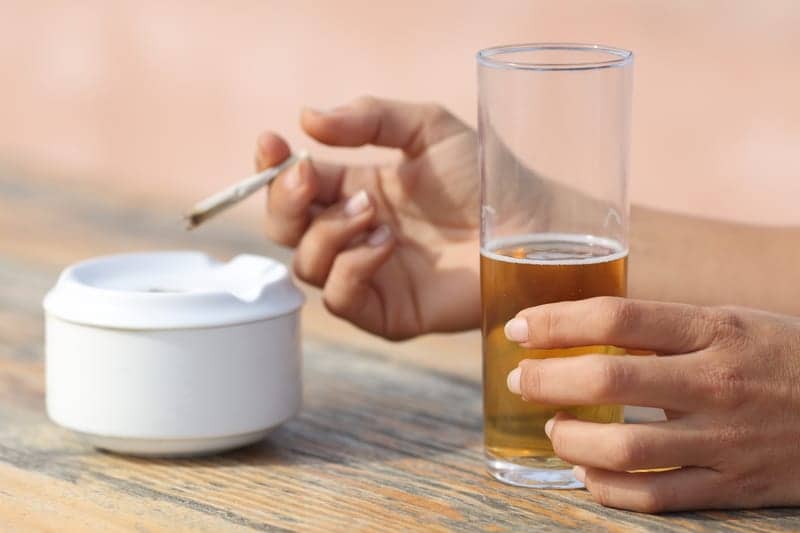 Alcohol and nicotine use have long been known to go hand in hand. Previous research shows that more than 85% of US adults who are alcohol-dependent also are nicotine-dependent. Now, researchers from the University of Missouri (MU) School of Medicine have found that nicotine cancels out the sleep-inducing effects of alcohol. The finding, published in the Journal of Neurochemistry, sheds light on the reason alcohol and nicotine usage are so closely linked.

“We know that many people who drink alcohol also use nicotine, but we don’t know why exactly that is,” says Mahesh Thakkar, PhD, associate professor and director of research in the MU School of Medicine’s Department of Neurology and lead author of the study, in a release. “We have found that nicotine weakens the sleep-inducing effects of alcohol by stimulating a response in an area of the brain known as the basal forebrain. By identifying the reactions that take place when people smoke and drink, we may be able to use this knowledge to help curb alcohol and nicotine addiction.”

Thakkar has been studying the sleep-inducing effects of alcohol and nicotine for more than five years. His previous research has shown that when used in conjunction, nicotine and alcohol increase pleasurable side effects by activating an area of the brain known as the reward center, which can lead to increased alcohol consumption. During the most recent study, rats were fitted with sleep-recording electrodes and given alcohol and nicotine. The researchers found that nicotine acts via the basal forebrain to suppress the sleep-inducing effects of alcohol.

“One of the adverse effects of drinking alcohol is sleepiness,” Thakkar says. “However, when used in conjunction with alcohol, nicotine acts as a stimulant to ward off sleep. If an individual smokes, then he or she is much more likely to consume more alcohol, and vice-versa. They feed off one another.”

Smoking is a major contributing factor to the development of alcoholism. According to the World Health Organization, more than 7 million deaths each year are attributed to alcohol and nicotine use. This research has implications to improve health, not only for heavy drinkers and smokers, but also for individuals with mental health conditions such as schizophrenia, which often is associated with smoking.

How Important Is Maintaining Circadian Rhythm For Mental Health?