Periodically Catching Up on Sleep Can Improve Gait Control 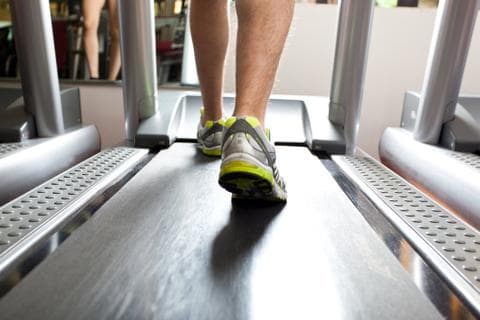 A new study finds that if you can make up for lost sleep, even for just a few weekend hours, the extra zzz’s could help reduce fatigue-induced clumsiness, at least in how you walk.

There’s plenty of evidence to show sleep, and how much we get of it, can affect how well we do on cognitive tasks such as solving a math problem, holding a conversation, or even reading this article. Less explored is the question of whether sleep influences the way we walk or carry out other activities that are assumed to be less mentally taxing.

The new study, by researchers at MIT and the University of São Paulo in Brazil, reports that walking—and specifically, how well we can control our stride, or gait—can indeed be affected by lack of sleep.

In experiments with student volunteers, the team found that overall, the less sleep students got, the less control they had when walking during a treadmill test. For students who pulled an all-nighter before the test, this gait control plummeted even further.

Interestingly, for those who didn’t stay up all night before the test, but who generally had less-than-ideal sleep during the week, those who slept in on weekends performed better than those who didn’t.

“Scientifically, it wasn’t clear that almost automatic activities like walking would be influenced by lack of sleep,” says Hermano Krebs, PhD, principal research scientist in MIT’s Department of Mechanical Engineering, in a release. “We also find that compensating for sleep could be an important strategy. For instance, for those who are chronically sleep-deprived, like shift workers, clinicians, and some military personnel, if they build in regular sleep compensation, they might have better control over their gait.”

Krebs and his co-authors, including lead author Arturo Forner-Cordero, PhD, of the University of São Paulo, have published the study in the journal Scientific Reports.

The act of walking was once seen as an entirely automatic process, involving very little conscious, cognitive control. Animal experiments with a treadmill suggested that walking appeared to be an automatic process, governed mainly by reflexive, spinal activity, rather than more cognitive processes involving the brain.

“This is the case with quadrupeds, but the idea was more controversial in humans,” Krebs says.

Indeed, since those experiments, scientists including Krebs have showed that the act of walking is slightly more involved than once thought. Over the last decade, Krebs has extensively studied gait control and the mechanics of walking, in order to develop strategies and assistive robotics for patients who have suffered strokes and other motion-limiting conditions.

In previous experiments, he has shown, for instance, that healthy subjects can adjust their gait to match subtle changes in visual stimuli, without realizing they are doing so. These results suggested that walking involves some subtle, conscious influence, in addition to more automatic processes.

In 2013, he struck up a collaboration with Forner-Cordero through a grant from the MIT-Brazil MISTI program, and the team began to explore whether more subtle stimuli, such as auditory cues, might influence walking. In these initial experiments, volunteers were asked to walk on a treadmill as researchers played and slowly shifted the frequency of a metronome. The volunteers, without realizing it, matched their steps to the subtly changing beat.

“That suggested the concept of gait being only an automatic process is not a complete story,” Krebs says. “There’s a lot of influence coming from the brain.”

Forner-Cordero and Krebs continued to investigate the mechanics of walking and general motor control, mostly enlisting student volunteers in their experiments. Cordero in particular noticed that, toward the end of the semester, when students faced multiple exams and project deadlines, they were more sleep-deprived and happened to do worse in the team’s experiments.

“So, we decided to embrace the situation,” Forner-Cordero says.

In their new study, the team enlisted students from the University of São Paulo to take part in an experiment focused on the effects of sleep deprivation on gait control.

The students were each given a watch to track their activity over 14 days. This information gave researchers an idea of when and how long students were sleeping and active each day. The students were given no instruction on how much to sleep, so that the researchers could record their natural sleep patterns. On average, each student slept about six hours per day, although some students compensated, catching up on sleep over the two weekends during the 14-day period.

On the evening before the 14th day, one group of students stayed awake all night in the team’s sleep lab. This group was designated the sleep acute deprivation group, or SAD. On the morning of the 14th day, all students went to the lab to perform a walking test.

“They had to synchronize their heel strike to the beat, and we found the errors were larger in people with acute sleep deprivation,” Forner-Cordero says. “They were off the rhythm, they missed beeps, and were performing in general, worse.”

This in itself may not be entirely surprising. But in comparing students who did not pull an all-nighter prior to the test, the researchers found an unexpected difference: The students who did slightly better were those who compensated and got slightly more sleep on the weekends, even when they performed the test at the tail end of the week.

“That’s paradoxical,” Forner-Cordero says. “Even at the peak of when most people would be tired, this compensating group did better, which we didn’t expect.”

“The results show that gait is not an automatic process, and that it can be affected by sleep deprivation,” Krebs says. “They also suggest strategies for mitigating effects of sleep deprivation. Ideally, everyone should sleep eight hours a night. But if we can’t, then we should compensate as much and as regularly as possible.”

This research was supported, in part, by the Office of Naval Research Global.