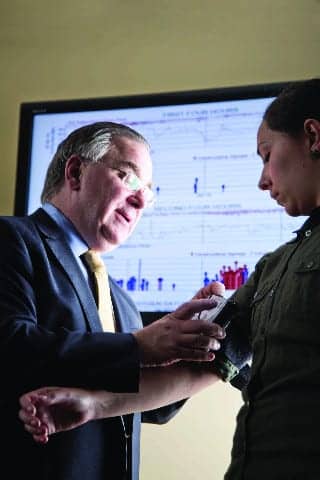 Michael Coppola, MD, FCCP, believes the sleep medicine profession is on the brink of a new standard for diagnosing sleep apnea. He sees home sleep testing moving from being merely accepted to being customary. As one of the early pioneers and supporters of home sleep testing, he now aims to make his mark in sleep medicine as the person who shepherded the large-scale implementation of the testing modality.

“We are positioned to do home testing in a very large scale across the country,” Coppola says. “I want to help steer that process to make sure it’s done right, so the day I retire, I can say, ‘I started home sleep testing, and I saw its growth to the point where it is not only accepted but the standard of care.’ And then I can retire knowing that we’ve helped millions of patients.”
Reaching that objective won’t be easy, but if Coppola’s past achievements are any indication, he will reach his goal to increase sleep apnea diagnosis through home sleep testing.

Dr Coppola went into practice shortly after completing his pulmonary fellowship at Georgetown University Hospital, Washington, DC. In 1985, during the early days of his career in Springfield, Mass, he began seeing high volumes of patients with sleep apnea who didn’t have sufficient access to care. “I was sending patients to Boston, which was a big burden on them,” says Coppola.
There had to be a better way, he thought. At that point, Coppola became determined to increase access to diagnostic testing for sleep apnea patients.

A Meeting of Minds
Realizing that goal started when Coppola connected with Michael Lawee, BS, RRT, in 1988 at a Massachusetts Thoracic Society meeting. At the meeting, Lawee was presenting some early data on home sleep testing that he was conducting as founder and president of Winmar Diagnostics. Intrigued by the data, Coppola asked Lawee to come to Springfield to start a home sleep testing program. At that time, there was not a solid, established sleep lab in Springfield so it was fertile ground to do portable monitoring.

However, the duo faced challenges with their home sleep testing model early on. “When we submitted claims, they were all denied,” Lawee said. Not to be discouraged, Coppola and Lawee began to gather data and presented it as an abstract at an American Thoracic Society meeting. As more research was published, contracts with local HMOs started to trickle in.

“In the early days, Mike would send a referral. I would conduct studies on three patients at a time in Springfield and sleep over there in a hotel because it was a two and half hour commute,” said Lawee. “The next day, I would pick up the devices, come back to Boston, download the four channels, and score them by hand. It was just me and him essentially.”

While doing testing, Coppola and Lawee continued to gather data. Then, in 1993, Chest accepted what many call a landmark article1 where Coppola and Lawee diagnosed and treated 11 sleep apnea patients from their homes. The researchers selected subjects with obstructive sleep apnea determined by unattended sleep apnea recording. The patients began nasal CPAP that was adjusted after a telephone interview with the patient and their significant other. The authors then repeated the overnight sleep apnea recording while the patients were on nasal CPAP at home to determine their response to therapy. The results showed that all 11 patients had documented return of their apnea/hypopnea index to normal.

The study shook a lot of trees, Coppola says. “Some people thought it was malpractice and other thought it was revolutionary. It depends which side of the fence you were on.” As for Coppola, he sees the study as opening the door to the beginning of a conversation. However, he says, “I had no idea at the time that the conversation was going to be 20 years long.”

Despite the difference of opinion that was starting to form over home testing, Coppola and Lawee continued to move forward with plans to diagnose sleep apnea patients. After the 1993 Chest article, they were able to get contracts with many Massachusetts HMOs and some national contracts.

Applying what research showed in the Chest study, Coppola developed a program called Community Based Sleep Apnea Management with a local hospital. The program employed home testing, had an in-lab component, and featured a patient outreach aspect. With the support of the hospital administration, the very first patient outreach session was overcapacity for a room that sat 300 people. “The fire marshal made us limit it to 300 people,” Coppola said. “We actually did a second session the following week because of patient demand.”

Seeing the needs of patients and hearing the stories of sleep apnea patients at these sessions had a strong impact on Coppola. “He was one of the early supporters of strong CPAP management,” said Lawee. “He was the first doctor I know who said you should shift the onus to CPAP management from testing. He felt that if you don’t have good outcomes on CPAP, there is no point in doing diagnostic testing; it’s a waste of money.”

The success of the home sleep testing model was short-lived, however. In 1994, the Standards of Practice Committee of the American Sleep Disorders Association published Practice Parameters for the Use of Portable Recording in the Assessment of Obstructive Sleep Apnea. The standards stated: “Unattended portable recording for the assessment of OSA is an acceptable alternative only in the following situations:
1. For patients with severe clinical symptoms that are indicative of a diagnosis of OSA and when initiation of treatment is urgent and standard polysomnography is not readily available.
2. For patients unable to be studied in the sleep laboratory.
3. For follow-up studies when a diagnosis has been established by standard polysomnography and therapy has been initiated.”

Shortly after the publication of the practice parameters, Coppola and Lawee lost contracts. “The AASM never really said you can’t do home testing; they said that the parameters are such that limited studies are only good if the patient can’t make it to the lab or if a patient lives in a rural area, etc. Basically, they made it very difficult,” said Lawee. “During that time, we hunkered down and did lab studies. Once we stopped doing home testing, our pool of patients dropped. In those days, we kept putting out data instead of fighting everybody. Those were great times but very anxiety provoking.”

A New Era
In late 2007, Coppola’s determination to use home testing to diagnose sleep apnea was reignited. At that time, the Centers for Medicare and Medicaid Services (CMS) proposed “to expand coverage of CPAP to include those beneficiaries with a diagnosis of OSA made using a combination of a clinical evaluation and unattended home sleep monitoring using a Type II, III or IV device.”

Dr Coppola was one of only a handful of industry professionals who had the opportunity to speak to the Medicare Evidence Development and Coverage Advisory Committee (MedCAC) on changing CPAP coverage criteria for sleep apnea home testing. Those who spoke at the meeting in support of home testing played an undeniable role in the outcome of CMS’ ultimate choice to change its coverage decision. But it was sound data that spoke most loudly. In fact, “A lot of the data used came from the early studies that Mike and I did,” says Lawee.

Since CMS changed its coverage decision, more sleep centers have been adopting the technology. A recent survey found 51% of labs now offer home testing for privately insured patients. But Coppola has a bigger vision—a larger scale implementation of home testing that he hopes to achieve in his current role as chief medical officer and vice president of medical affairs at NovaSom, a privately held diagnostic-service provider for home testing. The company makes the service available through community-based physicians and through its sleep center partners. NovaSom has a far reach, partnering with major national and regional health insurers, covering more than 165 million American lives as of January 1, 2012.

“What is fascinating about this particular entity is that they are geared up to do home testing in a high-quality, highly efficient manner,” says Coppola. “The technology, infrastructure, quality control, and management team in place here can produce the results that I dreamed about.”

However, Coppola is quick to point out that the end game is not saying, “My schedule is full and my business is successful.” The point is, he says, “to do everything we can to reach the most patients we can in an effective manner.”

Coppola is striving to reach patients and establish partnerships not only though NovaSom, but also through his work as president and chief medical officer of the American Sleep Apnea Association (ASAA), a nonprofit organization that promotes awareness of sleep apnea, works for continuing improvements in treatments for the disease, and advocates for the interests of sleep apnea patients.

“It’s the nature of our organization to make sure physicians and patients are connected, and Dr Coppola is an excellent example of that kind of connection,” says Ed Grandi, executive director of the ASAA. “When he was invited to join the board, he was really excited about being able to help support the organization that’s dedicated to helping patients.”

This help comes in the form of making sure patients can carry CPAP on an airplane, for example, and creating workplace environments where patients with sleep apnea are protected from being wrongfully terminated from a job because of their condition.

Dr Coppola’s leadership extends beyond his capacity at the ASAA and NovaSom. He also recently served as vice chair of the work group on the future of sleep medicine and the medical home. The group was tasked with exploring new technologies and opportunities for the field of sleep medicine based on data and upcoming changes in health care. A report2 from the group concluded, “Emerging changes in the healthcare system will undoubtedly have a large, but unfortunately unknown, impact on our field. One model that has emerged is the patient-centered medical home (PCMH). As a specialty, the best place for sleep medicine in the PCMH framework is as a good neighbor. Being a good neighbor requires enhancements in multiple forms of communications and demonstrating value with measurable long-term outcomes.”

It’s data from these outcome measures that Coppola plans to use to secure a winning future for sleep apnea patients, whether that is in his role at NovaSom, the ASAA, or planning for the future of sleep medicine because, after all, according to Coppola, “The data always wins.”

Franklin A. Holman is editor of Sleep Review. Questions can be submitted to sleepeditor@allied36.com.