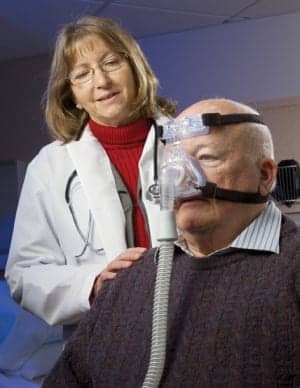 Veteran researcher Susan Redline, MD, MPH, seeks to better understand the relationship of sleep with aging and age-related outcomes. Here, she secures a CPAP mask on a patient.

Studying slumber is no easy task. Gathering sleep data requires overnight monitoring, and this extra time inevitably gobbles up more funds. Meanwhile, researchers in other fields may require only a quick blood pressure test or 15 minutes of respiratory monitoring.

It may add up to more work, but veteran researcher Susan Redline, MD, MPH, is convinced the extra time and money are worth it. Over the last two decades, colleagues in a variety of disciplines have heard her message, and federal funding organizations have backed up that interest with crucial grants.

From her post as Peter C. Farrell Professor of Sleep Medicine, Harvard Medical School, Redline is determined to continue the momentum of sleep research within the next generation of medical students. “There are still academic institutions that barely touch sleep medicine,” laments Redline. “Harvard was one of the first universities to actually have a division of sleep medicine that was independent of other divisions within departments of medicine.”

Harvard’s dedication mirrors Redline’s own devotion to sleep research, an interest she has nurtured for more than 20 years while working at other universities, including Cleveland’s Case Western Reserve. Toiling in the sleep trenches long before it became fashionable, Redline used her training as a pulmonologist to home in on the relationship between sleep and many other health problems.

As director of the Polysomnogram Reading Center during the massive Sleep Heart Health Study (the SHHS began in 1994), Redline ensured quality and consistency of polysomnographic interpretations across more than a decade of observations. “For research over a span of years, that reading or measurement must be accurate the first time, the second time, and every time,” says Michael Twery, PhD, director, National Center on Sleep Disorders Research, Division of Lung Diseases, National Heart, Lung, and Blood Institute (NHLBI). “Dr Redline has been a pioneer in how that can be accomplished.”

Additional studies from Redline have explored the relationship between sleep-disordered breathing (SDB) and metabolic risks, along with inquiries into genetic risk factors associated with SDB in African American children. “We are becoming more aware that sleep disorders preferentially affect certain minority populations, and populations with socioeconomic disadvantages,” says Redline. “It is important to better understand the role of sleep disorders—and potential treatment and prevention of sleep disorders—in underserved, high-risk ethnic minorities, and address health disparities in these populations.”

Along those lines, Redline is currently involved in the Hispanic Community Health Study, the largest effort of its kind to collect sleep apnea measurements on 16,000 Hispanic Americans from four different communities in the United States. “At the end, we will also be able to look at the relationship between sleep apnea in Hispanics and how it relates to risk for cardiovascular disease,” says Twery. “In another study funded under the Recovery Act Grand Opportunities Program at the National Institutes of Health (NIH), Dr Redline is leading a phase 2 multisite comparative effective study called ‘HeartBeat’ to evaluate the ability of sleep apnea treatments to reduce cardiovascular disease morbidity [ “ public.nhlbi.nih.gov/newsroom/home/GetPressRelease.aspx?id=2698 “].

Ethnicity gives way to age and gender in a pair of ongoing studies conducted with Katie L. Stone, PhD, senior scientist at the San Francisco-based California Pacific Medical Center (CPMC) Research Institute. Both studies seek to better understand the relationship of sleep with aging and a variety of age-related outcomes among older men and women.

The first effort, dubbed the MrOS Sleep Study (funded by NIH/NHLBI), is an ongoing multicenter investigation of approximately 3,000 men, aged 67 and up. “The primary objective is to determine the association of sleep-disordered breathing/sleep apnea with subsequent risk of cardiovascular events such as myocardial infarction and other coronary heart disease events, stroke, and arrhythmia,” says Stone, who is acting as principal investigator. “There is evidence of an association between sleep apnea and cardiovascular events in younger adults, but it is uncertain whether older adults with sleep apnea experience similar increases in risk.”

The second inquiry is a two-site study of older women to determine if certain sleep characteristics (apnea, hypoxia, sleep duration, and fragmentation) are associated with cognitive impairment and decline, and/or onset of mild cognitive impairment/dementia. “Similar to the MrOS study, we have collected in-home polysomnography and wrist actigraphy for objective measures of sleep in the SOF Sleep and Cognition Study,” says Stone. “The project is funded by the NIH/National Institute on Aging.”

With so many studies concluding that sleep disorders affect health in a variety of ways, Stone believes now is the time for new clinical trials to test whether treatments for insomnia and other sleep disorders can improve sleep and reduce the risk of related conditions—particularly in older adults. “There is particular need,” says Stone, “for comparative effectiveness trials analyzing the effectiveness of sleep medications versus behavioral interventions for insomnia.”

The past decade has seen larger cohort studies with objective sleep measures. And according to Stone, the technology for assessing sleep is improving rapidly, making large-scale studies more feasible and less invasive. “There is a lot of exciting work to be done to more efficiently and cost-effectively diagnose patients so we use health care dollars more efficiently,” adds Redline, who also has privileges at Brigham and Women’s Hospital and Beth Israel Deaconess Medical Center. “It may involve using more home-based techniques, and refining our approaches for screening and diagnosis.”

Redline contends that the molecular and genetic base of sleep disorders is still ripe for inquiry, and she acknowledges that it will require large-scale studies “where you basically hunt for genes and proteins that may be involved in sleep disorders.” Still other cases may require animal models to determine events at a molecular level.

“One area that people are looking at is pharmacological therapy that may alter breathing patterns or airway patency,” offers Redline. “Those studies are largely still in development, but as we better understand the etiologic basis of sleep apnea, this work may incorporate considerations of the physiologic characteristics that influence upper airway muscles. We may ultimately be able to identify and target molecular pathways to improve airway patency.”

Nathan A. Berger, MD, agrees that large-scale studies focusing at the molecular level could very well represent the future of sleep research. “We really need to understand the molecular mechanisms of how sleep abnormalities affect other tissues,” says Berger, Hanna-Payne Professor of Experimental Medicine and professor of medicine, biochemistry, and oncology at Case Western Reserve University School of Medicine, Cleveland. “We also need to understand the circadian rhythms, because all sorts of hormones and growth factors change in the circulation with circadian rhythm, and we need to know how changing sleep patterns affect these rhythms, and how they affect everything else.” 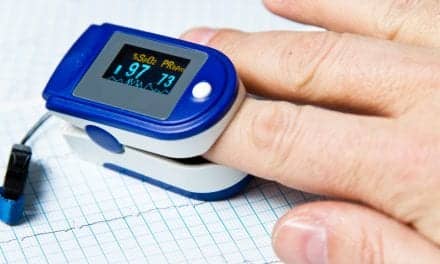 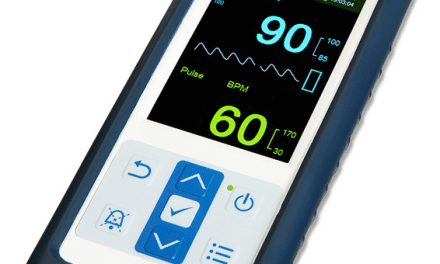