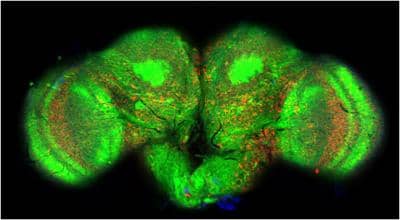 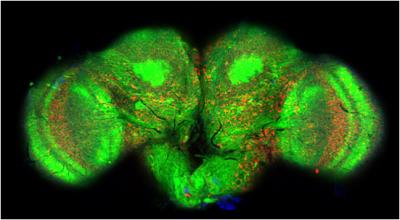 The fly brain is half a millimeter across and contains approximately 100,000 nerve cells (green). The A-beta peptide forms plaques (red) that are linked to nerve cell death and behavioral abnormalities in the flies. (credit: Dr Stanislav Ott, Department of Genetics, University of Cambridge)

Being awake at night and dozing during the day can be a distressing early symptom of Alzheimer’s disease, but how the disease disrupts our biological clocks to cause these symptoms has remained elusive.

Now, scientists from the University of Cambridge, UK, have discovered that in fruit flies with Alzheimer’s the biological clock is still ticking but has become uncoupled from the sleep-wake cycle it usually regulates. The findings–published in Disease Models & Mechanisms–could help develop more effective ways to improve sleep patterns in people with the disease.

People with Alzheimer’s often have poor biological rhythms, something that is a burden for both patients and their care givers. Periods of sleep become shorter and more fragmented, resulting in periods of wakefulness at night and snoozing during the day. They can also become restless and agitated in the late afternoon and early evening, which is known as “sundowning.”

Until now, it has been unclear how Alzheimer’s disrupts the biological clock. According to Dr Damian Crowther of Cambridge’s Department of Genetics, one of the study’s authors: “We wanted to know whether people with Alzheimer’s disease have a poor behavioral rhythm because they have a clock that’s stopped ticking or they have stopped responding to the clock.”

The team worked with fruit flies–a key species for studying Alzheimer’s. Evidence suggests that the A-beta peptide, a protein, is behind at least the initial stages of the disease in humans. This has been replicated in fruit flies by introducing the human gene that produces this peptide.

Taking a group of healthy flies and a group with this feature of Alzheimer’s, the researchers studied sleep-wake patterns in the flies, and how well their biological clocks were working.

They measured sleep-wake patterns by fitting a small infrared beam, similar to movement sensors in burglar alarms, to the glass tubes housing the flies. When the flies were awake and moving, they broke the beam and these breaks in the beam were counted and recorded.

“This lets us see the brain glowing brighter at night and less during the day, and that’s the biological clock shown as a glowing brain. It’s beautiful to be able to study first hand in the same organism the molecular working of the clock and the corresponding behaviors,” Crowther says.

They found that healthy flies were active during the day and slept at night, whereas those with Alzheimer’s sleep and wake randomly. Crucially, however, the diurnal patterns of the luciferase-tagged protein were the same in both healthy and diseased flies, showing that the biological clock still ticks in flies with Alzheimer’s.

“Until now, the prevailing view was that Alzheimer’s destroyed the biological clock,” Crowther says.

“What we have shown in flies with Alzheimer’s is that the clock is still ticking but is being ignored by other parts of the brain and body that govern behavior. If we can understand this, it could help us develop new therapies to tackle sleep disturbances in people with Alzheimer’s.” 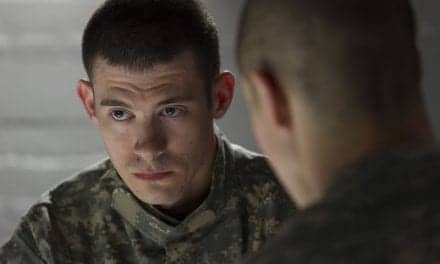 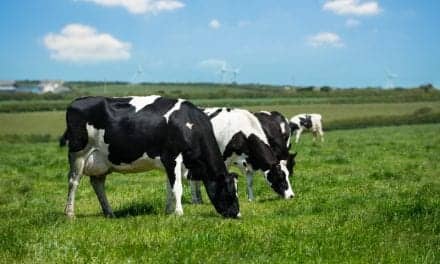