Preliminary results from a new study suggest that sleep disturbances are associated with mental health problems among survivors of a natural disaster even two years after the event.

The researchers surveyed survivors two years after the 2010 earthquake in Haiti. Results show that 94% reported experiencing subsequent insomnia symptoms after the disaster. Two years later, 42% showed clinically significant levels of post-traumatic stress disorder (PTSD), and nearly 22% had symptoms of depression. There were significant positive correlations between sleep disturbances and peritraumatic distress (ie, emotional reaction during and immediately after the event), PTSD, and symptoms of depression. Resilience did not appear to be a buffer against sleep disturbance.

“This is one of the first epidemiological studies to investigate the prevalence of sleep disturbances among survivors of the 2010 Haiti earthquake,” said lead author and principal investigator Judite Blanc, PhD, an NIH T32 postdoctoral fellow in the Center for Healthful Behavior Change within the Division of Health and Behavior in the Department of Population Health at NYU School of Medicine. “Our study underscores the strong association between common trauma-related disorders and comorbid sleep conditions among a group of survivors.”

The study involved 165 participants with a mean age of about 31 years; 52% were men. Participants were living in Port-au-Prince, Haiti, one of the areas affected by the 2010 earthquake. According to the authors, it was the most devastating earthquake in the country’s history, killing more than 200,000 people and displacing more than 1 million residents.

“Findings from our study highlight the need to assess and treat sleep issues among disaster survivors, as they are highly prevalent after a natural disaster and are related to mental health conditions,” said Blanc. “Our work supports the importance of sleep in disaster preparedness programs globally.”

Blanc added that sleep is often neglected in the aftermath of traumatic events, but in these situations, sleep should be considered an important target of mental and physical health interventions.

“Our results make the case that sleep health should be a major component of all public and global health programs and specifically in humanitarian crises,” said Blanc.

The research abstract was published recently in an online supplement of the journal SLEEP and will be presented Tuesday, June 11, in San Antonio at SLEEP 2019, the 33rd annual meeting of the Associated Professional Sleep Societies LLC (APSS), which is a joint venture of the American Academy of Sleep Medicine and the Sleep Research Society. 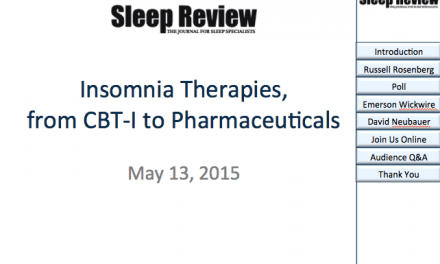 Insomnia Therapies, from CBT-I to Pharmaceuticals