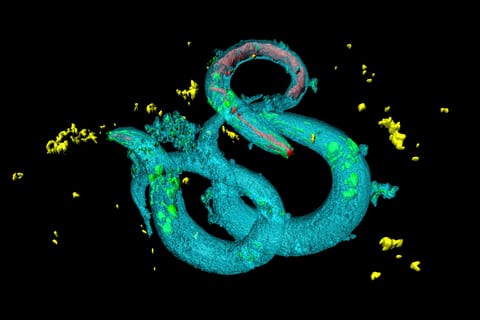 Researchers who study the model organism C. elegans, a roundworm, have discovered some interesting clues about how the brain coordinates sleep and wakefulness, reports Medical Xpress.

When monitoring the activity of the brain as it fell asleep, Nichols made an interesting discovery: her computer analyses indicated that neuronal network activity spontaneously converged to a quiet and stable state. Originally, the researchers had assumed that RIS cells would force the nervous system into quiescence much like a conductor who silences the orchestra after the final chord. However, the new data suggest that RIS seems to act more like a mediator who negotiates an agreement between all players, followed by a collective action. The advantage of this scenario is that the dramatic changes between wakefulness and sleep can be triggered by rather subtly turning some of the regulatory knobs in the brain.

Read the rest at www.medicalxpress.com