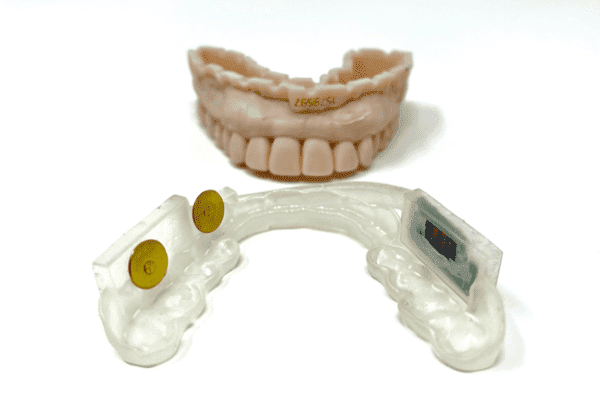 Several companies are developing smart sensors for oral appliances that will measure parameters of sleep such as AHI and even brain wave activity.

We know from in-lab polysomnography that oral appliance therapy works for treating mild to moderate obstructive sleep apnea in many patients, but tracking therapy efficacy in real-time on a nightly basis has historically been out of reach. Now, several medical device companies are betting that by embedding biosensors into oral appliances that the medical world might embrace oral appliance therapy as on par with the gold-standard therapy of CPAP.

“It is a very exciting time in the field and there are a lot of emergent technologies that we think are going to enhance the standard of care,” says Len Liptak, CEO and cofounder of ProSomnus Sleep Technologies, which has developed a patent portfolio of various sensors that could be inserted into its oral appliances.

Several sleep therapy companies are on track to get regulatory approval for oral appliance biosensors that could detect how patients respond to therapy. SomnoMed, ProSomnus Sleep Technologies, and Achaemenid Innovations are looking into how to incorporate biosensors into oral appliances, and while some of the details are still confidential, all the products work in a similar way—tiny sensors are seamlessly embedded inside the oral appliance to keep tabs on oxygen desaturation and other sleep metrics.

The Achaemenid device, for which the company recently applied for an FDA Breakthrough designation, is about to enter a clinical trial at Harvard’s Brigham and Women’s Hospital in Boston to test its accuracy against a home sleep test for the detection of sleep apnea. The company’s leadership hopes to partner with other medical device companies to reach as many patients as possible.

The Achaemenid device’s functionality is straightforward: When a patient goes to sleep, the sensor is activated by the core body temperature. Then, the SpO2 sensor kicks on to measure blood oxygen, and a red light and infrared light photoplethysmography (PPG) sensor is activated.

“It captures the physiological data from the inside of the mouth, from the soft tissue,” says the inventor Reza Radmand, DMD, FAAOM, founder of Achaemenid Innovations.

The sensor is snugly situated inside the mouth, so there is no more than a millimeter between the gum surface and the light to pick up the vascular tone.

“It is basically a miniaturized version of a finger oxygen sensor, except it is customized to go in the mouth,” says Radmand.

Additionally, Radmand says, once the patient begins to sleep, the sensor could act as an objective adherence recorder.

According to Radmand, who first filed a patent for an oral appliance biosensor in 2016, proof-of-concept studies show that the oral appliance sensor captures data at a rapid pace because it is a core arteriolar tone sensor, meaning that it is close to the heart, unlike pulse oximeters that capture peripheral data from the finger.

“Basically, we get the most accurate and fastest response during desaturations or during any type of arousals, for example, during disturbed sleep,” says Radmand, a research collaborator in the division of sleep medicine at Brigham and Women’s Hospital in Boston.

Australian medical device company SomnoMed also began working on new biosensor technology after taking a survey of several hundred sleep physicians during the pandemic to find out why the uptake of oral appliance therapy has historically been low. After the survey, the SomnoMed team determined that more technology was needed to enhance oral appliance therapy to capture proof of objective long-term efficacy and compliance.

SomnoMed then developed the Rest Assure technology. The goal, says Neil Verdal-Austin, CEO and managing director at SomnoMed, was “to take these devices and make them intelligent.”

The Rest Assure technology, designed to capture biometric data that is evaluated with an algorithm, delivers an apnea hypopnea index (AHI) score every morning. In the morning, the sensor, embedded in an oral appliance, rests in a docking station, where it charges, and delivers its sleep insights to sleep physicians and dentists.

“This is not just another oral appliance,” says Verdal-Austin.

SomnoMed plans to submit all of the documentation for FDA approval by the end of 2022. After approval, the company plans to insert the Rest Assure technology into the digitally milled SomnoDent Avant and the Herbst Advance Elite. Commercial sales could begin as soon as March of 2023.

While the capabilities of the oral appliances will grow, says Verdal-Austin, there will be no detectable change in the feel or comfort of the devices.

By obtaining data from inside the mouth, oral appliances bypass common issues dealt with during sleep studies. For instance, a finger pulse oximeter might get jostled off or move during the night. When using an oral appliance sensor, the sensor is so securely placed that movement ceases to be an issue. “In the mouth, the teeth pretty much stabilize the appliance, thus stabilizing the sensor,” says Radmand.

Similar to the SomnoMed Rest Assure, after a night of use, the Achaemenid Innovations sensor can be placed inside a case, which acts as both a charger and a download hub. All the data is then automatically uploaded onto the cloud or a smart device, where it is shared with the patient as well as the provider.

“The beauty of this is that now we know that if I am delivering an oral appliance to a patient, instead of waiting three months or two months for a sleep study and then titrating the patient, I know what happens to that patient that night, so I can titrate them the next day and can continue to observe them in perpetuity and indefinitely without any additional cost or encumbrance to the patient,” says Radmand.

In addition, the oral appliance biosensors provide a way for clinicians to increase adherence by involving the patients in their own treatment.

“This is going to be a patient-centered monitoring device, where a patient doesn’t feel left out and they can see their own progress. And I think it will just change the whole way of therapy for us,” he says.

“The other benefit is more of a global vision,” Radmand says. “We potentially will have a healthier society once we can put these tools in the hands of not only the patients, but also the healthcare providers…This is going to be the renaissance of oral appliance therapy.” 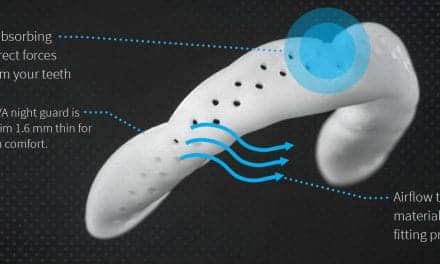 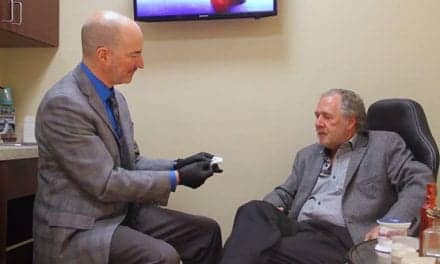