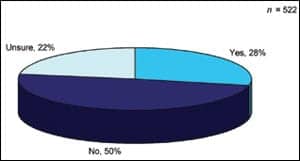 Negative economic trends in the sleep market appear to be subsiding.

Industry professionals who keep a close eye on trends in the sleep market awaited the results of the Q1 2010 Sleep Center Survey with their fingers crossed, hoping findings would show signs of growth. Well, those industry watchers can now breathe a sigh of relief … a small sigh. Respondents of the Q110 Sleep Center Survey, conducted by Sleep Review in partnership with Wells Fargo Securities, LLC, reported that disappointing economic trends are shifting to an extent.

ECONOMY SHIFTING FROM HEADWIND TO TAILWIND

Given the state of the US economy and investor concerns over the economy’s impact on the sleep apnea market and the broader health care industry, we again included several questions about the economy. About a quarter (28%) of the respondents indicated that the economy has begun to have a positive impact on patient volumes. We note that while CPAP is nearly universally covered by Medicare and insurers, patients may have to pay significant deductibles or co-payments “out-of-pocket.”

Looking out over the next 12 months (NTM), the sleep centers expect the economy to cause a 0.9% increase in their volume growth. This is a noticeable improvement from the 0.5% decrease that was expected in our Q3 2009 survey. When asked about why patient volumes were being hurt, the most common response (from 64% of sleep centers) was patient concern over out-of-pocket expenses.

On average, respondents have seen patient volume grow 4.6% in the last 12 months (LTM) and expect 9.4% growth in the NTM, and we note that the most common responses were for 0% to 4% growth in both the LTM and the NTM. These numbers are slightly different than the reported and expected bed growth rates (which were 8.7% and 14.1%, respectively).

We are not sure how to explain the discrepancy between these two questions; one possible explanation might be that there is a lag between sleep center expansion and patient volume growth. This is the sixth time we have asked this particular question, and it appears that there is a clear downward trend in LTM growth though NTM growth expectations appear to have stabilized.

We can think of two reasons that patient volumes are slowing: (1) the sleep market is maturing and penetration is increasing (the “law of large numbers”); and (2) the economic slowdown appears to have caused patients to decrease utilization of health care services. Similarly, we can think of two reasons that expectations of volume growth and sleep lab expansion plans are improving: (1) increased optimism about the economy; and (2) easier access to credit for funding expansion.

SLEEP CENTER EXPANSION HAS IMPROVED TO THE HIGH SINGLE DIGITS

Overall, we think that the survey indicates that sleep centers growth has picked up. Looking into 2010, we expect the US CPAP market to grow by 10% to 12% with 6% to 7% volume growth in new patients and 4% to 5% growth from increased mask replacement rates as home medical equipment dealers strive to maximize recurring revenue opportunities to offset reimbursement declines.

Among the roughly 12,500 sleep professionals that we sent the survey to, 577 responded to one or more of the survey questions for a response rate of 5%. The responses were collected between January 12 and January 19, 2010. None of the questions in this survey were mandatory, therefore response rates varied from question to question (we note the response rate on each of the charts). We received responses from a range of sleep industry participants with sleep center directors/supervisors/managers (29% of respondents) and registered polysomnography technicians (28% of respondents) representing the most common titles. Responses also covered every geographic region and 48 of the 50 US states with the Midwest (29% of respondents) and Southeast (27% of respondents) the most heavily represented regions. 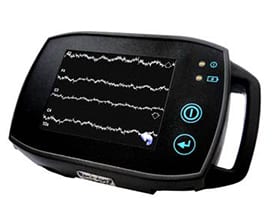 Alcohol Interferes with the Restorative Functions of Sleep