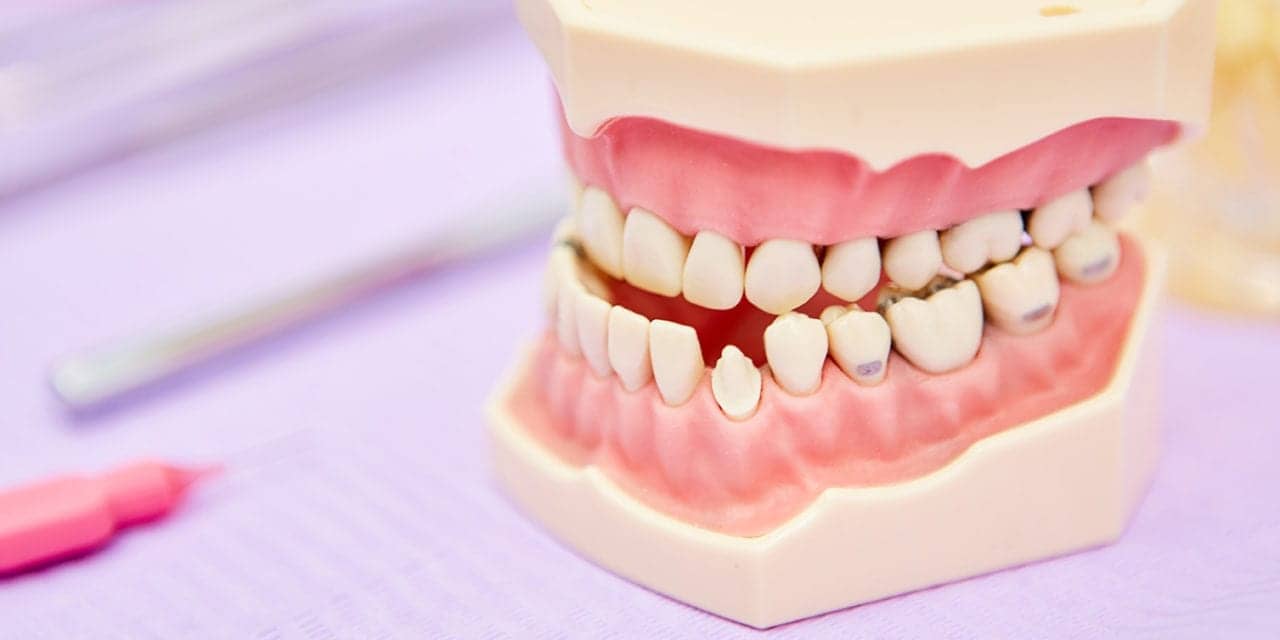 Oral appliance use can cause occlusal changes in sleep apnea patients. Dentists should track tooth and jaw movements, but conservative interventions are typically all that is needed.

For many patients, oral appliance therapy is an effective alternative to CPAP for treating obstructive sleep apnea. However, as with CPAP, clinicians and patients need to be aware of potential side effects.

Among the most common side effects are occlusal changes, including shifting of bites and interproximal spaces, which can affect a significant number of patients. For example, in a 5-year study of 45 patients, 67% experienced a decrease in occlusal contacts.1 A separate study found significant decreases in anterior and posterior overbites with long-term oral appliance use, which, particularly for normal or shallow baseline overbite patients, can cause an open bite.2

While clinically occlusal changes can be significant, they’re often a case of millimeters of change—and rarely noticed by patients.

“Patients don’t often complain about changes,” says Mark T. Murphy, DDS, DABDSM, a dentist who practices in Rochester, Mich, and who is lead faculty for clinical education for ProSomnus. “But clinicians don’t like it.”

Nancy Addy, DDS, president of the American Academy of Dental Sleep Medicine (AADSM), agrees with Murphy. She says patients are often more interested in changing from a CPAP than in the potential occlusal changes—though in her experience changes can be expected in about 75% of patients.

Watchful waiting, jaw stretching exercises, and morning occlusal guide use are the firstline measures for occlusal changes, according to AADSM consensus recommendations published in 2017.3

Unfortunately, data is scant on the topic of patient adherence with occlusal management tools. Indeed, in preparation for an interview for this article, Addy directed her staff to research patient compliance regarding morning exercises, but they were unable to find any published studies—suggesting that best practices about managing occlusal guide or exercise adherence is, as of now, anecdotal.

Oral appliances may lead to a posterior open bite, shown above (normal bite below).

To limit reliance on morning occlusal guides and jaw exercises, many oral appliance manufacturers have taken steps to design oral appliances that aim to minimize side effects.

“Our devices are designed to cover all of the coronal tooth structure including the distal of the last standing tooth,” says Chris Hart, BSc, BDSc (Hons), MPhil (Cantab), an Australian-trained dentist and CEO of oral appliance manufacturer Oventus. “The precision-printed nylon is also a firm material to minimize the risk of tooth movement. They incorporate balanced occlusal support in the advanced position to prevent torqueing of the mandible.”

ProSomnus’ Murphy notes that the company’s devices are made from milled polymethylmethacrylate (PMMA), designed to fit like a retainer, including wrapping the distal. While devices on the market that don’t wrap the distal are effective and easier to fit, Murphy says they result in “more tooth movement.”

But even with a well-made and fit oral appliance, occlusal guides and jaw exercises are important to discuss with patients.

Addy says that while there might be a perception that using a guide or doing the exercises are “time consuming,” they don’t actually take that long to complete. Addy says it is important to tell patients to move the joint around in the morning to eliminate stiffness and return the bite to the correct position. But not all patients will see occlusal changes even if forgo jaw exercises. Case in point, Addy and her husband both wear oral appliances. While Addy must perform morning exercises every day to maintain occlusion, her husband has never had to.

Manufacturer ProSomnus provides its patients with a milled PMMA occlusal guide, but Murphy notes about half of his patients don’t use it, opting for exercises instead.

Manufacturer Oventus doesn’t make a morning occlusal guide.“Precision fabrication such as 3D print versus custom fabrication reduces risk of occlusal changes,” says Hart, adding, “I recommend exercises in the morning to ensure the condyles have re-seated—usually by the time the patient has finished eating breakfast.”

The recommended morning routine is typically simple with jig and jaw exercises, sometimes along with chewing hard gum (the latter being a secondline recommendation in the AADSM paper3), to work the muscles.

While changes may be troubling to a clinician, some may be met positively by patients, Addy says. For example, if an overbite improves, the patient may be quite pleased with that. But if a patient develops an underbite, this could cause chewing issues and then action will have to be taken.

Chewing hard gum is a secondline recommendation for occlusal management due to oral appliances, according to the AADSM.

Addy clearly discusses all of the possible side effects with her patients during the consent phase of treatment.

Other dentists agree with being upfront. “How we deal with long-term changes should be discussed and agreed upon at the consent stage,” Hart says. “There are known long-term side effects. It is important that the patient is aware of these, how they might affect them, and what potential treatments may be indicated to correct these changes. We should ask the patient if they would perceive an issue with tooth and/or jaw positional changes after informing them of how it might impact on their function or aesthetics.”

“I tell patients that their side effects should be mild, manageable, and reversible,” Hart adds. “This can be achieved through taking accurate records, precision manufacturing, and good clinical management. The short-term issues such as increased salivation, and tooth, muscle, or jaw tenderness almost always subside during the acclimation period. Ongoing periodic management and review of the patient and their device is critical in preventing and/or managing the longer-term issues such as jaw positional changes and tooth movement. It is also important to remember that while oral appliances that advance the mandible have the potential to alter tooth and jaw position, long term wearing of CPAP masks can have similar orthopedic effect in the opposite direction—impacting the middle third.”

Murphy says he’s transparent with his patients as well—putting the responsibility for their occlusal changes on their shoulders. “I tell them, ‘You’re responsible to get your bite back in the morning; my responsibility is to pull your jaw down and forward to open the airway.’”

Of course, patients do not always keep up their end of the bargain. For Addy, the patients who do not exercise their jaws fall into two broad categories: those who believe they don’t need to do the exercises, and those who admit that they’re too lazy to do them.

Since Addy handles patient history personally at her practice, she finds out if the patient is adherent very simply—she asks them. “If you ask point-blank if they’re using their aligner or doing their exercises, they’ll tell you,” she says.

Addy advises dentists to carefully monitor any changes that are occurring. To that end, it is important to get a baseline impression or other measurements to monitor how gradually—or quickly—things are shifting.

What’s more, dentists should be fully trained in fitting oral appliances before treating patients—and that training should consist of more than a weekend course, Addy advises.

But even more fundamentally, she notes that when a dental sleep medicine practitioner begins treating a patient, it must become a deeper relationship. “This is not just putting an appliance in. It’s the follow up,” she says. “This is a relationship, and you have to know how to take care of the patient to the best of your ability.”

In today’s complex health insurance landscape, the cost of a morning occlusal guide is likely going to be on patients’ minds as much as any potential changes to their bite or teeth positions.

Murphy notes that it’s difficult to separate out the cost of a morning occlusal guide from the other related devices. Typically all of the costs are tied together.

Hart sees a bundled approach as a fact of doing business. “The CPT Code for oral appliance therapy, E0486, is a bundled fee so if the patient requires a morning occlusal guide, I just include it in the fee; there is no additional cost to the patient. Likewise, if they require a different appliance within the period of reimbursement, I just include that in the fee,” he says.

For patients who are having significant issues, eliminating oral appliance therapy may be an option. Of course, that may place patient back at square-one with regard to treating their obstructive sleep apnea.

“No matter if you can recapture the bite or not, keeping the airway open is more important than a patient’s bite,” Murphy says.

Hart says, “We should ask ourselves the question that if we have been maintaining an advanced jaw position to keep the patient alive and healthy for several years, would we prescribe orthodontics and/or surgery to push the jaw back again? Probably not. If we were going to correct a craniofacial issue, I would be more likely to refer the patient for surgery/orthodontics to correct the craniofacial issues and the upper airway issues simultaneously. In fact, I present this treatment option to the patient at the initial consultation; however, I have not had a patient ask for surgery out of the gates. To date they have always elected for oral appliance therapy first with the knowledge that if things change, they have the option of surgery/orthodontics as a second—or third, if they have failed CPAP—line of therapy.”

That’s not to say that dentists shouldn’t keep occlusal changes in mind. In fact, Addy notes that the AADSM will be spending considerable time at its annual meeting (May 29-31 in New Orleans) discussing oral appliance side effects and will be posting videos on the academy’s website about performing a baseline examination prior to beginning therapy.

While he doesn’t wear an oral appliance for a sleep issue, Los Angeles-based freelancer C.A. Wolski knows the benefits of an occlusal guard firsthand—and the responsibility of wearing it regularly for both good dental health and a good night’s sleep.

Top image: Malocclusion is illustrated on a denture model. 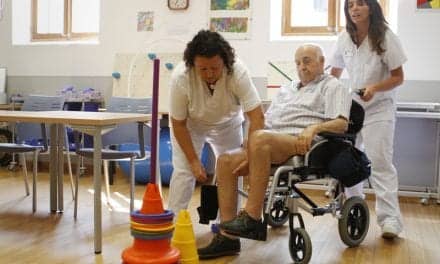 Is Sleep Apnea Related to the ‘Sperm Crisis’?