Market Forecast Good for Sleep Industry
A survey of sleep centers, conducted by Wachovia Securities, forecasts that the OSA market will grow more than 20% through 2007 and also reports that sleep center capacity is expected to increase 31% this year. The growth should prove to be advantageous to not only sleep sufferers but also manufacturers of sleep products.

“The results of Wachovia’s sleep center survey reflect encouraging growth in diagnostic capacity, which ResMed believes is critical in reaching the millions of undiagnosed sleep apnea patients in the United States alone,” said Hillary Theakston, director of investor relations for ResMed Inc, San Diego. “With all that we now know about the clinical benefits of treating obstructive sleep apnea and the potential savings to our health care system, there has never been a better time to invest in the treatment of this gravely under-diagnosed condition.”

According to Wachovia, average sleep center capacity is expanding.

“Around 15% of sleep centers plan to start selling equipment directly within the next 12 months, a positive, in our view, for both Respironics and ResMed, which have established relationships with physicians and sleep centers,” said Michael S. Matson, senior analyst, medical device equity research, Wachovia Capital Markets LLC, New York, who also notes that sleep centers are more likely to provide high-end equipment than home medical equipment suppliers.

Also predicted in the survey was an anticipated decline in Respironics’ share of prescriptions. According to the Wachovia Securities report, Respironics is expected to lose 2% of its flow generator prescription share throughout 2006 to companies like Fisher & Paykel and Puritan Bennett.

Different Drugs, Similar Outcomes
The wave of new sleeping pills on the market are effective treatments for insomnia, but they have different effects and no one drug stands out as the best, according to a new review of 141 studies on drugs including Sonata, Ambien, Lunesta, and Imovane. Reviewers from the Oregon Evidence-based Practice Center at the Oregon Health and Science University concluded that the drugs were better than placebo pills at treating insomnia symptoms, such as trouble falling asleep and staying asleep. There were few head-to-head comparisons of the drugs, however, and “although there are some differences between the drugs on some outcomes, no one drug appeared to be consistently superior,” said the Oregon reviewers, led by Susan Carson, MPH. The reviewers also found that short-term side effects such as headaches and daytime sleepiness occurred at similar rates with the drugs.

Genetic Link Found for SIDS
Steve A.N. Goldstein, MD, PhD, and colleagues from the Pritzker School of Medicine in Chicago have found that a specific mutation, called S1103Y, in a heart protein known as SCN5A, is associated with a 24-fold increased risk of sudden infant death syndrome (SIDS) in African American infants. The authors show that this mutant protein, when exposed to acidic conditions (which can be caused by low blood oxygen levels when infants are placed in the face-down or “prone” sleeping position), malfunctions in a way that has been previously shown to trigger an irregular heartbeat. The study appears in the February issue of the Journal of Clinical Investigation. 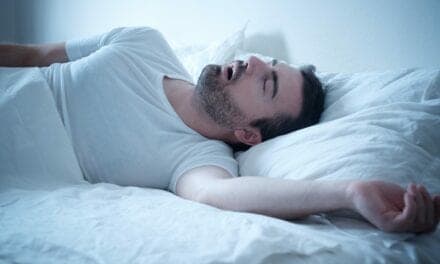 When Snoring is a Warning Signal

Obstructive Sleep Apnea Patients Benefit from Perioperative Use of CPAP