Could the key to mass acceptance of oral appliances for mild to moderate OSA be a recorder that’s smaller than a fingernail?

Good things come in small packages, so the saying goes. In the field of dental sleep medicine, many oral appliance manufacturers and dentists say that a burgeoning tiny-sized technology may prove that to be true. About a centimeter in diameter, microsensors that record compliance in oral appliance users have the potential to level the playing field with CPAP for mild to moderate obstructive sleep apnea (OSA) patients, these stakeholders say.

Oral appliance compliance monitoring tools aren’t new. From subjective measures such as patient sleep diaries and surveys to objective thermal recorders and mini-microphones, the technology is ever evolving. But the current generation of microrecorders makes great strides from past iterations, lending credence to the idea that objective compliance measurement could change the field. “What we’ve needed is something you can put into the appliance that works and that can’t be defeated,” says Kathleen Bennett, DDS, president-elect of the American Academy of Dental Sleep Medicine (AADSM). “Some of the previous thermal monitoring technologies could be deceived by placing the device in a hot water bath. With the new microrecorders, patients can’t fake it.”

The current microrecorders, dominated in the US dental sleep market by BRAEBON’s DentiTrac, also take advantage of the latest technology in data storage and transmission: cloud computing. Via a base station and web-enabled PC, DentiTrac (which launched commercially in the United States in 2013) extracts compliance data and wirelessly transmits it to the cloud. 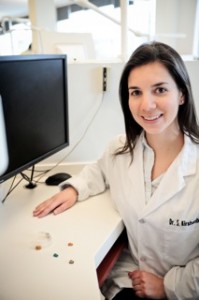 Stacey Kirshenblatt, BA, DDS, has done research on the reliability of thermo-sensitive microsensors.

So far, the microrecorders employed in the United States are mostly in research settings and are not common in clinical practice. Stakeholders differ in whether they think the measurement devices will become ubiquitous, and, if so, what the likely timetable will be. “It’s hard to know what’s going to lead,” Bennett says. “Is the dentist going to take the first stand and decide to prove that patients are wearing oral appliances? Or is an insurance company going to say it’s not paying for oral appliances until compliance can be proved? It’s a few more years off before we see how it shakes out.”

Stacey Kirshenblatt, BA, DDS, a third-year orthodontic resident under the supervision of Dr Fernanda Almeida at the University of British Columbia in Canada, has done research on the reliability of thermo-sensitive microsensors.1 She compared three manufacturers’ sensors (two of which, by Germany-based companies TheraMon and Air Aid, are currently not available in the United States) and found the sensors to be reliable in logging wear time. She predicts that more manufacturers will enter the market. “As the use of these sensors is also important for the orthodontic population and the use of removable appliances, it is likely that other companies may start the development of similar technology in the future. It is going to be a large market,” Kirshenblatt says. 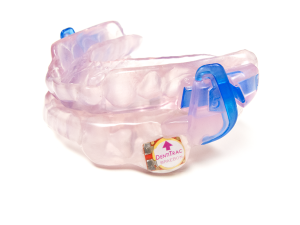 BRAEBON has distribution agreements with oral appliance manufacturers such as SomnoMed, whose SomnoDent G2 is shown.

Who Are the Early Adopters? 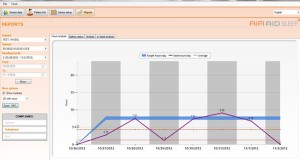 Similar to CPAP compliance data, oral appliance data can be charted to see how the patient is doing night by night.

TheraMon launched in Europe at the end of 2010. Since that time, more than 40,000 sensors have been purchased, according to the company. In July 2011, the Dutch healthcare system began reimbursing for the electronic microsensors “for the reason of increasing patient awareness on treatments, leading to better compliance resulting in much better treatment performances,” says Ing. Gerhard Gschladt, TheraMon CEO. Gschladt says the early adopters in Europe have proven to be orthodontists who are treating young patients with removable appliances, such as post-braces retainers. In 2013, TheraMon registered with the Food and Drug Administration in anticipation of entering the US market. Gschladt does not expect orthodontists to be early adopters in the US market, but he does expect dentists specializing in sleep medicine to be interested.

The transportation sector may prove to be an early adopter of oral appliance microrecorders throughout several regions of the globe. Emil Krumholz, DDS, MD, medical supervisor of the Air Aid Center for Snore Prevention in Frankfurt, Germany, (makers of the Air Aid Sleep sensor) says, “We have received signals of very strong interest from the German Department of Transportation, the German Department of Defense, and private air carriers. We expect that in the next 2 to 5 years all insurance companies and health carriers will demand compliance measurement for all oral appliance therapy.”

BRAEBON too has seen early interest from the transportation sector and received strong positive feedback from sleep laboratory physicians and sleep dentists worldwide. “In addition, we have received interest from other specialties within dentistry,” Bonato says.

What Other Considerations Are There? 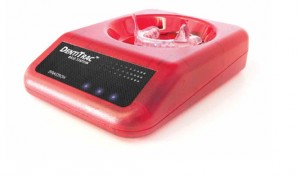 The BRAEBON DentiTrac base station plus a web-enabled PC means a patient can drop their oral appliance in, then the data will be extracted out.

Significant antideception technologies are included in these new microsensors, such as requiring both a specific temperature range and head movement to count toward compliance, so the potential for fraud that existed in old sensors is being addressed. A main hurdle to adoption now is “cost, cost, cost,” says Charles Collins, chief operations officer of Airway Management, which offers appliances with compliance monitors. “We’ve had few orders to date, primarily due to pricing. I believe it will become more mainstream when industries (ie, transportation) begin to require it.”

In addition to cost, Bennett says the embedding material will be key to widespread adoption. “You may have different responses in different types of acrylic,” she says.

Kirshenblatt recommends further testing to examine whether the accuracy of the microsensors is affected by battery life. “Our trial only lasted 30 days, so it is unclear if the microsensors are as accurate toward the end of their lifespan,” she says. Another area for future research, she adds, is the positioning of the microsensors in the appliance (palatally or buccally) to evaluate if placement may be a factor in their accuracy.

Finally, Kirshenblatt says, “The ultimate and logical area for the use of the microsensors is in randomized clinical trials comparing the effectiveness of oral appliance and CPAP.”

Will Microrecorders Truly Level the Field?

Sleep product manufacturer ResMed is in a unique position because it makes both CPAPs and oral appliances. Kristie Burns, general manager, dental sleep,  says, “Compliance monitoring is fine and may one day even be required, but, if you look at the documented hurdles, compliance isn’t the problem with oral appliances,” Burns says. “Objective and subjective reporting of oral appliance use has shown, repeatedly, that the patients who say they’re wearing oral appliances are, in fact, wearing them.2

“An objective measurement won’t change the experience for the patient or the payor. Just because there’s a compliance challenge with CPAP, it doesn’t mean all OSA therapies have a compliance problem.”

ResMed’s strategy is to overcome the main hurdle the company has identified as hindering oral appliances’ growth: consistent efficacy data. “If you want to grow oral appliances, you need to prove they work well for most patients, not that patients are using it,” Burns says. To that end, ResMed is focused on studies of its oral appliances that will show the therapy’s effect on the apnea/hypopnea index (AHI). “In the CPAP world, the device tells you it’s working. It reports the AHI, residual leak rate, and sleep effectiveness. It doesn’t simply report that it was on.” Burns says oral appliance prescriptions will reach a new level of growth when the research demonstrates consistent and reproducible efficacy in a majority of patients.

What Does the Future Hold?

In 2013, TheraMon registered with the Food and Drug Administration in anticipation of entering the US market.

At the offices of microsensor manufacturers, future generations of the measuring recorders are already being developed. At Air Aid Sleep, which is actively looking for a North American distributor, plans are in action to eliminate its existing interval of 5 minutes between recordings in favor of a continuous measurement process. The company also is looking into substituting the patient’s smart phone for the reader at the doctor’s office.

BRAEBON’s Bonato, too, says enhancements are in the works. Bonato, though, cautions to always keep the technological advancements in perspective: “It is important to focus on patient choice and options, rather than on whether one type of therapy is superior or inferior to another type of therapy. No single therapy type is best for everyone. Our goal is to offer clinicians and patients choice and enable them to make decisions best suited for their needs.”

How Do I Prepare for the Changes?

Now is a prime time for sleep physicians and sleep dentists to align, AADSM’s Bennett says. If you’re looking for a qualified dental sleep medicine specialist in your area, a good place to start is www.aadsm.org/findadentist.aspx, where you can search by zip code.

If you are a dentist, Bennett encourages you to visit the American Board of Dental Sleep Medicine website (www.abdsm.org) to find out what is required to be certified. “It’s a real stamp of approval that makes a difference to physicians,” Bennett says.

Bennett also recommends subscribing to AADSM’s Journal of Dental Sleep Medicine, which launched in April, and to Sleep Review, and attending conferences such as the AADSM Annual Meeting to stay abreast of the latest developments.

Who are the oral appliance manufacturers?

Technology companies such as BRAEBON work with an array of oral appliance manufacturers to make their microrecorders accessible to patients. Contact device makers via our online buyer’s guide to find out about compliance monitoring options they may have available.

The Evolution of Dental Sleep Medicine with Mitchell Levine 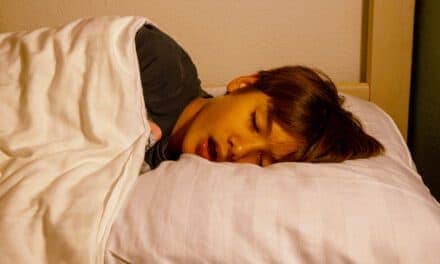