Could bacteria in your gut be used to cure or prevent neurological conditions such as post-traumatic stress disorder (PTSD), anxiety, or even depression? Two researchers sponsored by the Office of Naval Research (ONR) think that’s a strong possibility.

“This is extremely important work for U.S. warfighters because it suggests that gut microbes play a strong role in the body’s response to stressful situations, as well as in who might be susceptible to conditions like PTSD,” says Linda Chrisey, PhD, a program officer in ONR’s Warfighter Performance Department, which sponsors the research, in a release.

The trillions of microbes in the intestinal tract, collectively known as the gut microbiome, profoundly impact human biology—digesting food, regulating the immune system, and even transmitting signals to the brain that alter mood and behavior. ONR is supporting research that’s anticipated to increase warfighters’ mental and physical resilience in situations involving dietary changes, sleep loss, or disrupted circadian rhythms from shifting time zones or living in submarines.

Through research on laboratory mice, Bienenstock and Forsythe have shown that gut bacteria seriously affect mood and demeanor. They also were able to control the moods of anxious mice by feeding them healthy microbes from fecal material collected from calm mice.

Bienenstock and Forsythe used a “social defeat” scenario in which smaller mice were exposed to larger, more aggressive ones for a couple of minutes daily for 10 consecutive days. The smaller mice showed signs of heightened anxiety and stress—nervous shaking, diminished appetite, and less social interaction with other mice. The researchers then collected fecal samples from the stressed mice and compared them to those from calm mice.

“What we found was an imbalance in the gut microbiota of the stressed mice,” says Forsythe. “There was less diversity in the types of bacteria present. The gut and bowels are a very complex ecology. The less diversity, the greater disruption to the body.”

“Not only did the behavior of the mice improve dramatically with the probiotic treatment,” says Bienenstock, “but it continued to get better for several weeks afterward. Also, the MRS technology enabled us to see certain chemical biomarkers in the brain when the mice were stressed and when they were taking the probiotics.”

Both researchers said stress biomarkers could potentially indicate if someone is suffering from PTSD or risks developing it, allowing for treatment or prevention with probiotics and antibiotics.

Later this year, Bienenstock and Forsythe will perform experiments involving fecal transplants from calm mice to stressed mice. They also hope to secure funding to conduct clinical trials to administer probiotics to human volunteers and use MRS to monitor brain reactions to different stress levels.

Gut microbiology is part of ONR’s program in warfighter performance. ONR also is looking at the use of synthetic biology to enhance the gut microbiome. Synthetic biology creates or re-engineers microbes or other organisms to perform specific tasks like improving health and physical performance. The field was identified as a top ONR priority because of its potential far-ranging impact on warfighter performance and fleet capabilities. 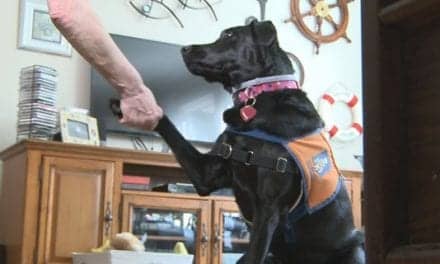