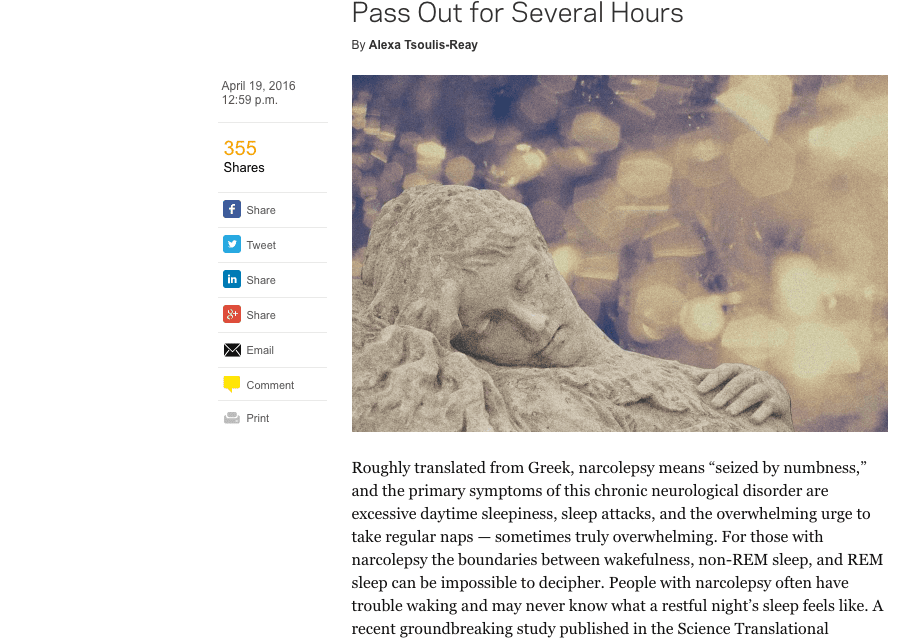 Narcolepsy, a neurological disorder that leads to episodes of irresistible sleepiness, is popularly portrayed in comedy. However, the reality is that narcolepsy is a debilitating disorder that is not well understood. Sleep medicine professional recently raised the alarm on an article that conveyed misleading descriptions of the rare disorder.

In April, New York magazine published an interview with a woman who described her experience with narcolepsy and cataplexy in a piece titled “What It’s Like to Periodically Collapse and Pass Out for Several Hours.”

In the interview, the patient describes her experience with narcolepsy and goes into detail about what happens during a cataplexic episode. Among some of the experiences the 34-year-old model and person with narcolepsy describes include: throwing up, inability to control her bladder and that “everything is released.”

While many readers have shared and read the article as another piece of coverage of a widely misunderstood disorder, some experts from the sleep community are concerned about the published account.

The leading comment of the article states the following:

“While it’s always great to see coverage of a disorder as widely misunderstood as narcolepsy, it’s unfortunate that this article perpetuates some of the stereotypes surrounding narcolepsy. While I respect all patient experiences and appreciate this woman’s willingness to share her story, this article does not reflect the ‘typical’ narcolepsy patient (and yes, I realize this particular magazine section is called Atypical). Most people with narcolepsy/cataplexy do not just pass out at the drop of a hat and vomit or lose bladder/bowel control. This would be extremely rare.”

Jonathan Lown, MD, a sleep physician and medical director at Delta Sleep Center expressed to Sleep Review his concerns about several parts of this patient’s account.

“Cataplexy is not syncope; it’s more of a transient loss of muscle tone and is by definition not related to bladder or bowel control,” Lown says. “Unless something can cause a massive outflow from the vagus nerve while you’re awake, the rest of [the article’s] picture doesn’t make any sense.”

In fact, when a patient loses bladder or bowel control, it almost excludes the diagnosis of cataplexy, Lown says.

Because narcolepsy is a sleep disorder that is still not widely understood, Lown says it’s a cautious diagnosis to make. “I would expect an editor run this account by an expert,” Lown says. “Narcolepsy is a condition that is understood by very few people, I’m not sure what she has, but she certainly does not have narcolepsy in the way that she is describing it.”

Increasing Sleep Technologists Proficiency in the Diagnostic Process of Narcolepsy