Narcolepsy type 1 is distinct from other hypersomnias in several ways. People diagnosed with it must have sleepiness and either objectively low levels of the hypothalamic neuropeptide orexin (also known as hypocretin) or cataplexy and a positive multiple sleep latency test.

While that sounds straightforward, in practice the differential diagnosis is frequently murky. There are no commercial labs currently offering direct orexin testing, says neurologist and sleep medicine specialist Brynn Dredla, MD, so that assay is not an option. Then, while some patients experience obvious falls or injuries as a result of cataplexy, many patients who have experienced mild bouts of muscle weakness don’t recognize it for what it truly is. So, as Dredla tells Sleep Review in person during a poster session at American Academy of Neurology’s (AAN) 70th Annual Meeting, she and her research colleagues asked, “Is there another surrogate biomarker we can use?”

As Dredla explains, STREAM is calculated using data from the chin electrode during a sleep study. In healthy sleepers, this electrode data flatlines during REM sleep, since the body loses muscle tone during this sleep stage. But if the chin electrode detects muscle tone during REM sleep, this indicates a problem. STREAM is a computerized algorithm patented by the University of Michigan that specifically analyzes this REM muscle tone variance score throughout a sleep study. “This is a variable that can done on any sleep study at no increased cost and could aid in discerning whether a person has narcolepsy type 1 or a different hypersomnia,” Dredla says.

Coincidentally, a separate study—this one in children ages 6-18—has also recently found that nocturnal REM sleep without atonia is a “very good”” diagnostic biomarker of pediatric narcolepsy as well.

So in the future, analyzing muscle tone during REM sleep may be an accessible and cost-effective biomarker that might help people of all ages living with hypersomnias receive more accurate diagnoses.

How Sleep, Zombies, Duct Tape and More Can Earn You Money for College 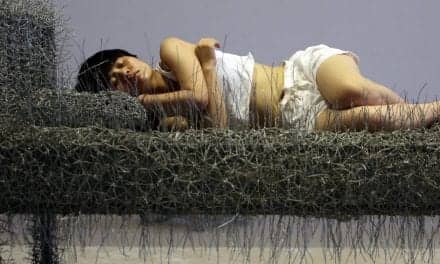 Representations Of Sleep Paralysis, Narcolepsy, And Other Conditions: When Innocent Sleep Turns Into Terrors