When it comes to recruiting patients, hospital-based sleep diagnostic laboratories usually have the security of a built-in referral base—but most independent diagnostic testing facilities (IDTFs) don’t have that luxury. For International Sleep Network (ISN), a growing network of IDTFs with headquarters in Iselin, NJ, building a loyal referral base means being the authority on sleep medicine in the communities it serves.

Since opening its first four-bed center in Old Bridge, NJ, in 2005, ISN has launched a total of nine facilities in four states, and the company plans to double in size over the next 12 months. The secret to ISN’s rapid growth lies in anticipating how the relatively new industry of sleep medicine will mature, and then building a model that can be duplicated anywhere in the country. For example, when ISN founders and partners Vivek Garipalli, Rajesh Grover, and Priti Pandya-Patel decided to open the first center in their home state of New Jersey, they learned that this was also a first for the Garden State, which gave the partners an opportunity to lead the way in the independent sleep center arena.

“There are actually no state regulations written for sleep facilities in New Jersey yet,” Garipalli says. “Our Old Bridge lab was one of the first independent labs to be licensed by the state and to be IDTF certified. Our company has been asked to assist in writing the guidelines for the state regulations for independent sleep labs.”

When planning their first sleep lab, Garipalli and his partners wanted to make sure that their plans would meet future government restrictions as well. “We operate under the assumption that eventually all states are going to have stricter rules—which they don’t really have right now,” he says.

The partners decided to use the requirements for ambulatory surgical centers as a model. Not only would these guidelines serve to anticipate tighter government restrictions, but they could also significantly raise the barrier of entry for competitors.

Once the Old Bridge site was up and running, the ISN team spent the next few months refining their processes and learning the intricacies of working with insurance companies, patients, and referring physicians. Soon, the partners felt comfortable enough to replicate their efforts elsewhere, and they opened up centers in both Abilene and Longview, Tex, a state that, like New Jersey, had not yet established requirements for independent sleep laboratories. Next, ISN launched facilities in Pennsylvania (Bensalem), Florida (Jupiter, West Palm Beach, and Palm Beach Gardens), and two more in New Jersey (Lawrenceville and Iselin)—all based on the Old Bridge prototype. The network has four-bed, eight-bed, and even 12-bed facilities in the four states it serves.

All ISN centers are designed to have the feel of a luxury hotel, such as a Ritz-Carlton. To achieve the atmosphere of a luxury hotel, the company invests between $80,000 and $120,000 on leasehold improvements for a four-bed facility. Each spacious bedroom includes an attached bathroom with a sink, and every facility has at least two showers. Bedrooms are also outfitted with flat-screen televisions, a sometimes controversial addition for sleep centers. “Our philosophy is that the bedroom and the experience have to really resemble what the patient’s home environment is, because without that, you’re not going to be able to get a true comparable,” Garipalli says. “Some people fall asleep with the TV on, and they need that there.”

To improve time and cost efficiency, ISN employs 20 physicians in India to do all of the scoring. The raw data from all studies is collected electronically at ISN headquarters in Iselin, then sent over to India. The scoring physicians are certified in India, and their results are QC’d by another physician in India who is certified in the United States. The data is sent back to the United States, where it is reviewed by a registered technician. Finally, a board-certified sleep physician reviews the results before going over them with the patient.

“There are definitely a lot of checks and balances going on, and it really makes for good reports,” Garipalli says. It also speeds the process. While Garipalli says New Jersey hospital-based laboratories typically need 2 to 4 weeks to produce a signed interpretation, ISN can turn around a scored study and signed interpretation within 72 hours, and the average cost of scoring falls below $20.

ISN, which performs about 1,000 studies per month, also implemented centralized billing and collections and is working toward using all electronic medical records. All sleep studies are billed the same day they are performed, and the billing team follows up on every claim within 2 weeks. Across the four states ISN serves, an average of 40% of patients have Medicare, while the rest have third-party insurance providers. Whenever a new ISN location opens, staff ensure that all insurance providers have the company properly listed—otherwise, claims may be denied or delayed.

While sleep studies are conducted at night, every ISN facility is open 24 hours. “We’re really focused on using the space intelligently—not just at night, but during the day,” Garipalli says.

The centers provide several services and programs during the day, including a weight-loss program. “You need to provide patients with a real solution on how to combat sleep apnea,” says Garipalli, noting that 60% to 70% of patients with sleep apnea are overweight. ISN also offers pulmonary-function testing, EEG testing, and, in two of the Florida centers, physical therapy.

One Florida center even functions as a surgery center during the day, a rarity for independent sleep laboratories. Garipalli attributes this opportunity to the strict regulations ISN adopted for its facilities early on. “Because we set it up like that, we’re able to do many different things that other facilities can’t do, and it provides a better service to our physicians as well,” he says.

Pulmonologists are typically the main referral source for sleep laboratories; however, nearly 80% of referrals to ISN are nonpulmonologists. These physicians include cardiologists, neurologists, bariatric specialists, and primary care physicians. One of the unique aspects of marketing in the sleep arena is that there is still a large awareness gap, even within the physician community. Garipalli attributes the success of ISN’s expansion to the company’s marketing approach with physicians, which often includes educating potential referral sources about the signs and symptoms of sleep apnea, as well as how ISN’s services can benefit patients. “We’re trying to be proactive, be their partner, and help them identify sleep apnea among their patients,” he says.

Since ISN has begun its education efforts with referring physicians, it has noticed a significant increase in diagnoses of sleep apnea. “When physicians start proper screening programs, a cardiologist who is seeing 20 patients a day will find six to eight of them are at high risk for having sleep apnea,” Garipalli says. “When they actually get a sleep study with us, we’re finding that 80% of the patients who come into our facility are actually diagnosed positive for sleep apnea.”

Securing loyal referral sources also means demonstrating outstanding levels of service. For example, if a patient is unable or unwilling to undergo a sleep test at an ISN facility, ISN will arrange an attended in-home study, even at the risk of not being reimbursed. “We get paid on enough things where we run a profitable operation,” Garipalli says. “But to really have a good reputation in this space, we sometimes have to do things where we know that maybe the insurance company is not going to pay us, but it’s just good medicine.”

In the next 12 months, ISN has aggressive expansion plans, which include opening four facilities to cover the New York City metropolitan area. “We’re trying to focus on areas that may have hospital sleep labs, but they may not have a penetration of really high-quality independent sleep labs,” Garipalli says.

The continued success of ISN depends on the company’s flexibility. Garipalli expects significant changes in how sleep medicine is regulated in the next few years. With the increasing awareness of this specialty, it will not be a surprise if more stringent government regulations arise or even if a rival technology to CPAP appears on the market down the line. To make sure that ISN remains adaptable throughout these changes, the company will depend on the strong relationships it is building now with referring physicians.

The key is establishing the company as a sleep medicine authority from the very beginning. “The referral is still going to come to us because we’re seen as being the knowledgeable ones in the community about sleep, and we’ll determine what the best course of diagnosis is for the patient,” Garipalli says. “If all of a sudden things change, we feel that we’re ready to adapt.”

Ann H. Carlson is a contributing writer for Sleep Review.

The Pursuit of Perfection

Is the RPSGT Credential for You? 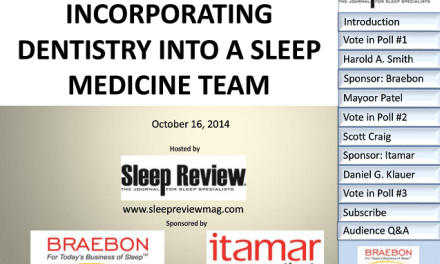