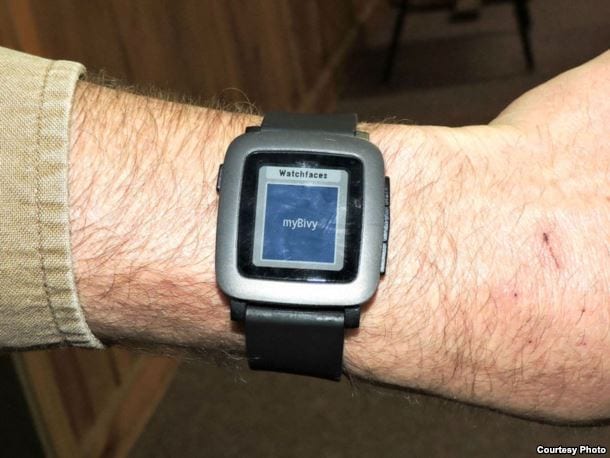 To help his father who had PTSD and sleep disturbances, Tyler Skluzacek developed the myBivy smartphone app that is designed to prevent an oncoming night terror.

Tyler Skluzacek teamed up with three participants from other universities to create an app that would solve the problem. They called their team “The Cure,” and in less than two days, they came up with the solution: myBivy; short for bivouac, a military term for a safe place to sleep.

“[it is a] smartphone/smartwatch application,” he explained. You need both to run it. The person with traumatic nightmares wears it on their wrist when they go to bed. They hit start on the phone. And for the first time or days of wearing it, myBivy just watches you.”

At first, myBivy monitors the sleeper’s movements and heart rate. Increasing heartbeats indicate a nightmare is about to set in, and that causes the watch to gently vibrate. The vibration is enough to disturb an oncoming night terror without disturbing the person’s deep sleep.

“… I was wearing the watch for two weeks and Tyler never told me when he turned it on,” said Patrick Skluzacek. “He has linked his phone to my phone so he can control it. He turned it on on Veterans Day last year. Apparently that night it kept me out of 10 different nightmares. I never slept the whole night. He called me like two days after and asked me how my watch is working. I said I don’t know because I’m just sleeping okay now. He told me that he had turned it on.”

After winning the top prize at HackDC and receiving $1,500 for the best PTSD Mobile App for Clinicians, the team started a fundraising campaign.

View the full story at www.voanews.com

Study: Benefits of Melatonin Use in Older Adults

ISU Students Give Away Free Pillows; Stresses Importance of Sleep

Is it Possible to Make Sleep Paralysis Symptoms Less Terrifying?