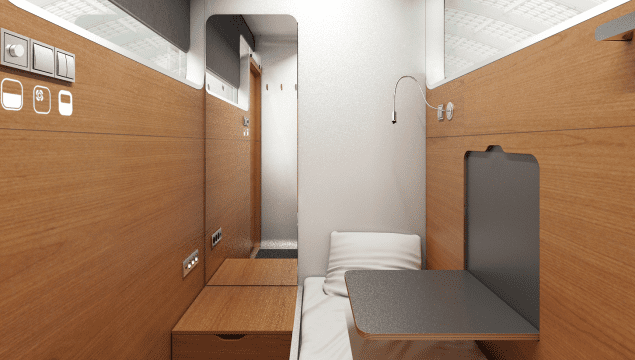 According to a Boston Inno report, the startup Sleepbox is bringing its nap cabins, which can be set up in any public place, to Boston.

Sleepbox – a startup that’s recently set Boston roots – is making our wildest dreams come true: You will soon be able to sleep soundly and safely in any public place conceivable. As the name implies, the company has developed cozy, technologically decked-out cabins that can be set up just about anywhere – in airports, offices or downtown metropolitan areas – and rented by folks looking to catch some Zs.

How did this visionary venture come about? According to Mikhail Krymov – CEO of Sleepbox and research fellow at MIT – he and his business partner Alexey Goryainov started it as a theoretical side project for their architecture firm Arch Group. The two professionals travel a lot for work and were constantly subjected to flight delays and layovers where all they could do was wish for a comfortable, private place to rest. From their personal experience, they created an initial design for Sleepbox. But it was meant only as a concept, at first.

“It was just a design idea, but then it was published – it was actually published quite a few times – we started receiving requests and orders from all over the world,” Krymov told me.

So they figured, why not make them for real? Currently, there are several locations throughout Europe that feature about 60 of Sleepbox’s clean, soundproof and fully ventilated cabins. And now that Krymov is at MIT, they’re doubling down to relaunch the startup – only this time, in the U.S.

View the full story at www.bostinno.co