Combat Dreams Haunting Veterans Could Be A New Disorder

A sleep medicine specialist for the US Army has identified a new syndrome called Trauma-Associated Sleep Disorder impacting soldiers.

“This disorder has some similarities with both Post-Traumatic Stress Disorder (PTSD) and REM Behavior Disorder (RBD), in which people act out their dreams, but it does not respond to the characteristic treatment for either of those,” Col. Vincent Mysliwiec told The Huffington Post. “Most importantly, it’s observed among young veterans who were deployed in active combat.”

Mysliwiec, who is based at Brooke Army Medical Center in San Antonio, began observing hard-to-classify sleep disturbances among veterans returning from Operation Iraqi Freedom in Iraq and Operation Enduring Freedom in Afghanistan around 2008. He outlined the diagnostic criteria for TSD in a 2014 article in the Journal of Clinical Sleep Medicine.

Most TSD sufferers don’t experience daytime symptoms, like flashbacks, which are a hallmark of PTSD. The drug Clonazepam, which treats PTSD, is ineffective on TSD symptoms. And unlike in RBD, the nightmares in this syndrome are usually replays of a traumatic combat experience, rather than generalized scary dreams.

Mysliwiec hopes that if the American Academy of Sleep Medicine accepts this diagnosis, more resources can be directed towards its study and treatment.

“Classifying something is the best way to evaluate it,” he said. 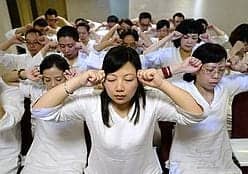 Back To Basics Course As Chinese Get Lessons In Sleeping