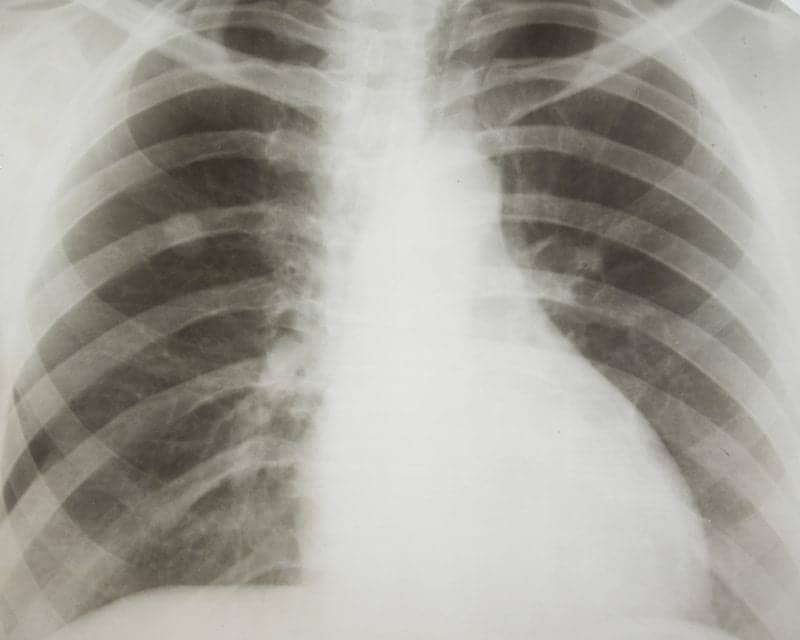 A team of researchers from the University of Chicago and the University of Barcelona has found that intermittent hypoxia can increase tumor growth by promoting the release of circulating exosomes. Their results are published in CHEST.

Obstructive sleep apnea (OSA) has been associated with increased incidence of cancer and mortality. In order to better understand the connection between the two, investigators took a detailed look at lung cancer tumor cell growth in mice. Half of the mice experienced regular breathing patterns, while the other half were exposed to intermittent hypoxia (IH) to simulate OSA. The team found that exosomes released in the mice exposed to IH enhanced the malignant properties of the lung cancer cells.

Exosomes are microscopic spheres that transport proteins, lipids, mRNAs, and miRNAs between cells, similar to courier messengers delivering packages. They play a central role in cell-to-cell communication and are involved in promoting cancer cell growth. When exosomes increase in number and change their content, tumors become bigger and metastasize more easily.

“Exosomes are currently under intense investigation since they have been implicated in the modulation of a wide range of malignant processes,” says lead investigator David Gozal, MD, MBA, Department of Pediatrics, Pritzker School of Medicine, The University of Chicago, in a release. “Hypoxia can increase exosomal release and selectively modify exosome contents such as to enhance tumor proliferation and angiogenesis. We found the overall concentrations of plasma-isolated exosomes in IH-exposed mice were significantly increased.”

Data revealed that exposing the mice to IH increased the number of cancer friendly exosomes. These exosomes increased the speed at which cancer cells replicated and promoted the movement of those cells throughout the body, disrupting the endothelial barrier and increasing the likelihood of metastasis. Researchers also found that when they isolated the exosomes from mice that had been exposed to IH, the extracted exosomes promoted malignant cell properties in vitro. Furthermore, exosomes from actual patients with OSA showed the same effects on human cancer cells in culture when compared with exosomes from the same patients after treatment of their sleep apnea with CPAP.

“Over the past few years, exosomes have emerged as critically important players in intercellular communication,” noted Dr. Gozal. “Notably, several studies have demonstrated the role of tumor exosomes in regulating major processes of tumor progression, such as angiogenesis, immune modulation, and metastasis.”

Researchers also examined the miRNAs released by the exosomes and found differences in the miRNA from mice exposed to IH compared with those with regular breathing patterns. Eleven discrete miRNAs were identified, along with their gene targets inside the lung cancer cells. “The fact that IH elicits altered exosome miRNA content and selectively enhances specific properties of tumor biology provides a strong impetus and rationale for future studies in both mice and humans,” commented Dr. Gozal.

Sleep apnea’s variable oxygen levels cause damage that is detectable even at the tissue level. Although many other confounding factors exist, sleep apnea is shown to be an independent factor associated with adverse cancer outcomes. This study illustrates that exosomes, invigorated by IH, can influence tumors by facilitating their growth and helping them spread throughout the body, making cancer potentially more dangerous for patients who suffer from sleep apnea.

“There is no doubt,” concluded Dr. Gozal, “that improved understanding of the complex network of genes and cellular signaling transduction pathways regulated by exosomal miRNAs in the context of obstructive sleep apnea will augment our knowledge on its potential deleterious effects among cancer patients.”

Researcher Gets Grant to Study Sleep in Pediatric Cancer Patients