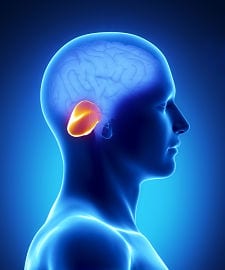 For the first time, researchers have identified a specific group of cells in the brainstem whose activation during rapid eye movement (REM) sleep is critical for the regulation of emotional memory processing. The findings could help lead to the development of effective behavioral and pharmacological therapies to treat anxiety disorders, such as post-traumatic stress disorder, phobias, and panic attacks, according to new research from Boston University School of Medicine, published in the Journal of Neuroscience.

Both REM and non-REM sleep are necessary to maintain health and to regulate multiple memory systems, including emotional memory. But during REM sleep, glutamatergic cells within a specific region of the brainstem (called the pons) generate phasic pontine waves (P-waves). According to researchers, the P-waves generated in the brainstem play an important role in regulating emotional memory.

However, in patients suffering anxiety disorders as a result of memories of fearful experiences, such as PTSD, REM sleep is disturbed, which affects P-wave production.

As part of the study, researchers used contextual fear extinction training, which works to turn off the conditioned fear, to study which brain mechanisms play a role in the success of exposure therapy.

Fifty-seven percent of subjects retained fear extinction memory, meaning that they did not experience the fear, after 24 hours. Researchers noted there was a tremendous increase of phasic P-wave activity among those subjects.

“The study results provide direct evidence that the activation of phasic P-wave activity within the brainstem, in conjunction with exposure therapy, is critical for the development of long-term retention of fear extinction memory,” said the study’s lead author, Subimal Datta, PhD, a director and principal investigator at the Laboratory of Sleep and Cognitive Neuroscience at BUSM.

Future research will explore how to activate this mechanism in order to help facilitate the development of new potential pharmacological treatments that will complement exposure therapy to better treat anxiety and other psychological disorders.

7 Things Healthy People Do Before Bed

Orexin May Be Target for Alzheimer’s Prevention

Lack of Sleep Is Linked to Obesity, New Evidence Shows