The National Healthy Sleep Awareness Project has launched “Awake at the Wheel,” a public education campaign that educates drivers of all ages about the risks of driving while drowsy in order to reduce avoidable accidents and save lives.

To kick off the public awareness campaign, Dr Nathaniel Watson, president-elect of the American Academy of Sleep Medicine (AASM), spoke at the National Transportation Safety Board’s Highway Safety Forum “Awake, Alert, Alive: Overcoming the Dangers of Drowsy Driving” on October 21 in Washington. Watson discussed recommended solutions to prevent drowsy driving among novice drivers, such as mandating drowsy driving instruction as a requirement for driver’s education programs and including comprehensive information about drowsy driving in state curricula and driver’s manuals.

“Drowsiness is similar to alcohol in how it compromises driving ability by reducing alertness and attentiveness, delaying reaction times, and hindering decision-making skills,” Watson says in a release. “Drowsy driving is deadly, but it can be prevented.”

Drowsy driving prevention is a pillar of the Healthy Sleep Project, which is funded by the CDC and led by the AASM in collaboration with other partners such as the Sleep Research Society (SRS). The project partners endorsed the AASM’s new Drowsy Driving Health Advisory, which urges every driver to take responsibility for staying “Awake at the Wheel” by making it a daily priority to get sufficient sleep, refusing to drive when sleep-deprived, recognizing the signs of drowsiness, and pulling off the road to a safe location when sleepy. 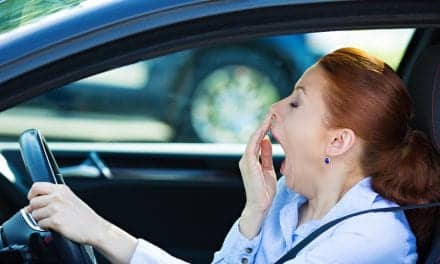 Bariatric Surgery Is No Quick Fix for OSA