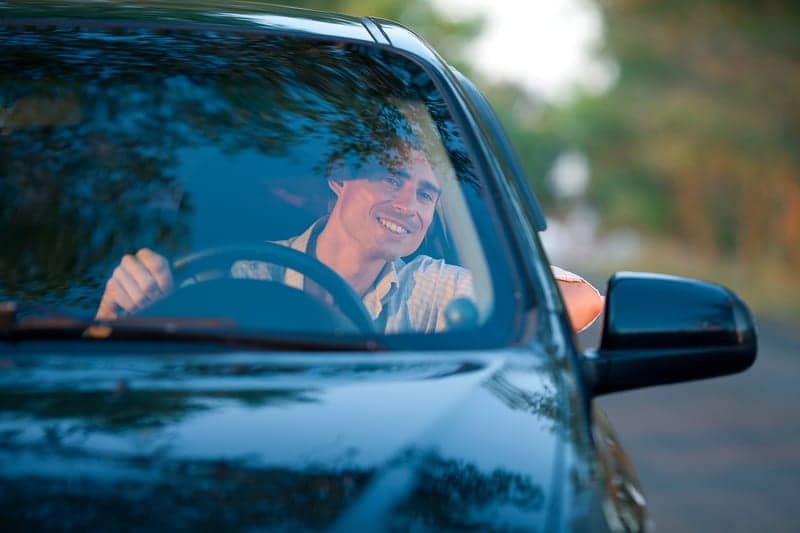 The results are a wake-up call: While the #1 method, drinking caffeinated beverages, can be a temporary, yet not fully effective fix, drivers report they’re more likely to open windows, pull over and exercise/stretch, and blast loud music and the air conditioning (which studies indicate have very short-term to no effect), than do what safety experts recommend most: pull over and take a nap. 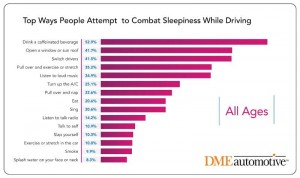 Pulling over and napping (only 23% reporting) ranked 7th, on par with eating or singing (21%). The findings indicate most drivers are doing things to fight sleepiness at the wheel that don’t work, and it’s likely contributing to the scary statistics: drowsy driving is responsible for somewhere between 15% and 33% of all fatal crashes,1 or more than 100,000 accidents each year.2

The DMEa survey of 2,000 car owners3 also found that a lot of drowsy drivers may be out on the roads these next months. The majority (53%) of US drivers reported that they are taking a road trip this summer, and that they plan to drive at least 7 hours each day–with 1 in 10 reporting they plan to drive more than 12 hours.

“The recent crash involving Tracy Morgan was tragic, and draws attention to an incredibly dangerous driving behavior that doesn’t get taken nearly as seriously as drinking or texting while driving,” says Mary Sheridan, director of research and analytics for DMEautomotive, in a release. “This survey reveals a big problem: when people get sleepy on the road, too many take measures that simply don’t work. Most of us do ineffective things like stopping for that third triple-shot cappuccino or slapping water on our face just to keep going. As drivers, we need to heed our drowsiness: and stop and sleep, or let a rested person drive.”

Notably, among the top 15 things drivers do to fight drowsiness, only #3 (switching drivers, provided they’re rested) and #7 (pulling over and napping) are supported as working by medical evidence and safety experts. For the #1 method, drinking caffeine, the expert consensus is that while it does temporarily boost driver alertness, it’s no replacement for sleep.

The top five strategies for drivers of all ages, as reported in the survey, are:

The top five strategies for young drivers, as reported in the survey, are:

DMEa aggregated authoritative and available medical evidence on which “fight the drowse” strategies work, and which don’t.

Drinking caffeine: Caffeine can be an effective, if temporary, drowsy-driving fighter, but should not replace sleep. Caffeine doesn’t overcome the effects of drowsy driving: for instance, you can still experience “micro-sleeps,” falling asleep for a few seconds unconsciously. And because caffeine doesn’t enter the bloodstream for 30 minutes, scientists recommend the “caffeine nap”: taking a 30-minute nap first, then drinking the equivalent of 1-2 cups of strong coffee.

Opening window/sunroof: No evidence of benefit.

Pulling over to exercise/stretch: Contrary to what many people may imagine, offers very little benefit. Exercise only provides a very temporary alertness effect (lasting 10-15 minutes) in studies.

Loud music: No benefit, and can serve to distract drivers from their drowsiness.

Turning up AC: No real benefit.

Napping: Studies have shown naps between 20 minutes and 3 hours prevent fatigue and restore alertness. Experts recommend scheduling a driving break every 2 hours, and napping. Napping is, however, not a substitute for longer sleep, and getting at least 7 hours sleep before a long drive is critical. Drivers’ main sleep periods should happen at night, driving between midnight and 6 AM should be avoided, as should rotating night and day duty.

The Consensus: Just stop driving if you’re sleepy, and the only real recovery strategy is sleep.

1 Centers for Disease Control & Prevention data
2 NHTSA data
3 Conducted spring 2014
4 For instance, drivers age 16-24 are nearly twice as likely to be in a drowsy-driving crash than those aged 40-59. (Univ. of Maryland Medical Center)

Why Are Parents Afraid of Later School Start Times? 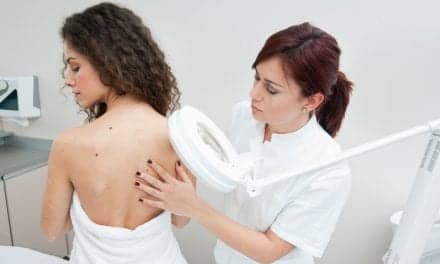 Untreated Sleep Apnea May Be Linked to Melanoma Aggressiveness