You’re so vain; I’ll bet you think this song is about you, don’t you, don’t you.” I hear this Carly Simon song in my head nearly every day when I speak to women OSA patients who are ready to give up on CPAP because of mask complaints. What many of them really have are what I refer to as “vanity issues,” but they don’t realize it.

These repetitive complaints were puzzling and caused me to dig deep and find out the real reasons why so many women struggle with their interface. We know that nearly every person can find a mask that fits their face. Yes, it can be challenging, but it can be done.

According to the National Sleep Foundation, “An estimated 18 million Americans have sleep apnea, including one in four women over 65. While apnea is more common in men, it increases in women after age 50. Because being overweight is a risk factor for sleep apnea, the increase in abdominal fat during menopause may be one reason menopausal women are 3.5 times as likely to get this sleep disorder.”

CAN’T GET NO SATISFACTION

As a sleep professional, your time is valuable. What do you do when you are faced with a patient who is never satisfied with the interfaces you provide? Are they expecting perfection? Is the mask failure simply their excuse to give up? Is your frustration in dealing with complainers simply your excuse to give up on them? What’s really going on here? I believe part of the education process should include evaluating each patient to learn their expectations of the prescribed CPAP therapy. What preconceived notions did they bring with them upon diagnosis? Do they have a friend or family member on CPAP? Did that person have a success or horror story? Hopefully, you have informed your patient that there is an adjustment period that might be challenging. Provide them with the tools they need to achieve success and realistic expectations as well. Determine if your patient has a willing and positive attitude for making CPAP work, or if their attitude is filled with negativity from the beginning. You will know how to plan your strategy to strive for their successful compliance.

My role has never involved CPAP setup. As a sleep advocate and sleep educator, my interaction comes later in the process when trouble arises and patients have reached a level of desperation. When presented with female patients who are frustrated and ready to give up, I have learned to go back to the beginning. I ask a few questions, but let them talk. You learn more by listening. I ask them to relay their experience from the first issue of equipment to the present. I listen as they tell me about all of the masks they have tried and aborted, including why they think each failed. I then ask them to tell me their normal nightly routine when preparing for lights out. When they begin their story with “I get in bed and put on my mask,” I stop them and we have the discussion about doing their final mask fit and adjustment as they lie in bed, in their sleeping position with machine turned on. If they confirm doing this important step, I often find myself scratching my head thinking, “Why is this not working for her, what isn’t she telling me?” Why am I getting so many calls from unhappy women? Is it because more women are being diagnosed with OSA? Are women more likely to expect perfection and instant positive results? Are women just more likely to call for help?

THEN IT DAWNED ON ME

Normally a nasal pillow user, I was trialing a new nasal mask. I knew I had chosen the right size, but I could not get the darned thing to seal no matter what I did. Not one to let any mask get the best of me, I kept trying and trying different adjustments. Exhausted, frustrated, madder than a wet hornet, and just as I was ready to give up and throw the darned mask across the room, the light bulb went off! Like a hypnagogic hallucination, my mind flooded with the faces and voices of the women I had spoken to. I heard their desperate voices, negativity, crying, and frustration; all of the complaints vividly flashed before my eyes.

My OSA was diagnosed at age 35, and nearly 20 years later I have matured in many ways.

Sleep apnea patient turned sleep advocate, evolved to sleep educator and lecturer. Like most women, I want my appearance to be the best it can be at my age of 50 something. A few years ago, I started changing my nighttime facial cleansing routine. I added serums and moisturizers to help with the new fine lines and wrinkles I see when I look in the mirror. I take it very seriously, willing to dedicate the time and costly investment to delay the aging process. Is this vanity? Perhaps, but I believe most women take their appearance seriously. Who doesn’t want to look the best they can?

What does this have to do with CPAP compliance? What was the epiphany? It’s so simple and logical I find it humorous that it never occurred to me before. A nasal mask will not seal well lying on skin that is dripping with serums and moisturizers. While apnea is more common in men, it increases in women after age 50, the same age that most women take note of their aging skin and start serious skin care action. Since I have worn nasal pillows for nearly 15 years, I was not exposed to the slippery slope of a mask cushion’s inability to stay put on a moisturized face.

Now, when speaking to these women, one of the first questions I ask is if they wear nighttime moisturizers. Nearly all respond positively, and then I inform them of how this is most likely responsible for their mask leak problems or the reason why their mask cushions do not last as long as they otherwise should. It’s so logical, they “get it” immediately. You can hear the wheels spinning as they ponder this information: “Do I have to make a choice and give one up? I can’t live without my nighttime moisturizers, and I can’t live without CPAP treatment. Oh no, what am I going to do?” As Carly sings in my head, I suggest they try nasal pillows, which should solve the problem. Silence, and then “Won’t those stretch out my nostrils and push my nose up; I have heard nasal pillows cause ‘pig nose.'” And I respond, “No, dear, they won’t.” … as I run to the mirror to take a look.

Tracy R. Nasca is a contributing writer for Sleep Review. She is a founder and senior vice president of talkaboutsleep.com.

ResMed has launched the Swift™ LT for Her, the first mask specially designed for the 85% of women who feel that, as women, they have special needs in mask choice.

A recent poll of CPAP users conducted independently on the popular patient Web site talkaboutsleep.com found that 90% of women believe manufacturers should be more considerate of women’s needs in mask development. In the poll, 85% of female respondents said they had special needs in mask choice and fit, and more than 70% said they had mask fit problems. Additionally, 30% of poll respondents said their mask headgear pulled their hair or interfered with their hairstyle.

“ResMed strives to create exceptional products that maximize compliance by incorporating customer and patient feedback into product development,” stated Jennifer Baum, product manager for patient interfaces. “We recognized that female sleep apnea patients have unique needs and preferences in mask choice. The Swift LT for Her fulfills the need for a comfortable, high-performance nasal pillows system specially designed for women.”

The Swift LT for Her incorporates the design of the market-leading Swift LT with specialized features for women. With no forehead support and weighing only 2.3 ounces (67 g), the Swift LT for Her seals softly and securely to ensure a comfortable night’s sleep. It also features an adjustable backstrap in a stylish, soft, feminine print and light blue color, which can be worn over or under the hair to accommodate a wide range of hairstyles.

The year 2008 brought a variety of research focused on sleep problems among women. Researchers investigated links between sleep and female biomarkers, menopause, pregnancy, and other factors. Here are some of the findings published last year. 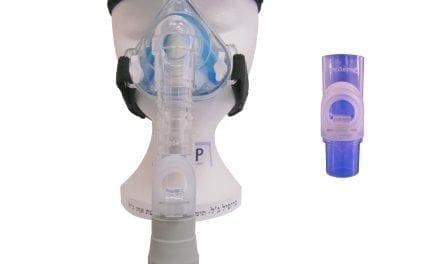