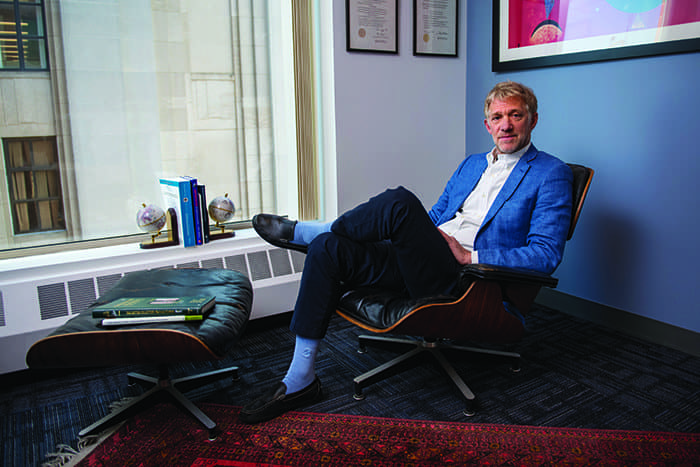 John Winkelman, MD, PhD, was fooled once by an RLS therapy. Now he’s launched a registry to do the long-term research that won’t let the sleep medicine community be fooled twice.

As a clinician scientist, John Winkelman’s research projects have almost always been driven by the perplexing cases he sees in clinic at Massachusetts General Hospital, particularly by patients who live with the neurological sleep disorder restless legs syndrome (RLS).

A professor of psychiatry at Harvard Medical School and a leader in the study of the mechanisms behind the condition, Winkelman, MD, PhD, has made enormous contributions to the medical field over the last few decades. He’s investigated treatment options for patients with kidney failure and RLS. He observed how limb movements during sleep can increase heart rate and blood pressure, which could have cardiovascular implications for people with RLS. Now, in light of studies linking RLS augmentation with dopamine agonist therapy, he is looking at opioid therapies.

Despite published clinical trials showing the efficacy of opioids in treating severe RLS, the national opioid epidemic has made many clinicians wary of prescribing these medications, and patients often report difficulty obtaining opioid prescriptions for RLS, according to a guideline paper published in Mayo Clinic Proceedings in January 2018.1

“A lot of doctors are abrogating their responsibility because they are scared,” says Winkelman, coauthor of the guidelines. “I understand that because I am also nervous about prescribing these medications, but I want to do everything that I can to make sure that my patients’ RLS is safely and effectively managed.”

John Winkelman, MD, PhD, sees patients with restless legs syndrome at Massachusetts General Hospital. He is also a professor of psychiatry at Harvard Medical School and has done extensive research on the mechanisms behind RLS.

David Rye, MD, PhD, a neurologist based in Georgia who treats RLS, has found that some of his patients can benefit from opioids, but writing prescriptions for these medications comes with red tape. Many pharmacies don’t take prescriptions from out of state—and since many people come from far away to see him, prescribing becomes a challenge, he says.

“Some physicians have just decided that they are not going to prescribe [opioids]. Several people in my office refuse to prescribe the medications. It’s not only a burden to the patients, it’s a burden to me because I end up seeing these patients,” he says.

Should sleep medicine doctors prescribe opioids for RLS? It’s a question that Winkelman is organizing a clinical workshop around at the annual SLEEP meeting in June in San Antonio, Texas. There, he hopes that prominent researchers, physicians, and regulators will debate the issue, share ideas, and potentially bridge gaps in understanding.

[sidebar] Continue this discussion in person at SLEEP 2019. The clinical workshop group, entitled “Should Sleep Medicine Providers Prescribe Opioids for RLS?” will take place Tuesday, June 11, 2019, from 8 am to 10 am (room number to be decided; check the program closer to the date). [/sidebar]

The question of RLS and opioids is one that he has already been exploring with funding from the Restless Legs Syndrome Foundation, which in 2017 awarded him a grant for a pilot study. With that funding, he has been building a registry of people in the United States who are prescribed opioids for RLS (registry information is available at www.massgeneral.org/rls-registry). In February, the RLS Foundation announced it is giving Winkelman an additional grant to extend his work in this area.

“This is the first study in which patients with RLS who use opioids are monitored over time to evaluate the effectiveness and tolerability of this treatment long-term, and by far the largest observational study of such patients,” says Karla Dzienkowski, executive director of the foundation, in a statement.

Evaluating this therapy has become more important than ever since dopamine agonists, drugs that had long been considered the gold standard of treatment, are no longer a viable option for many patients. In recent years, it’s come to light that as many as 50% to 70% of patients using these medications develop a severe worsening of symptoms called augmentation within 10 years.2,3 In such cases, RLS symptoms spread to the upper extremities and start earlier and earlier in the day.

Winkelman contributed to some of the first clinical trials showing the efficacy of two medications that were approved by the FDA in the United States for the treatment of RLS in the 2000s: pramipexole and ropinirole, which are dopamine agonists sold under the brand names Mirapex and Requip.

At first, these medications seemed like miracle drugs. “They, at least in the short-term, are incredibly effective for RLS, just like putting a piece of butter on a hot pan. The RLS really melts away in almost everybody,” he says.

The clinical trials for FDA approval were only 3 months long but years later it became apparent in longer treatment that, unfortunately, in many people RLS becomes worse over time on these medications. “It became clear as I was treating these people that we had made a mistake,” says Winkelman. “I began seeing more patients who were on high-dose dopamine agonists and had this very clear and very severe augmentation. So it became a challenge as to how to treat those people.”

Physicians who don’t recognize the phenomenon of augmentation continue to increase the dopamine agonist doses for patients whose symptoms worsen, unknowingly causing potentially permanent damage. “My experience is that some degree of augmentation is reversible, but for many people it is not,” Winkelman says, “so you need to treat what is now the more severe aspects of restless legs syndrome.”

Winkelman joined an international task force, established by the International Restless Legs Syndrome Study Group in conjunction with the European Restless Legs Syndrome Study Group and the RLS Foundation, to develop evidence-based recommendations for the prevention and treatment of dopaminergic-induced augmentation. In 2016 the group published a paper in the journal Sleep Medicine, stating that in the most severe RLS augmentations cases, when all else fails, methadone or oxycodone should be considered.4

“There are only four really well-established treatment categories for RLS. One are the dopamine agonists; the second, alpha-2-delta agents: gabapentin and pregabalin. The third class is [intravenous] iron or oral iron in people who have lowish serum iron, and the fourth is opioids. So we don’t have unlimited options,” says Winkelman.

To bring awareness to this issue, Winkelman has visited Washington, DC several times over the last 6 months to talk to regulators from agencies including the US Department of Health and Human Services and the US Food and Drug Administration.

During these trips, he’s asked the question: “How can we continue to address the significant opioid problem we have in this country, but at the same time recognize that doctors need to know that there are legitimate uses of opioids, such as RLS?”

Low doses of opioids can offer some relief, but Winkelman wants to proceed with caution. More data is needed about the long-term effects of opioids on RLS patients. This is why he developed the National RLS Opioid Registry, based at Massachusetts General Hospital in Boston. The project has grown larger than expected, enrolling roughly 400 participants in the last year, far surpassing the original goal of just 200.

[sidebar] The RLS Registry will remain open to new participants until late June 2019. Enrollment is limited to individuals who have a diagnosis of RLS, are taking an opioid medication to treat their RLS symptoms, and have previously taken or are currently taking a dopamine agonist for RLS treatment. For information about participating, visit www.massgeneral.org/rls-registry or call 617-643-2082 [/sidebar]

In his clinical practice, Winkelman uses the Opioid Risk Tool, a well-established rating scale to help clinicians determine patients’ likelihood of misusing or abusing opiates. The form is available for free online from the National Institutes of Health.5

Winkelman typically prescribes methadone for RLS, a synthetic opioid that is known to treat pain, without producing the same intoxication that natural opiates are known for. According to the Mayo Clinic Proceedings paper, opioid medications most commonly used for RLS are oxycodone and methadone, but tramadol, codeine, morphine, and hydrocodone can also be considered. Effective doses are considerably lower than those used for chronic pain, 10-30 mg daily for oxycodone or 5-20 mg for methadone.1

According to Winkelman, researchers still have more to learn. The National RLS Opioid Registry already has 6 to 12 months of data for about half of those who have enrolled and retention rates have exceeded expectations.

The team has identified physicians who are willing to provide brochures about the registry to their patients. Those who are interested in participating can contact the researchers at Massachusetts General. The registry is enrolling new participants until late June 2019.

“We are going to continue to follow the participants for at least 5 years and hopefully longer,” says Winkelman. “We really need long-term safety and efficacy data to provide to patients, to doctors, and to regulators.”

Participants are given an initial phone interview and an online questionnaire. The researchers then follow up with them every 6 months with surveys online. Data collected pertains to opioid medication, dose, severity of symptoms, opioid side effects, sleep quality, and augmentation.

So far, “Opioids appear to be effective, long-term, without dose escalation, they are well-tolerated, and we use them only in cases in which people developed augmentation and don’t respond to other approaches: iron, gabapentin, pregabalin,” says Winkelman, “so [opioids] are really last-ditch treatments.”

One previous double blind, randomized study in the journal Lancet Neurology found that prolonged release oxycodone-naloxone was effective for short-term treatment in patients with severe restless legs syndrome not controlled with other treatments.6 “The study followed patients for a year, but that is not long enough,” says Winkelman.

“I’ve been through this once with the dopamine agonists, doing what I thought was best for my patients, and what was expert standard of care. But it turned out not to have been a good thing,” he says. “A lot of people did get tremendous relief from the dopamine agonists, but we did not anticipate that in the longer term it would make their RLS worse. So having been through that once, I really feel like it is my responsibility to examine this in more detail just so we do not make the same mistake again.”

The Mayo Clinic paper concludes, “A number of opioid medications in low dose appear effective in refractory RLS. The risks of opioid use are relatively low, taking into account the much lower doses used for RLS compared with those in patients with pain syndromes. As long as reasonable precautions are taken, the risk-benefit ratio is acceptable and opioids should not be unreasonably withheld from such patients.”

Why This Dietitian Is Changing Her View On Supplements

Is It Restless Leg Syndrome or Neuropathy? 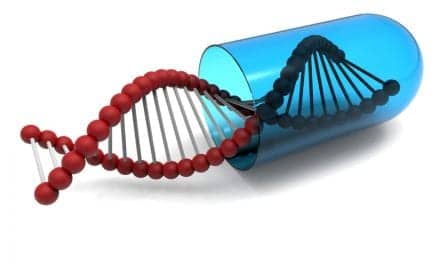