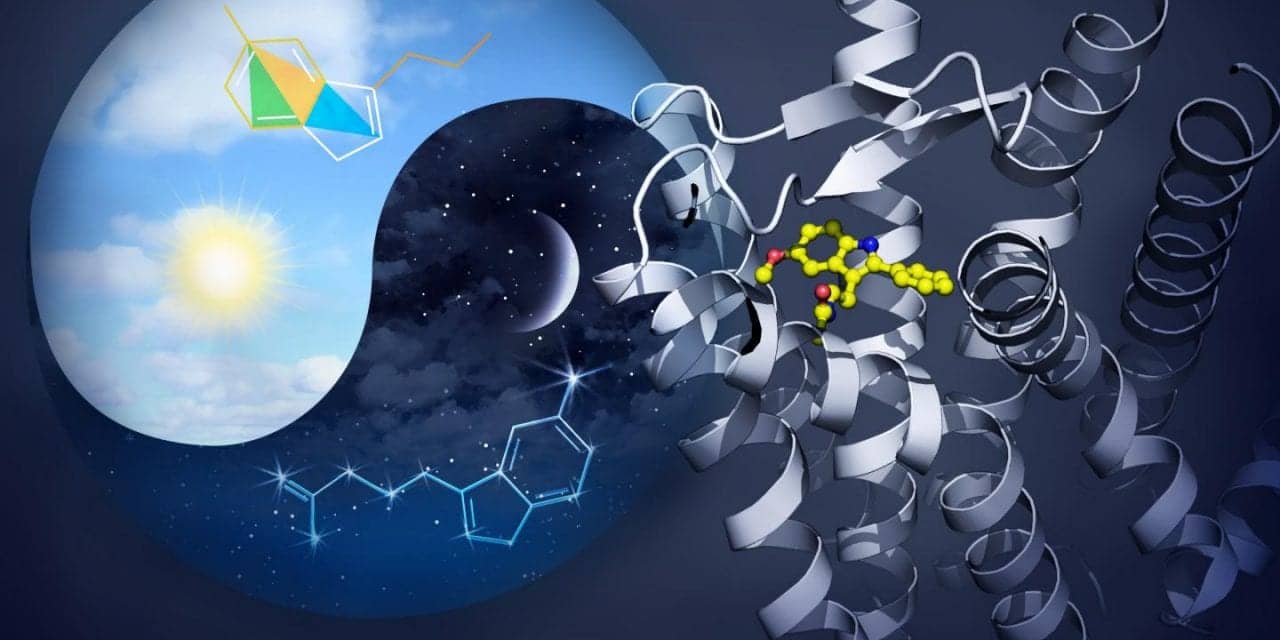 A third of all Americans have difficulty with sleeping, and many of them turn to melatonin supplements to catch some Zs. However, scientists don’t fully understand melatonin’s role in the biological clock, which has made it difficult to develop drugs for sleep disorders without several side effects.

Now, an international team of scientists has shed much-needed light on melatonin’s effects, opening the door to the development of new drugs for sleep disorders—and other health issues affected by melatonin. They developed 3D models of the tiny antennae—called receptors—on the surface of cells that synchronize the body’s internal clock with the day and night cycle.

“Our goal is to provide the structural information to other researchers who can use it for designing new drug compounds or to study mutations of these receptors in patients,” says corresponding author Vadim Cherezov, PhD, a scientist at the Bridge Institute at USC Michelson Center for Convergent Bioscience, in a release.

Creating the 3D maps of the two melatonin receptors, MT1 and MT2, is critical for understanding how the biological clock works. The scientists can use this information to design drug molecules that bind to the melatonin receptors and monitor the potential effects. The benefits could go beyond improving sleep.

“This data will help us design drugs that interact only with these receptors, with the hope we can treat a variety of conditions including diabetes, cancers, and sleep disorders, in a more targeted way,” says Bryan L. Roth, PhD, MD, pharmacology professor at the UNC School of Medicine.

The findings on the melatonin receptors were published in two letters on Wednesday, April 24, in the journal Nature.

Melatonin Comes From the “Soul”

Melatonin is generated in the center of the brain by the pineal gland, once described by the philosopher Descartes as the “soul” of the brain and body.

Humans respond naturally to daylight changes through the pineal gland, near the hypothalamus. As night falls, the gland produces more melatonin, which then binds to the MT1 and MT2 receptors of the cells. Before dawn, the gland decreases melatonin levels, signaling that it’s time to wake.

MT1 and MT2 are among an estimated 800 receptors in the human body. These receptors, known as “G protein-coupled receptors,” (GPCRs) appear on the surface of a cell. The receptors act as a sort of email inbox, relaying information into the cell to set off a cascade of activity.

About a third of all drugs on the market are designed to bind with G protein-coupled receptors. Each receptor has a different role in regulating functions in the body, many of which are critical for basic survival, such as hunger and reproductivity. The bulk of these receptors also have some role in the human olfactory system—taste and smell.

Scientists around the world have obtained structures of less than one-tenth of these receptors so far. MT1 and MT2 are among the latest. The MT1 and MT2 receptors are important for multiple processes, including reproduction and even some cancers.

“By comparing the 3D structures of the MT1 and MT2 receptors, we can better discern the unique, structural differences that distinguish the two receptors from each other—and their roles in the biological clock,” says Wei Liu, PhD, of Arizona State University’s Biodesign Institute. “Armed with this knowledge, it becomes easier to design drug-like molecules that will bind to only one receptor or the other, but not both. This selective binding is important as it will minimize unwanted side-effects.”

The structures of both receptors were obtained using a laser, called the Linac Coherent Light Source (LCLS) at the SLAC National Accelerator Laboratory, which uses X-rays to take stop-action pictures of the receptor atoms and molecules in motion.

“Due to the tiny size of the crystals, it wouldn’t have been possible to make these measurements anywhere other than LCLS,” says co-author Alex Batyuk, a scientist at SLAC National Accelerator Laboratory. “Because of the extreme brightness and short pulse duration of LCLS, we were able to collect hundreds of thousands of images of the crystals to figure out the three-dimensional structure of these receptors.”

The researchers collected hundreds of thousands of images of the scattered X-rays to figure out the three-dimensional structure of these receptors. They also tested effects of dozens of mutations to deepen their understanding of how the receptors work.

In addition to discovering tiny, gatekeeping melatonin channels in the receptors, the researchers were able to map Type 2 diabetes-associated mutations onto the MT2 receptor, for the first time seeing the exact location of these mutations in the receptor.

In these experiments, the researchers only looked at compounds that activate the receptors, known as agonists. To follow up, they hope to map the receptors bound to antagonists, which block the receptors. They also hope to use their techniques to investigate other GPCR receptors in the body.

“As a structural biologist, it was exciting to see the structure of these receptors for the first time and analyze them to understand how these receptors selectively recognize their signaling molecules,” Cherezov says. “We’ve known about them for decades but until now no one could say how they actually look. Now we can analyze them to understand how they recognize specific molecules, which we hope lays the groundwork for better, more effective drugs.”

Image: The sleep-promoting hormone melatonin (shown as a constellation in the night sky) is synthesized from serotonin (shown as a kite) during night time, and both of these archaic molecules predate animal evolution. High melatonin levels at night permit it to establish its sleep-promoting properties by acting through high affinity receptors, depicted in the right side of the image composition. Illustration by Yekaterina Kadyshevskaya, Bridge Institute at USC Michelson Center for Convergent Bioscience.