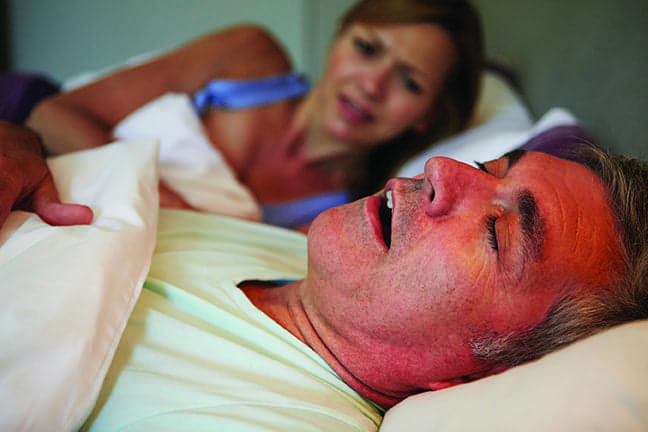 “Simple” snoring can cause complex problems in the lives of those affected by the loud nocturnal breathing. New treatment options may have sleep professionals reevaluating their response to patients with this complaint.

On the occasions when you tell patients who snore that they do not have obstructive sleep apnea (OSA), the resulting feeling can be one of mutual relief. No need for treatment, you may say, call me if other symptoms develop down the road. But for some patients, frustration—not relief—is the dominant emotion. Without a sleep disorder diagnosis, they remain alone in handling the complex problems spurred by their simple snoring—such as their wife sleeping in a different room or not being able to go on a camping trip with friends.

There are longstanding home remedies for simple snoring (also known as primary or benign snoring) that sleep professionals can recommend, such as weight loss, limiting nighttime alcohol intake, and allergen avoidance. Now several manufacturers want to draw more attention to treatment options that they say could change the landscape of how snoring is handled. Indeed, a few say they seek to transform healthcare providers’ mindsets regarding snoring from a general attitude of dismissiveness to one of concern. They point to promising product efficacy studies and the impacts that simple snoring can have on patients’ lives.

“The medical necessity versus the lifestyle reality is something that we believe the physician should pay attention to,” says Michael Gusky, CEO, founder, and chairman of inSleep Health. InSleep Health received FDA 510(k) clearance in 2015 for its Cloud9 Anti-Snoring System and is currently seeking funding to launch the prescription-only low-level CPAP device. “One of the intended consequences of Cloud9 was the fact that a legitimate solution for simple snoring is now available and that it would bring more patients out of the darkness to find out why they snore,” Gusky says via phone interview with Sleep Review.

Australian medical tech start-up Rhinomed hopes to galvanize American couples via its product “Mute,” an over-the-counter in-nose nasal dilator that treats snoring (but not OSA) and debuted in the American market at SLEEP 2015. At the time of its US debut, Michael Johnson, the company’s CEO, said in a press release: “Snoring can destroy relationships and have a negative impact on people’s health. The good news is that using something as simple as Mute can change lives and relationships. American men can reclaim their bedrooms by breathing better and letting their wives and partners get a good night’s sleep.”

To Treat or Not to Treat?

Even if a patient is desperate for a snoring solution, should sleep professionals spend their valuable time prescribing or recommending snoring treatments? Though no medical reimbursement exists for simple snoring solutions, treatment proponents argue the time is well spent because it helps snorers and snorer bed partners markedly improve their sleep and it cultivates relationships with patients who are at higher risk of developing OSA later.

An Omnibus study commissioned by Rhinomed and released in 2015 found that over 45% of both snorers and their partners have mediocre or poor sleep quality whereas 63% of people from non-snoring homes have good or excellent sleep quality. Partners of snorers wake up more often during the night (49% partner versus 31% snorer), feel more tired (46% partner versus 33% snorer), and are unhappier (18% partner versus 12% snorer) than the snorer. Most snorers (43%) say they try not to let snoring bother them but 20% admit to sleeping in a separate bedroom.1

By contrast, a study of 118 couples in which one partner (all men in this trial) snored and the other partner (all women) did not, found that many had good quality, or at least improved, sleep when the snorer used a Mute nasal dilator. The men-snorers reported better breathing, better sleep quality, and less snoring, and the women-partners who said they had been suffering from secondhand snoring before the trial reported that their sleep quality was much better when their partner used Mute. They also confirmed that they heard less snoring with the device. Specifically, 53% of the snorers reported their sleep quality to be “better” or “much better” when using Mute. Seventy-six percent of men reported that Mute helped them snore less, and, of those, 58% said it eliminated their snoring completely. More than 50% reported that none of the other products they had previously tried had worked. Four times as many women reported having “good” or “excellent” sleep quality when their partner used Mute than when he did not treat his snoring.2

Because some people who snore have or will ultimately develop OSA, some argue that encouraging patients to come forward with snoring complaints early will assist with rooting out more cases of undiagnosed OSA, as well as build the relationship with the sleep physician and an expectation of treatment compliance from the beginning. InSleep Health’s Gusky says, “You’re bringing a group of people forward to be treated with low-pressure CPAP and in all likelihood as they age they will require a sleep test. [With Cloud9 treatment for simple snoring], they will have already become accustomed to the idea of PAP therapy.” According to a poster presented at the American Thoracic Society 2015 conference, Cloud 9’s efficacy for simple snoring plateaus at 4 cm H2O,3 so Gusky proposes that being acclimated to this pressure may help later with adherence to the higher levels of pressure typically prescribed to treat OSA.

Similar to OSA treatments, the efficacy of simple snoring treatments depends on where the obstruction occurs. The new treatments target different obstruction causes and locations.

Mute targets nasal obstruction. “Our R&D programs have shown that stenting the nose can deliver a significant improvement in the volume of air that can move through the nose and upper airway. In essence, Mute utilizes Poiseuille’s Law, which states an increases in the diameter of the vessel, in this case, the nostril, will increase the volume of air traveling through the vessel (in this case, the nose) by the power of 4. This means we have the potential to radically increase the volume of air that travels through a patient’s airway,” says Shane Duncan, vice president, global sales and marketing, Rhinomed, in an email interview. Because it is available over-the-counter at pharmacies including Walgreens, Duane Reade, and CVS, Duncan says, “Mute is an easy first step to addressing snoring because it is very comfortable, inexpensive, and less invasive when compared to other solutions.”

Also available over-the-counter, Theravent uses the novel technology of expiratory positive airway pressure (EPAP) to reduce or eliminate snoring (it’s a lower resistance version of the technology first introduced in the prescription OSA treatment Provent). Theravent was FDA cleared in 2012 and also touted at its launch as an impetus for physicians to take simple snoring more seriously. A randomized controlled trial of 49 patients demonstrated that successful users of Theravent averaged a 76% reduction in snoring, and bed partners reported a statistically significant reduction in snoring duration and volume. The study also found that the level of snoring reduction with Theravent was on average about five times that of nasal strips.4

Positional therapies for snoring are not new, but a new generation of devices that use vibration to encourage users to get off their backs may cause more physicians to consider positional therapy because of the new devices’ higher compliance rate. Night Shift is one such prescription-only device available in the United States. Created by Advanced Brain Monitoring, the device was granted FDA 510(k) clearance in 2014 and can be used for positional obstructive sleep apnea and for simple snoring. “In our paper, we showed a significant decrease in the percent time snoring,” says Dan Levendowski, president and co-founder of Advanced Brain Monitoring, in a phone interview. A paper published in the Journal of Clinical Sleep Medicine found that 59% of Night Shift users showed a reduction in snoring.5 Advanced Brain Monitoring does not track how many users have Night Shift for primary snoring versus for positional sleep apnea.

Similar to CPAP in patients with OSA, the low positive airway pressure that will be available through Cloud9 is highly efficacious for simple snoring from all causes. Gusky says, “The effectiveness of low positive airway pressure to treat simple snoring is an absolute solution for those patients who want to eliminate the noise pollution in the bedroom.” The Journal of Clinical Sleep Medicine has accepted a paper on Cloud9 for publication this year.

Whether an individual’s simple snoring is treated is typically determined by the motivation and persistence of the snorer. But new technologies may ultimately provide relief for more snorers who seek a quieter night. 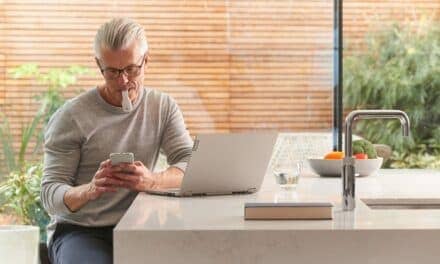 Up and Awake with Down Syndrome