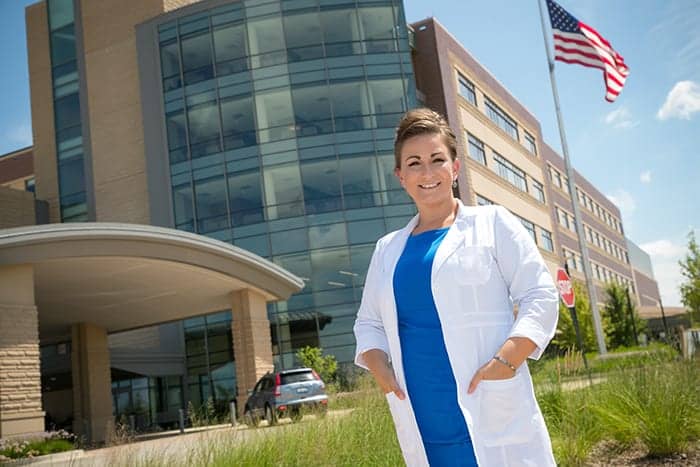 As sleep navigator for two hospital locations, Andrea Ramberg, BA, CCSH, RPSGT, refers high-risk patients for sleep studies before they wind up in the hospital again.

In her work with Illinois-based Centegra Health System, Andrea Ramberg, BA, CCSH, RPSGT, prides herself on asking the right questions at the right time. It’s a talent that has taken her from night technologist to sleep navigator for Centegra’s multi-hospital inpatient sleep screening program.

Similar to a breast health navigator or oncology nurse navigator, sleep navigators guide patients to make informed decisions. In this role, Ramberg combines a healthy respect for the science of sleep with a keen bedside manner that alleviates patient anxieties.

Splitting her time between Centegra hospital locations in McHenry and Huntley, Ramberg sees patients who are flagged after responses from the STOP-Bang questionnaire raise concerns. A recent case involving a woman in her 50s illustrates Ramberg’s willingness to dig deeper.

The woman had uncontrolled high blood pressure and type 2 diabetes, and physicians admitted her to the hospital for chest pains. Add in new onset atrial fibrillation and doctors agreed that a face-to-face screening with Ramberg was warranted.

“I went into the room and immediately saw how anxious she was,” says Ramberg, who this year earned a bachelor’s degree in psychology. “This was only her third hospitalization, and her comorbid conditions had not caused complications. I noted by her bedside that she had cute little drawings probably done by a grandchild.”

The observation sparked communication, and the conversation helped the patient to begin the process of really listening—instead of simply nodding reflexively. Ramberg introduced the idea that some of the symptoms could be caused by the quality of sleep. The physician had asked, “Do you snore?” but little else at that point.

Ramberg says, “By the end of the visit, she was so grateful. She gave me a hug and said nobody had ever taken the time to dig deeper. If [patients] are tired, particularly women, they assume it’s because they are taking care of everyone else in their life. They believe they are excessively fatigued because women are often the caregivers.”

The encounter took about 40 minutes. Ramberg contends that the time can often pay dividends in the form of reduced hospital readmissions. It’s a contention backed by statistical analysis.1-2

The woman eventually took an in-lab sleep study, and she did indeed have severe sleep apnea. She is now compliant on CPAP and is “thrilled” with it. “She was blown away that nobody else had discovered her sleep apnea,” Ramberg says. “She could not believe that a hospital visit was able to bring such positivity into her life.” 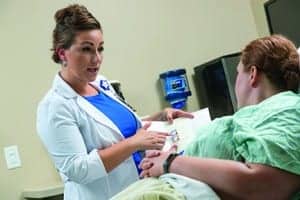 Ramberg combines the science of sleep with a relatable bedside manner.

Similar testimonials have flowed in since Ramberg began her position as sleep navigator 3 years ago, a role that followed 7 years in a variety of clinical sleep capacities. Part of the inpatient sleep screening program’s success is due to a concrete set of steps that bring high-risk patients into a room with Ramberg.

Referrals come to each respiratory department after the STOP-Bang questionnaire—asked to every patient upon admission—yields four or more positive responses. From there, Ramberg triages by reviewing health histories. “When I am assessing patients, I use a document I created in the electronic medical record [EMR] that satisfies insurance’s face-to-face requirements and documentation, and also serves as the prescription,” Ramberg explains. “The physician working with the patient then co-signs the document, and it also acts as the prescription, with specification on follow-up.” She then schedules either the overnight polysomnography or home sleep testing, as appropriate.

Between the two hospitals, it adds up to 250 to 300 referrals per month. Ramberg prioritizes in-person visits with patients who have comorbid conditions possibly linked to undiagnosed sleep apnea. Some patients are deprioritized because they are not good candidates for a sleep study, for example, if they are hospitalized with a terminal illness. Regarding the remaining patients, she says, “We are currently working on the protocol for those I do not screen face to face that alerts the patient they were flagged to be at higher risk for sleep apnea and to discuss it with their primary care physician or a sleep medicine specialist.”

Insurance companies require certain aspects to be documented to approve sleep studies. Before Ramberg’s inpatient sleep screening program, some physicians would write prescriptions for sleep studies but not document the steps as required. In response, insurance companies would kick the prescription back. “If that happened, some patients would have the sleep study, but they would be stuck with the bill,” Ramberg says. “Or things would be denied when they got set up with their CPAP units. I was able to make sure that certain items were documented with every single patient, no matter what. It makes the physician’s job easier.”

Ramberg created her screening assessment as a way to get patients’ sleep studies scheduled faster. Many physicians did not know what to cover on a face-to-face assessment, which led to delays. “I was scheduling patients for a consult post-discharge with our sleep physician, but patients would not show up for it, or it would end up being two months past discharge before finally getting in for a sleep study,” Ramberg says. “That is too long. We needed to get these patients in sooner than later if we were going to prevent that readmission.” 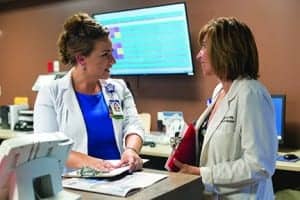 Ramberg interfaces with a multidisciplinary team of hospital staff.

Patients could not be scheduled right away because the face-to-face consult was not taking place in a timely manner or was not appropriately documented. Ramberg looked into Medicare guidelines and created the screening form partially based on those strictures. The assessment form “has a free form box that I type in all my notes,” she says. “Whenever I speak with a patient, I include anything I think will help the physician or technologist with the sleep study. Underneath I have any type of sleep study I could order and who the follow-up will be done with, because that’s also something that insurance requires.

It adds up to a smooth workflow, particularly if the right person is at the helm. “Andrea is very passionate about what she does,” says Rebecca Rockwood, MT (ASCP), MHA, director of operations for Laboratory, Respiratory and Neurology, at Centegra. “She is focused on our patients and how sleep is an integral part in a person’s well-being. She is very personable and discusses the process that patients go through from scheduling, through working with DME [durable medical equipment companies]. She is patient and persistent with patients because she genuinely believes that completing a sleep study can make a positive change in a person’s life.”

Benjamin J. Nager, MD, medical director, Sleep Center and Neurology, Centegra Health System, says, “Andrea is a highly intelligent, goal-directed, and motivated person who had the foresight and courage to pursue an idea that she thought would help patients, reduce overall complications, and improve outcomes.”

A philosophical transition may still need to happen if Ramberg’s model is to be replicated successfully. “People often think of sleep as something you can and should handle after the fact,” she says. “They see it as disposable in a sense that it’s not as important as other things. I think the inpatient sleep screening model is showing that it is as important. Yes, we must treat patients right now for why they are in the hospital, but we need to make sure we are offering the best care plan possible. Teaching patients how untreated sleep apnea could potentially be causing atrial fibrillation, congestive heart failure, and fluid retention is vital.”

Extra education for staff members is one way to get buy-in, but Ramberg acknowledges that pushback is inevitable from techs who have already completed a significant chunk of learning. “There is a need for our field to increase their educational base, and the educator role helps us to evolve to the next level,” says Ramberg, who earned her CCSH credential and bachelor’s degree in what she says was one small step at a time, all while raising a son and daughter. “I think techs can get frustrated at times hearing they need to increase their education base when they have already met the requirements to work in a field they love. However, my mission while I’m working on the program committee with the AAST [American Association of Sleep Technologists] and on the Board of Directors with the BRPT [Board of Registered Polysomnographic Technologists] is to show how higher education will help them take care of patients in the very best way possible.”

Ramberg entered the sleep field with an associate’s degree and took classes one at a time, with yearlong breaks at times, and recently earned her bachelor’s degree. One of her instructors for the bachelor’s program, Glenn Gelman, PsyD, says, “Columbia College courses are 8 weeks long and intensive; they cover an entire semester of material in half the traditional time. To do well, students must work hard. To excel, students must possess a high degree of personal initiative, self-discipline, and determination.” Ramberg’s determination got her to graduation with magna cum laude honors and she believes other techs can do the same.

Learning the full breadth of sleep treatments is also important, Ramberg says, and it demands a willingness to embrace oral appliances, surgical alternatives, or whatever new technologies may come along. Prior to starting at Centegra, Ramberg knew the DME side and how to download data from machines to gauge compliance. “We also brought in a dentist,” she says. “He saw patients alongside our sleep medicine physician. It [oral appliances] worked well for mild to moderate patients who could not tolerate CPAP.”

In addition to her reliance on science and questionnaires, Ramberg’s old-school willingness to listen is her “secret weapon.” “Personally, I like the touch of looking a patient in the eye,” she says. “I jot down notes on a clipboard, while always trying to engage. If a patient sees you are not looking, they may not tell you as much. I usually sit, instead of staying standing, because it puts patients at ease a little more.

“This job is part sales. I sell to patients the concept of their own health. We all should focus on finding the right motivation to keep patients compliant and get them to want to invest in their own health….Obviously, sleep is not going away. We all need to evolve with the science and figure out how we fit in. As long as sleep techs keep their minds open, they will be fine, and patients will benefit.” 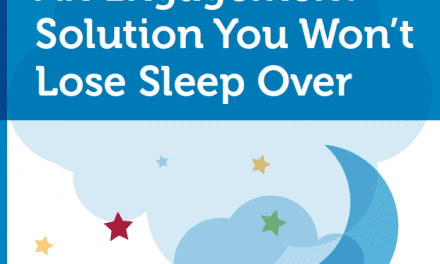 An Engagement Solution You Won’t Lose Sleep Over