Surgical removal of the tonsils and adenoids in children suffering from sleep apnea is associated with decreased asthma severity, according to a large study of the connection, published in the journal PLOS Medicine.

Researchers from the University of Chicago found that in the first year after the operation, children who had the surgery had a 30% reduction in acute asthma exacerbations and a 38% decrease in acute status asthmaticus—a medical emergency.

“Several small studies have described a strong association between obstructive sleep apnea and asthma, two common inflammatory conditions that impair breathing in children. But we wanted to test the strength of the connection when studied in a much larger population,” says the study’s lead author, Rakesh Bhattacharjee, MD, assistant professor of pediatrics at the University of Chicago, in a release. “Our study adds weight to the growing sense that obstructive sleep apnea aggravates asthma and further tips the balance toward early identification of obstructive sleep apnea. This will help physicians advocate for surgical intervention, not just to eradicate sleep-disordered breathing, but also to reduce asthma severity and decrease reliance on medications in asthmatic children.”

Asthma is a common and costly respiratory disease. It is the third most prevalent chronic pediatric disease in the United States, affecting an estimated 7.1 million children under the age of 18, according to the Centers for Disease Control and Prevention. It is also the third most common cause of hospitalization of US children under age 15. In 2009, more than 770,000 pediatric emergency room visits were related to asthma. The direct healthcare costs of childhood asthma exceed $50 billion a year, according to a 2011 study.

Obstructive sleep apnea also is common, affecting an estimated 2% to 3% of all children. It involves inflammation of the tonsils and adenoids. This swelling narrows a child’s upper airway, which episodically collapses at night. Surgical adenotonsillectomy—removal of the adenoids and tonsils—is the standard therapy.

The study involved data on more than 40,000 children between the ages of 3 and 17, obtained from Truven Health’s MarketScan databases. It included 13,506 US children with asthma who underwent removal of their adenoids and tonsils as treatment for obstructive sleep apnea. The researchers compared their asthma symptoms from the year before surgery to the year afterwards.

They also compared those results to 27,012 children with asthma—carefully matched in a 2:1 ratio for age, sex, and location–who retained their tonsils and adenoids.

The incidence of secondary asthma outcomes, such as acute bronchospasm and wheezing, decreased significantly for those who had surgery but was unchanged for those who did not. Prescription refills followed the same pattern.

The authors note several concerns about their data. The MarketScan database includes only patients with private insurance, not those with government coverage or no health insurance. Nor is it clear from the available data why patients underwent adenotonsillectomy, although the vast majority of such procedures are performed for sleep apnea.

The journal’s editors, in a brief summary, note that adenotonsillectomy is associated with some risks, but note that the study’s findings “suggest that the detection and treatment of adenotonsillar hypertrophy may help to improve asthma control in children.”

The study was supported by the National Institutes of Health and the American Heart Association. Additional authors were Beatrix Choi, David Gozal, and Babak Mokhlesi, all of the University of Chicago Medicine. 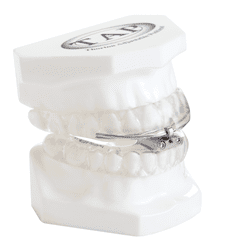 Programming Your Worker for A Good Night’s Sleep