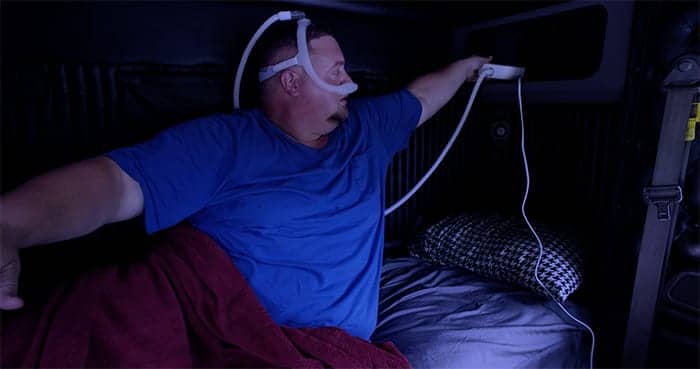 More than a decade ago, truck driver Bob Stanton regularly had trouble starting his truck in the morning after running his CPAP machine off of the vehicle’s batteries overnight, but now he runs his ResMed AirSense 10 off a diesel auxiliary power unit (APU), essentially a small engine attached to the side of his truck, and it works just fine.

“Part of the reasonable accommodations my employer makes for sleep apnea is keeping me assigned to a truck that has an APU,” Stanton says.

He no longer has a problem keeping his CPAP powered through the night, but this is a change from when he was first diagnosed and his former employer didn’t want to make the $10,000 investment to install an APU. That was more than 10 years ago and times have changed, Stanton says.

Over the years, there has been an increase of awareness among fleet managers and truck manufacturers of the need to prioritize the health and safety of drivers, who often have to balance the competing electrical demands of their medical devices with those of all the household appliances that keep them comfortable. In 2008, Congress amended the Americans With Disabilities Act (ADA), which, among other changes, led to more protection and accommodations for truck drivers with sleep apnea.

“I think that driver retention and comfort is paramount for fleet managers and an inverter is a very big part of it. I definitely think that there is more awareness now, and fleet managers are active in ensuring that they are able to create a great work environment for drivers,” says Chandrani.

These changes not only increase the comfort of truck drivers, they also ensure that the roads are safer for everyone since drivers with untreated sleep apnea could be a public safety threat. According to one study, published in the journal Sleep in 2016, the rate of serious, preventable crashes was 5 times higher among truck drivers with sleep apnea who failed to adhere to PAP therapy, compared with controls. On the other hand, drivers with sleep apnea who were fully or partially compliant with treatment had crash rates statistically similar to controls.1

“It is critical for transportation companies to implement comprehensive sleep apnea screening and treatment programs to ensure that truck drivers stay awake at the wheel,” former president of the American Academy of Sleep Medicine Nathaniel Watson, MD, who was not involved in the study, said in a release.

Sleep apnea is not uncommon in the general population, but the percentage of truck drivers with the condition is even higher. A study, sponsored by the Federal Motor Carrier Safety Administration and the American Trucking Associations, found that 28% of commercial truck drivers have mild to severe sleep apnea.2

To deal with this issue, fleet companies have started instituting sleep apnea screening programs. The company SleepSafe Drivers partners with 15 fleets across the country to screen for and treat sleep apnea, says Adrian Knight, senior vice president of operations.

The American Trucking Associations, the largest national trade association for the trucking industry, developed a task force to give fleet managers advice on how to power in-cab medical devices, including CPAP machines.

“Since CPAPs are a device that are actually used quite frequently in the industry by drivers, we need to make sure that they are properly powered,” says Jack Legler, technical director of the American Trucking Associations technology & maintenance council.

“A good night’s sleep is important for long-haul operators and an APU can be a valuable asset to ensure driver comfort and reliable performance of in-cab devices, including CPAP devices,” says Rubly.

The APUs also power air conditioning and humidifiers in the sleeper cab without the need to idle the truck’s engine. This provides driver comfort during rest periods and also helps to save fuel and comply with anti-idling regulations in many states.

Medical technology companies are also taking the initiative to design travel CPAP machines that can easily be taken on the road.

“The number-one thing is that it is small and compact. It is a lot easier to pack,” says truck driver Matt Neese, who uses the DreamStation Go. “It leaves room for more stuff I can put in my suitcase or my truck.”

Both the AirMini and the DreamStation Go can sync wirelessly with smartphones to record compliance data that can then be forwarded to a physician. This saves a lot of time for drivers, who are often far from home, unable to make a quick visit to their provider to drop off paperwork.

“I can email it to my physician before I even get there. That way I don’t have to take a whole day running around,” says Neese.

“It allows my treating physician to tweak my pressure remotely, so I don’t have to go see them to adjust the pressure,” he says.

The CPAP data is especially important to this population since the U.S. Department of Transportation’s Federal Motor Carrier Safety Administration suggests that in order to operate a commercial vehicle safely, drivers with sleep apnea should use PAP therapy at least 4 hours per night on at least 70% of nights.3

“I have to prove to them that I am using the CPAP,” says Neese. “It is obviously a really big deal with truck drivers.” 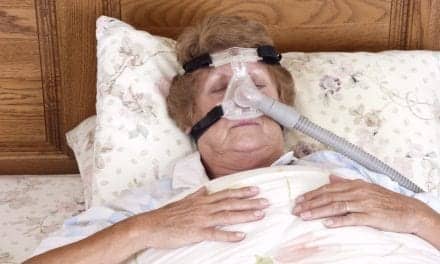 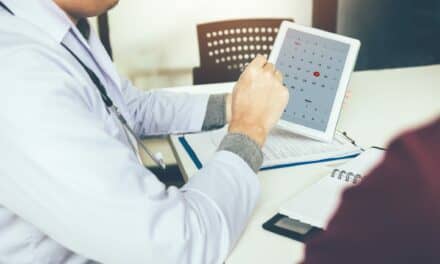 Years In, Neurostimulation for Sleep Apnea Keeps AHI Down