An early and late stage case of Alzheimer’s disease show that patients’ quality of life can be improved by providing accurate polysomnograms and medication.

Alzheimer’s disease (AD) makes up the largest proportion of cases of irreversible progressive dementia. Age-related cognitive deficits, disruptive alterations in sleep-wake patterns, and loss of brain nerve cells and morphology tend to be more severe in dementia patients. They are usually the reasons why patients can no longer be cared for at home. Then they are admitted to nursing homes or hospice care units.

AD patients may also suffer from sleep disorders, which commonly occur in this age group. Sleep apnea, periodic limb movements disorder, and REM behavior disorder reportedly have not been found more frequently in this group, but they do occur. They may be difficult to recognize since they are not the dominant features of AD. They need to be treated.

Langa and coworkers1 recently reported the prevalence of mixed dementia. AD and dementia due to vascular changes may coexist. When it occurred, the term “mixed dementia” was used. The authors predicted that the coexistence of AD and vascular dementia (mixed dementia) is likely to increase as the population ages.

The classical brain lesions of AD are amyloid plaques outside the nerve cell and neurofibrillary tangles inside the cell; however, recent autopsies have often found that vascular changes were quite severe along with these classical changes of the brain in AD, confirming the frequent coexistence of the two conditions.

Sleep disorders in AD have been extensively reviewed by Bliwise.2 As the disease progresses, sleep is more disturbed. Two illustrative patient medical histories and sleep laboratory findings are presented.

Case 1
A 63-year-old man was referred from the neurology clinic with the history of hypertension, possible transient ischemic attack, cataract surgery, and recent memory loss. For several months, he had become forgetful and neglected to pay his bills. He was not able to drive to the airport, although he had frequently traveled in the past. His snoring was loud, and there was witnessed sleep apnea. He retired to bed around 9:30 pm and typically fell asleep within approximately 24 minutes. He occasionally took 0.5 mg of clonazepam at bedtime to facilitate sleep. Several members of the family reported his snoring. He denied orthopnea or other symptoms suggesting other parasomnias.

He typically awoke at around 3:00 am to go to the restroom. He fell back to sleep without any problems. He often did not remember his dreams. Upon wakening and getting out of bed between 7:30 and 8:00 am, he did not feel as refreshed as he thought he should.

He denied morning headaches or dyspepsia, and occasionally had an acid taste in his mouth, but this was not typical. During the daytime, he reported a component of excessive sleepiness and sedentary hypersomnia. He was able to perform his occupation without difficulty although he felt fatigued frequently, which had been progressive.

The memory loss bothered him a lot. Sometimes he would drive his car out without closing the garage door and would occasionally forget to shave. He denied any disturbing factors to his sleep other than what was mentioned above.

The family’s major concern at this point was possible sleep-disordered breathing. He did have occasional nasal stuffiness for which he took no medication. He reported a mild depression; however, he did not believe this was the major factor contributing to his fatigue. For his depression, he took 20 mg of citalopram in the morning, which apparently had not disturbed his sleep in any noticeable way.

Unremarkable Family History
His medical history revealed mild hypertension and mild depression. He did not smoke or drink alcohol, but did drink caffeinated beverages occasionally. He denied the use of recreational drugs.

Physical Examination
He was a healthy-appearing male in no apparent distress. He weighed 160 pounds and was 68 inches tall. His blood pressure was 150/100. His head and his organs were negative for abnormalities. His neck was subtle and had no glandular enlargement. His lungs were clear, and there was no cardiac arrhythmia and no limitation of joint movements. Also, his neurological examination was completely normal.

Due to the loud snoring and excessive daytime sleepiness, a nocturnal polysomnogram was ordered as well as CPAP titration to follow.

The study protocol included an all-night polysomnogram, which was recorded in our sleep laboratory. An infrared video system was employed to monitor behavior during sleep, and the patient was placed in a sound-attenuated room. All data obtained were compared and validated with control data.

The technical quality of the study was good with the sleep efficiency of 67.4%. In the morning, the patient felt that the sleep was about the same as it was at home.

Sleep latency was 9 minutes, total sleep time was 281 minutes, REM latency was 239.5 minutes, and arousal index was 26.9/hr. The efficiency index was 67.4% and only one REM period was obtained.

The patient snored excessively loud, but periodic limb movement and other parasomnias were not noticed. There were, however, frequent spontaneous wakings. An ECG showed no evidence of significant cardiac dysrhythmias.

Respiratory abnormalities were almost totally abolished. The RDI was 0.7/hr. The RDI during REM sleep was 9.2/hr. The mean saturation was 94.7% with a saturation nadir to 90%. The snoring was completely abolished. There was no periodic limb movement disorder nor were there any other parasomnias. ECG showed no evidence of significant cardiac arrhythmias.

In conclusion, the patient did have significant OSA with improvement after nasal CPAP with 8 cm of H2O. The patient was followed in the sleep clinic and showed gradual improvement of sleep and daytime energy; however, the patient continues to have progressive memory loss at 6-month follow-up.

Case 2
A 68-year-old male retired college professor had a 3-year history of slowly progressive dementia of the Alzheimer’s type. As his mental deterioration progressed, he would sleep less than 3 to 4 hours every night. He became aggressive and violent during the daytime, and at night, he paced and wandered around the house. When his wife could no longer manage him at home, she placed him in a long-term care facility.

In the medical unit, he slept for only 4 hours at most during the night and he paced the hallways; he developed frightening dreams frequently. During the day, he would sit alone in a chair without communicating or interacting with other people.

He needed assistance with dressing, grooming, and bathing, but he was able to feed himself and walk independently. There was no history of past alcoholism; however, there was a family history of AD. He did have a mild case of late onset diabetes mellitus, in which he was non-insulin dependent. Results of his physical examination and neurological evaluation were otherwise unremarkable and did not indicate the presence of other neurological disease such as Parkinson’s disease.

An overnight polysomnography was performed. The total recording time was 358.5 minutes. The total sleep time was 198.5 minutes (approximately 3.3 hours). The sleep latency was 8 minutes, and the REM latency was 310 minutes. The patient achieved a sleep efficiency index of 55% and a sleep efficiency measure of 13%. During the total sleep time, the patient spent 44.6% time in stage wake, 42.4% in stage I, and 9% in stage II (normal 56.9%). There was total curtailment in stage III, IV sleep. REM sleep was markedly reduced down to 4% (normal 23.5%). The patient’s sleep was frequently interrupted by waking throughout the night. There was no significant clinical hypopnea or apnea. Periodic limb movement was minimum, and there were five total movements during his all-night sleep. This polysomnogram would be compatible with that of a patient with dementia with frequent disruption of sleep architecture and numerous awakenings during the night. There was excessive stage wake and stage I, and marked reduction in stage II, stage III, IV, and stage REM. The patient was given an atypical antipsychotic and showed some improvement clinically and in his sleep.

Clinically, the patient has daytime neurological disturbances. As the disease progresses, he may become aggressive and agitated, and experience severe loss of memory.

Approximately 15 years ago, controlled studies were done on AD patients and controls with the same age range.2 As the disease progressed, the sleep-wake pattern deteriorated. There was a severe decline in the percentage time spent in stage III and stage IV sleep. REM sleep was also reduced in late stage; however, it was not significantly changed from control levels in early stages of AD. The sleep architecture was severely fragmented in AD patients, and the intrusion of wake time into the normal sleep time not only shortened sleep time, but increasingly fragmented sleep. There was prominent fragmentation of the normal circadian sleep-wake rhythm in AD patients with frequent daytime naps and prolonged periods of nighttime wakefulness.

The intrusion of wakefulness into sleep time and increased daytime napping compared with healthy age-matched controls suggest a disruption of circadian sleep-wake rhythm in excess of that seen in normal aging. Early study did not show increased incidence of OSA and/or nocturnal myoclonus in AD patients when compared with age-matched controls. The loss of stage III and IV sleep and an increased amount of frequency of nighttime wakefulness occur during the very early stage of the AD process. These abnormalities increase in magnitude with increasing severity of the AD process. REM sleep was affected later in AD patients along with more severe sleep-wake circadian rhythm changes. Interestingly, early studies showed that in female AD patients, there seemed to be a much greater likelihood of having significant OSA. In the sleep center, we may want to caution the patient’s family that they might expect some sleep-wake pattern changes early during the disease course.

The management and treatment of AD include general supportive treatment of the patient and the caretakers.3,4 Some of the medications can slow the progression of loss of memory and cognitive function. Cholinesterase-inhibitor drugs have been reportedly effective in this regard. Common representatives of that class of medications may include donepezil, galantamine, and rivastigmine. There are also medications to reduce hallucinations, depression, social withdrawal, and suicidal ideations. Paranoia, accusatory behavior, and delusions can be controlled with medication as well. Atypical antipsychotics including risperidone may reduce wandering and disruptive nocturnal behavior, and consolidate sleep wake patterns.

It has been said that restless nights lead to listless days. There are ways of manipulating the circadian rhythm by exposure of the patient to bright lights, by increasing daytime activity, and by the use of medications. The administration of melatonin has been reportedly successful in some measures. In-home monitoring by actigraphy may show reduction of movements during nighttime with use of the above treatments.

Drug treatment for anxiety and awakening by hypnotics and antihistaminics has been helpful. Zolpidem has been used for insomnia and night wandering with some success.

Unconfirmed treatment with methylphenidate has been reported with improvement of sleep and behavior in patients with AD.5 In the sleep laboratory, we have to be aware of the probable modification of sleep pattern by pharmaceutical agents. Although AD currently has no cure, a lot of help can be provided to improve the quality of life of patients and family members. 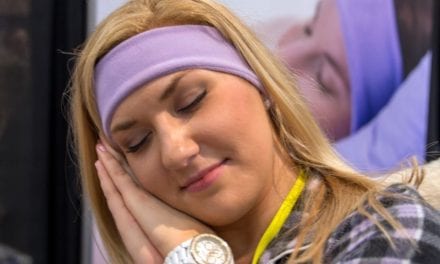