New research that was presented at the 20th Anniversary Meeting of the American Academy of Dental Sleep Medicine (AADSM) in Minneapolis quantified the efficacy of mandibular advancement splints (MAS) using a self-administered, at-home device to monitor snoring and sleep-disordered breathing.

The current study used the Sonomat, a portable, unobtrusive device that has sensors contained within a mattress overlay. These sensors measure apnea hypopnea index (AHI) by detecting and recording snoring, breathing, and body movements.

There was also a decrease in the percentage of patients who snored from 38% without the MAS to 15% with the MAS. Snoring decreased overall, but 12 of the 42 subjects still snored for greater than 25% of the night, with several having substantial increases in snoring.

"The primary findings in our study were that MAS devices were effective in the treatment of OSA by reducing AHI in moderate and severe OSA patients," said principal investigator and lead author Joachim Ngiam, BDS. "Overall, significant reductions in snoring were found to occur with MAS therapy with greater changes seen in OSA patients."

The study involved data from 42 men and women over two consecutive nights. The subjects slept the first night without the MAS and the second night with the MAS advanced to 70% of maximum jaw protrusion.

Despite favorable reductions in AHI with MAS treatment, snoring may persist and patients may question treatment success, indicating a need for quantification of therapy efficacy.

"Although significant reductions in AHI and snoring were observed, residual snoring may persist or even increase in some patients," said Ngiam. "A significant proportion of patients, 29%, still snored greater than 25% of total sleep time, with several having substantial increases despite MAS therapy." 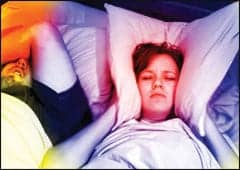