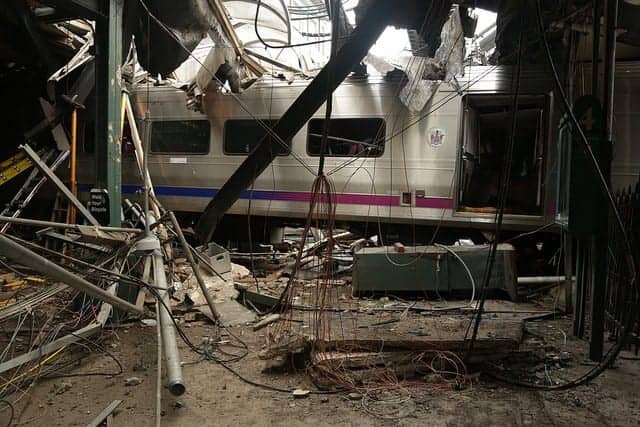 The Sept 29, 2016, accident on the New Jersey Transit railroad at Hoboken, NJ, killed one person, injured 110, and resulted in major damage to the station. The Jan 4, 2017, accident on the Long Island Rail Road at the Atlantic Terminal in Brooklyn, NY, injured 108 people. Both accidents involved trains that struck end-of-track bumping posts and crashed into stations.

The NTSB found the two accidents had “almost identical” probable causes and safety issues. The board also determined that these safety issues were not unique to these two properties, but exist throughout the country at many intercity passenger and commuter passenger train terminals.

In a statement issued in August 2017 the NTSB expressed its “disappointment” with the withdrawal of a Notice of Proposed Rule Making by the Federal Railroad Administration and the Federal Motor Carrier Safety Administration stating, “Obstructive sleep apnea has been in the probable cause of 10 highway and rail accidents investigated by the NTSB in the past 17 years…Medical fitness and fatigue, two of the NTSB’s 10 Most Wanted List of Transportation Safety Improvements for 2017 – 2018, are tied to obstructive sleep apnea.”

“The traveling public deserves alert operators,” says NTSB chairman Robert L. Sumwalt, in a release. “That is not too much to ask.”

In addition to recommending safety-sensitive personnel be screened for obstructive sleep apnea, the board recommended the use of technology, such as positive train control, in terminal stations and improving the effectiveness of system safety program plans to improve terminal operations. The NTSB made two recommendations to New Jersey Transit and the Metropolitan Transportation Authority (the parent company of the Long Island Rail Road) and two to the Federal Railroad Administration.

“Today’s new recommendations, if acted upon, have the potential to eliminate end-of-track collisions,’’ Sumwalt says. “That translates to protection for passengers on trains, and for people standing on terminal platforms.”

The complete accident report will be available in several weeks. The findings, probable cause, safety recommendations, Sumwalt’s prepared remarks and PowerPoint presentations used in Tuesday’s board meeting are all available at https://go.usa.gov/xnscj.