CPAP can increase alertness and improve quality of life for sufferers of obstructive sleep apnea (OSA), even if their symptoms are minimal, according to a study conducted by researchers in Europe. Patients enrolled in the study reported an improvement in daytime sleepiness within 6 months of beginning CPAP treatment.

"Treatment with CPAP clearly reduces daytime sleepiness and improves quality of life in patients with very limited symptoms, at a rate of about half the improvement seen in patients with more severe symptoms," said Sonya Craig, research fellow at Churchill Hospital, Oxford, England.

Researchers analyzed data from 341 patients from 10 medical centers, with proven OSA but insufficient current symptoms, as judged by both the patient and the sleep physician, to justify CPAP therapy. Patients were randomized to receive either 6 months of CPAP or no treatment. The Epworth Sleepiness Score was used to determine the change in daytime sleepiness measured at the start of the study, and again at follow-up 6 months later. Wakefulness and sleepiness were also measured using the Oxford Sleep Resistance Test (OSLER), and quality of life was assessed using a standard questionnaire.

The researchers found that after 6 months of treatment, CPAP significantly reduced daytime sleepiness and increased wakefulness compared to the standard treatment group. They also found that the odds of falling asleep during the OSLER test, which requires patients to lie quietly and react to a flashing light for prolonged periods of time at repeated intervals, were 49% lower in the CPAP treatment group compared to those in the standard care group. Quality of life scores were also significantly higher in the CPAP group compared to standard care patients. Ironically, about 25% of patients stopped treatment prior to the end of the study, reporting that they did not perceive adequate benefit.

The study was presented at the ATS 2011 International Conference in Denver. 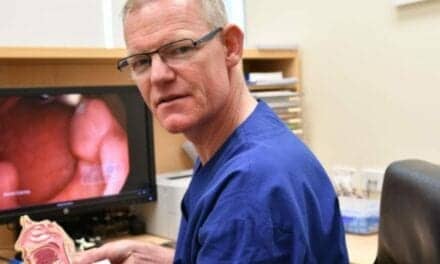 Partial Tonsil Removal May Have Better Outcomes Than Full Tonsillectomy