Wake Up Narcolepsy to Go the Distance in 2014 Boston Marathon 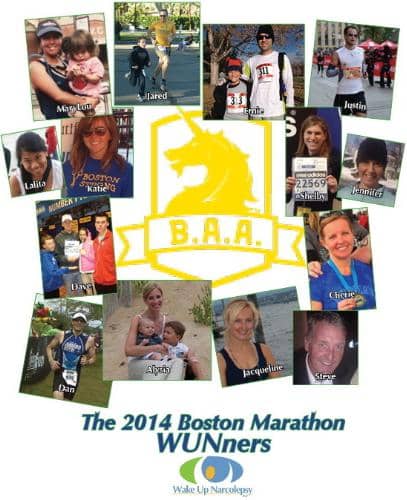 Wake Up Narcolepsy (WUN) will be represented by 14 dedicated individuals from across the United States and Canada in the 118th Boston Marathon. WUN is a nonprofit organization working to speed narcolepsy diagnosis and treatment and fund medical research to find a cure.

Dave Gow, of Worcester, Mass, who cofounded WUN in 2008, is running his second Boston Marathon in support of Thomas, his 16-year-old son who has narcolepsy. Halted by race officials a mile from the finish line, along with thousands of other runners in last year’s tragic race, Gow renewed his commitment to finish this year’s race for people with narcolepsy everywhere.

“Hockey, not long-distance running, is my first sport, so training for and running a marathon is a stretch for me,” he says in a release. “But I’d do anything for my children. Everyday I watch Thomas struggle to overcome his narcolepsy. Running a marathon pales in comparison to the challenges he faces living with this invisible disease. If my efforts help kids like Thomas lead more normal lives, it’s all worth it.” In the 2013 race, Gow was among the top 20 fund-raisers of all marathon runners, bringing in over $38,000 to benefit WUN’s work.

To date, WUN has raised about 70% of its fund-raising goal of $100,000 for the 2014 marathon. All proceeds will support researchers in the United States and Canada working diligently to find a cure for narcolepsy. Donations can be made at www.crowdrise.com/wunners2014bostonmarathon.

Thankfully, none of the nine WUNners who started the 2013 race was injured from the terrorist bombs near the finish line, which claimed three lives and injured hundreds. One of them, however—Sager—witnessed both blasts as she sprinted toward the finish line. Thrown into shock, she required help from first responders before leaving the scene under her own power. She is among those featured in If Not for the Perfect Stranger, which chronicles stories from that horrific day.

“This year will be a very special race for runners, spectators, fund-raisers, and the city of Boston itself,” Sager says.