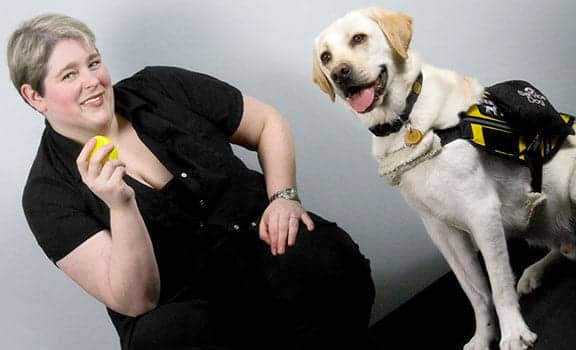 In the Morgan Junction neighborhood of West Seattle, Wash, Service Dog Academy breeds hope for narcolepsy patients. It is one of several programs throughout the United States that train narcolepsy alert and narcolepsy response canines.

While the public is more aware of other types of medical alert dogs, such as those that warn diabetics of low blood sugar, narcolepsy service dogs play no less crucial a role to their human counterparts.

Mary McNeight, CPDT-KA, CCS, BGS, Service Dog Academy director of training and behavior, began working with narcolepsy service dogs in 2010. “I had a friend in high school who was diagnosed with narcolepsy. I reconnected with her on Facebook in 2010, a year after I started doing diabetic alert dog training. Several of my diabetic alert dog students were reporting that their dogs were alerting to not only their blood sugar levels but also things like charley horses and atrial fibrillation,” McNeight says. “I put up a notice on my website talking about how I was inspired to see if a dog could really alert a narcoleptic and within a month I had a student who was willing to be my guinea pig.” 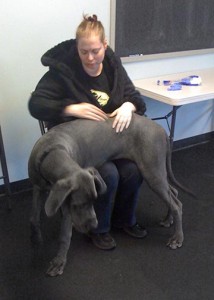 A Service Dog Academy-trained narcolepsy service dog places himself over a student during an attack to prevent her from falling off a chair.

The dogs can provide up to a 5-minute warning of an impending sleep attack, McNeight says. That gives the patient the chance to sit or lie down, get to a safe location, call a friend, and take other precautions to minimize harm. During an attack, the dog can be taught to place himself in front of the patient so the patient can drape their body over the dog, versus falling onto a hard surface. These dogs can also be taught to stand over the person as a crime deterrent or to find help (in the form of human assistance or by dialing 911 from a doggie phone). After the person regains movement control, the dog can provide balance and support in getting off the ground and can fetch medication. (Speaking of medication, service dogs can also use their internal clocks to remind a patient to take his medication at a specific time, including waking the person up in the middle of the night for a dose.)

McNeight says she thinks the dogs are picking up a scent emitted from the narcolepsy patients. “It’s a biochemical change in the body. We do not know what the particular odor smells like due to the difference between human scent perception and dog scent perception,” she says. “Dogs have 250 million scent receptors in their noses, we have only 5 million.”

In the paper “Narcolepsy and Odor: Preliminary Report,” Luis Dominguez-Ortega, MD, PhD, also arrives at the conclusion that narcoleptic patients have a distinct typical odor that trained dogs can detect. His study did not look at whether dogs can predict cataplexy episodes; rather, it looked at whether dogs could tell the difference between healthy controls and narcolepsy patients simply by smelling their sweat. The answer seems to be yes, as 11 of 12 narcolepsy patients were detected positive by the dogs while only 3 of 22 controls got the same response.

“It has been very exciting to see that dogs confirmed our initial observation, helping us to continue searching for the possible profile of volatile organic compounds (VOC) in narcoleptic patients,” says Dominguez-Ortega, who works in the Sleep Disorders Unit at Clinica Ruber Catedra de Medicina del Sueño CTO-CEU at the Universidad San Pablo CEU in Madrid, Spain. “Smell is the primal sense that allows most organisms to detect predators, food, mate, and so to perpetuate the species. The dogs can detect the smallest quantity of substances with very different forms, molecular sizes, and molecules with very small stereoisomeric differences. Chromatography studies conducted so far seem to confirm that patients with narcolepsy give off a specific VOC profile.” 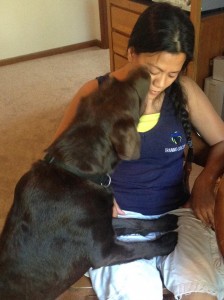 At PAWS Training Centers’ four locations, most patients who request narcolepsy dog services do so via self-referral that starts with an Internet search, says David Burry, PAWS managing director. PAWS trains a wide array of medical alert dogs, physical/neurological disability service dogs, and psychiatric/psychological service dogs. Burry says 6% of the service dogs PAWS trains are trained for narcolepsy response. “As people become more aware of what dogs can be trained to do, they are more interested in the possibilities. We receive about 30 inquiries a week up from about 5 or 6 inquiries a week about a year ago,” he says.

PAWS begins socializing its puppies at 3 days of age, working up to more than 40 commands learned in their dogs’ first 8 weeks. Scent training is usually introduced at 1 year of age. Ideally, a dog is ready to work with a narcoleptic patient when the dog is between 14 and 18 months old.

To find a dog that is a good match for a narcolepsy patient, Burry says the trainers look for “a dog with a high ‘play’ drive that is always ready and attentive to their handler, not a dog too high energy, but one that is at all times alert and ready to go. We also look for a match between the dog’s energy level with their handler as well as personality similarities (analytical, driver, amiable, expressive, etc).”

As awareness increases of what narcolepsy service dogs can do, more and more patients with this life-changing sleep disorder may reap the benefits of an additional support system, in the form of an alert furry companion. 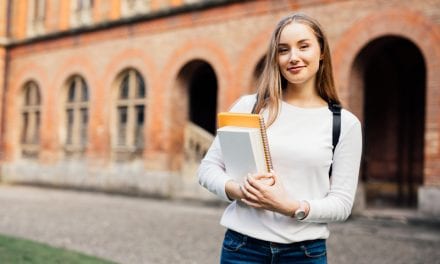 5 Tips for People with Narcolepsy to Succeed in College [Podcast]