Laryngomalacia may be a cause of OSA-like symptoms when CPAP treatment fails because of difficulty breathing during physical exertion, shortness of breath when talking, and stridor.

Continuous positive airway pressure (CPAP) is the most effective treatment for obstructive sleep apnea (OSA). In this disorder, the upper airway collapses and blocks airflow during sleep. The collapse can occur at various points. At the upper oropharyngeal level, the soft palate can be drawn downward into the throat during sleep and block the airway. At the lower oropharyngeal level, the base of the tongue can fall back into the airway. At the hypopharyngeal level (beneath the base of the tongue), weak pharyngeal muscles cannot withstand inspiratory pressure, which allows them to be drawn inward and block the airway. CPAP treatment counteracts this collapse by blowing pressurized air through a nose mask to keep the airway open. When the source of upper airway obstruction is the epiglottis, however, the very treatment used to prevent obstruction can actually cause it.

The epiglottis is a cartilaginous flap at the top of the larynx just above the glottis—the opening into the larynx. It is normally in an upright position to allow passage of air. In people with laryngomalacia, the epiglottis does not maintain this upright position during inspiration but instead falls backward and covers the glottis, thereby blocking airflow. During CPAP treatment in such people, the positive pressure forces the epiglottis backward over the glottis, making it difficult for the person to inhale.

Laryngomalacia, which means “weak larynx” in Greek, is most commonly seen in infants and children up to 2 years old. When laryngomalacia occurs in adults, it can be the result of changes that occur in the epiglottis with aging, but it is often secondary to other problems such as head or neck surgery, radiation treatment for cancer in the head or neck area, and neurological disorders such as strokes.

Surgery Options
Since most children no longer suffer symptoms by the time they are 2 years old, a physician may try to wait for a child to outgrow the condition if symptoms are mild. Surgery is performed if symptoms are severe enough to be life-threatening or if symptoms give a poor quality to life. Since adults do not have the ability to outgrow laryngomalacia, surgery is often the only treatment that will relieve their symptoms.

Surgery is considered when a child has difficulty eating because he can not breathe well or is failing to thrive because of this difficulty, a child has cyanosis (blue-tinged skin) or has a chronically low blood oxygen saturation (below 92%), or when people are excessively sleepy because their sleep is frequently interrupted by apneic episodes. If laryngomalacia is untreated for a long time, a child can potentially develop cor pulmonale (right-sided heart failure resulting from chronic hypoxia). Advances in surgery have made cor pulmonale a rare consequence of laryngomalacia.

In the past, a tracheostomy—a surgical opening in the trachea created through the front of the neck—provided the only relief for symptoms. Currently, there are three basic surgeries that avoid tracheotomy by targeting the epiglottis and its supporting structures; they include epiglottidectomy, epiglottopexy, and epiglottoplasty.

Epiglottidectomy involves trimming excess issue from the epiglottis so that it will not cover the glottis during inspiration. This technique was first described by Samuel Iglauer in 1922.1 He had an infant patient with severe cyanosis and apnea. In an effort to provide relief, he trimmed away part of the child’s epiglottis, which immediately decreased symptoms.

Epiglottoplasty was first described by Lane et al in 1984.3 This surgery reshapes the hypopharynx by trimming away excessive tissue from the arytenoid cartilages, arytenoid folds, and lateral edges of the epiglottis. In 1985, Seid3 performed a simpler but effective epiglottoplasty by cutting the aryepiglottic folds. Cutting the aryepiglottic folds lengthens the distance between the epiglottis and arytenoid cartilages. When this distance is too short, inspiratory pressure forces the epiglottis to curl in on itself and block airflow.

Another epiglottic problem that can obstruct the airway is a bifid epiglottis (an epiglottis that is split in two). In this condition, airflow is obstructed by two flaps fluttering across the glottis. A bifid epiglottis is a very rare condition; approximately 11 cases have been reported in medical literature.4

An adult with undiagnosed laryngomalacia may go to a physician complaining of symptoms that sound like OSA such as choking episodes during sleep. Based on symptoms, the person may be misdiagnosed as having OSA and prescribed a CPAP machine. If people with undiagnosed laryngomalacia are being monitored by polysomnography while on CPAP therapy, they may appear to be having apneas while awake. This is because the epiglottis is pushed back over the glottis and covers the airway. Their oxygen saturation may drop since there is no airflow. They may complain of sensations of being choked or suffocated with the CPAP mask on.

When CPAP treatment fails because of the problems listed in Table 1, laryngomalacia may need to be suspected as a cause of OSA-like symptoms. Laryngomalacia can be verified by a laryngoscope (an instrument takes an internal view of the larynx) or by video fluoroscopy, which takes a moving x-ray picture of the larynx as a person breathes. 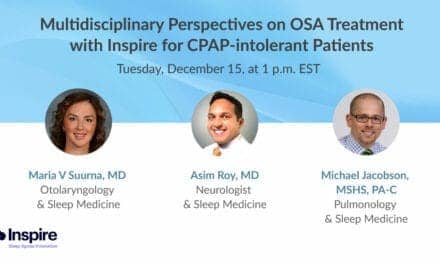