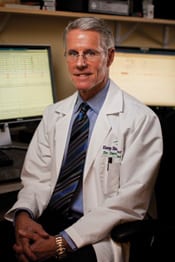 When David White, MD, began the research portion of his pulmonary fellowship training, he decided to work in the area of ventilatory control. This system works beautifully when people are awake and keeps the oxygen and carbon dioxide levels in the blood within very precise boundaries. White and colleague Neil Douglas, MD, discovered in the late 1970s and early 1980s that this ventilatory control system did not work nearly as well when people are sleeping, particularly during REM sleep. This fascinated White and drove him to want to better understand breathing during sleep, a goal he has continued to pursue during his entire career.

This pursuit has led White to serve in such roles as director of the Sleep Disorders Program at Brigham and Women’s Hospital, Boston; chief medical officer for Philips Respironics; and American Academy of Sleep Medicine past president. He was also chair of the Advisory Board to the National Center on Sleep Disorders Research at the National Institutes of Health. Currently, White serves as a professor of sleep medicine at Harvard Medical School and senior physician, Division of Sleep Medicine, Department of Medicine, at Brigham and Women’s Hospital. He also was recently appointed chief scientific officer of Apnicure Inc.

As White’s career has evolved, so has the understanding of breathing during sleep. Currently, thanks to White’s research and that of his colleague Andrew Wellman, MD, phenotyping sleep apnea patients is now possible in the research setting. White hopes that understanding the cause of apnea in each patient will ultimately allow sleep medicine professionals to personalize therapy for sleep apnea.

Sleep Review spoke with White about the concept of personalized therapy for sleep apnea, how it works, and what the future holds for this new approach to diagnosing and treating sleep apnea patients.

Sleep Review: You recently delivered a presentation titled “Personalized Therapy for Obstructive Sleep Apnea: Understanding the Individual Pathophysiology.” What do you mean by personalized therapy?

David White, MD: The basic concept of personalized therapy for OSA indicates that each person will be treated with a therapy specifically designed to address the cause of their sleep apnea. My research colleagues and I strongly believe that people develop obstructive sleep apnea for quite different reasons, and if sleep medicine professionals can understand why each person develops this disorder, then the therapy can be focused on that particular physiology or pathology rather than treating everyone the same. This could potentially open up more therapeutic options than is now the case.

Sleep Review: What physiologic variables should be considered with regard to personalized therapy to treat upper airway obstruction during sleep?

White: We believe there are at least four physiologic variables that dictate whether a given individual develops obstructive sleep apnea. They are:

Sleep Review: If a sleep physician knew the relative contribution of each of these processes in a particular patient, could they target some of these upstream mechanisms? 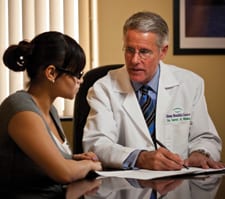 White: We certainly believe that knowing the contribution of each of these traits to the pathophysiology of OSA in a particular individual can drive therapeutic decisions, although we are just beginning to try to prove this. I will provide a few examples. If a patient’s upper airway anatomy is quite severely abnormal, no therapy but CPAP or possible bimaxillary advancement will work. On the other hand, if the anatomy is only mildly abnormal, the other traits come into play. If the loop gain is high, both oxygen and acetazolamide can substantially reduce loop gain. If the upper airway response is good, but the arousal threshold is low, hypnotics such as trazodone, eszopiclone, or sodium oxybate can increase the arousal threshold. A further important point is that therapies can be combined. Anatomy might be improved surgically or with a dental appliance, but this does not completely solve the problem. However, adding an agent to lower loop gain or increase arousal threshold may yield a better result. Thus, phenotyping can drive therapeutic decisions.

Sleep Review: Can these pathogenic factors be measured by sleep professionals?

White: All of these traits can be measured, but currently only in the research setting. This requires a device that can control mask pressure between approximately -10 and +20 cm H2O. The patient is placed initially on a holding pressure (the pressure required to prevent any upper airway obstruction) and this pressure is dropped to subtherapeutic levels repetitively during the night. This challenges the airway itself (anatomy), the upper airway muscles (upper airway response), sleep state stability (arousal threshold), and finally the ventilator control system (loop gain). Thus, all of the traits can be quantified in a single night in the research laboratory.

Of note, Andrew Wellman from our laboratory also has developed a graphic model that incorporates all of the traits outlined above and can easily be examined to understand why a given patient has OSA. The model only has two axes, ventilation (y axis) and ventilatory drive (x axis), yet clearly depicts how the traits interact to yield OSA or no disordered breathing. By looking at the model, it is also easy to understand which traits should be addressed to eliminate apnea in a given patient. Thus, both the measurement of the traits and the use of this graphic model are required to meaningfully understand the pathophysiology of OSA in a given patient and to determine optimal therapies. However, this remains a research procedure as we have not yet proven that the manipulation of traits based on model predictions will reduce or eliminate apnea.

Sleep Review: Is technology available that can help sleep medicine professionals measure parameters for delivering personalized therapy? How might advancements in technology help to better determine a personalized treatment approach?

White: Currently, there is no method clinically available to define these traits, and we do not have strong clinical evidence that manipulating the traits yields the desired results. Thus, it may be somewhat premature to begin treating patients in this manner. That being said, Philips Respironics is developing a device that can, using CPAP drops, determine all of the traits in a totally automated fashion including real-time sleep staging to ensure that the CPAP drops occur at the correct time. The graphic model described above will be incorporated into this device as well. In addition, researchers in our lab are actively assessing the effects of various drugs/devices on the traits of interest and how their manipulation influences apnea severity. Thus, the technology development and clinical research are under way to quickly evolve this approach into a viable method for apnea therapy.

Sleep Review: What is the benefit of personalized therapy over CPAP?

White: CPAP can generally eliminate apnea in any patient who is willing to use it. However, past history has taught us that only about 40% to 50% of patients will use CPAP consistently over long periods of time, and many of these patients would prefer other options if available. Thus, this “personalized” approach will, we hope, give patients who cannot tolerate CPAP meaningful alternatives and good CPAP users other possible options.

Sleep Review: What percentage of patients could be treated using this approach?

White: At this point, we don’t really know the answer to this question. To meaningfully treat patients in this manner, we need to know exactly how much each of the traits can be influenced by the manipulations previously explained and whether the model accurately predicts the individual response to such manipulations. However, studies are under way to answer these questions.

Sleep Review: What do you hope the future holds for personalized therapy for OSA? What role do you hope to play in the development of this approach?

White: It is my hope that the phenotyping of apnea patients will allow us to better understand both the pathophysiology of sleep apnea in general and the cause of sleep apnea in each individual patient. This  should open up a host of new therapies for these patients, only a few of which are under consideration at this time. We desperately need new and better therapies for OSA, and this approach provides a rational, physiologic way to go about designing such treatments. I hope to stay involved both technically and clinically in the evolution of this approach.

Franklin A. Holman is editor of Sleep Review. He can be reached at sleepeditor@allied360.com. 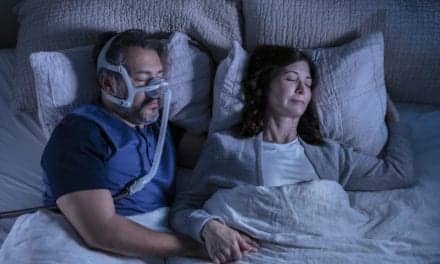