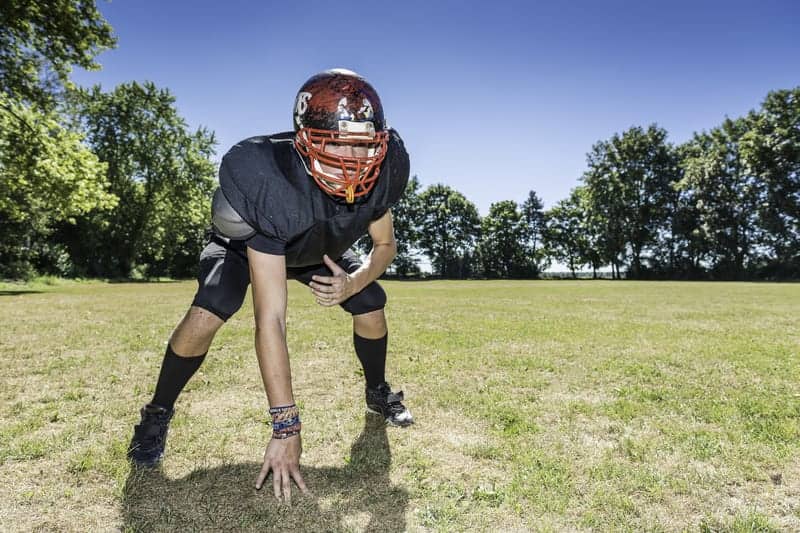 Because of the findings and subsequent news coverage regarding concussions and brain damage in football, we have all become aware that playing the game may involve more than living with painful injuries—it may involve incurring other life-threatening health problems that develop in later life.

But head injuries are not the only serious risk involved in playing the sport. Studies with professional football players have also shown that sleep apnea is also common in professional players, and in linemen in particular.

Now, a study with college-age linemen suggests that the roots of this health problem in football players may begin much earlier, and at an age when the condition is less likely to occur in the general population. While it is not yet possible to identify the cause of the increased risk, a comparison study with other competitive athletes of the same age implies a relationship between physical conditioning specific to football linemen and the health threat.

The study, “Examination of Risk for Sleep Disordered Breathing among College Football Players” is forthcoming in the Journal of Sport Rehabilitation. The authors are exercise physiologists Bailey Beck, PhD, and Joseph S. Marino, PhD, sleep psychologists Hannah Peach, PhD, and Jane Gaultney, PHD, and biologist Timothy Renzi, all from the University of North Carolina at Charlotte.

Though the sleep apnea risks found in college-age linemen are not as dramatic as those found in previous studies with older players, the findings imply higher future risks and point to the need to fully assess the potential consequences of college training, particularly for linemen who quit conditioning after college when they do not pursue careers as profession football players.

“At the professional level there have been two studies—one for retired football players and one for current—that showed they were at greater risk for sleep-disorder breathing,” Gaultney says in a release. “We wondered if that tendency was also visible at the college level, because college is, in some sense, a window of opportunity when you can educate people on health risks.””

Since it would be unexpected to find evidence of any significant occurrence of sleep-disordered breathing in a college-age sample, the study was designed to target the likeliest candidates to detect early signals of the condition. Co-author Marino says, “The population of pro football players that was at greatest risk were the linemen. That was why we targeted the college linemen for this particular study.”

For a comparison population, the researchers picked track athletes—specifically runners—because their sport tends to demand a lean body-type which would contrast with the standard bulk of the linemen, but with equivalent levels of physical exertion, training, and athleticism.

The researchers’ reasoning for the study design is that the most common reason for sleep-disordered breathing in older people is fairly well understood and relates to neck structure.

“Among adults, the collapsing airway is a common cause of sleep apnea, but it’s increasing among children as children become more obese,” Gaultney says. “Generally, among children it is tonsils and adenoids—the tonsils get enlarged and restrict the airway. It’s not a condition that only occurs in older adults or in children with infections though—even a younger adult who has that massive neck can have it.”

Marino agrees, “There is solid correlational data that compares neck circumference and sleep apnea. We found when we compared our linemen that there were significantly larger necks compared with our leaner control group and that seemed to pair up well with our data.”

The study compared data from the two test groups acquired through the use of the Multivariable Apnea Prediction survey, a self-report tool used to screen symptoms of obstructive sleep apnea (OSA), as well as physiological measures that have been associated with OSA (such as neck circumference, tonsil size, and a measure of the amount of clear space between the base of the tongue and the roof of the mouth). While the results did not show a high likelihood of the presence of current sleep-disordered breathing in the college-age football linemen, both self-report and physiological measures suggested significantly greater risk for the disorder in the football players when compared to the track athletes.

“What was interesting about the data from the football players is that even at the college level—these are young healthy people—you wouldn’t expect them to have health problems,” Gaultney says. “Football linemen are athletes and they are working out all the time—and yet the working out that they are doing, the body configuration that they are building, may simultaneously be increasing their risk for sleep-disorder breathing. It’s not a fat issue—there is not much body fat in their case; it’s mainly bulk.”

Marino says, “But linemen pretty much check all the boxes for greater risk. The linemen carry more body fat when compared to players of other positions. Indeed based on the overall size of the athlete, linemen carry a high percentage of lean mass, but I think the real discerning factor is the fat mass that is associated with being a lineman and where they tend to carry it—around the neck and the torso—I think the combination of the athlete’s mass in these anatomical locations all lead to an increase in risk.”

Though no studies have been done on the risks for sleep-disordered breathing in college football players after college, the researchers stress that there is a potential problem in life post-play that may increase the lifetime risk to college-only players.

“Screening them through this system can help, we think. We have put together a combination of survey and non-invasive methods to help catch those who are at risk and can make them aware that, later in life, if they don’t make changes, this is a possible outcome,” Marino says.

Gaultney stresses that the suspicion that a health intervention might be needed was, in part, what spurred the study.

“You can alert people that if they continue on this path, the likelihood is they are going to graduate and they are not going to be as active as when involved in their collegiate sport, leading to an increase in fat accumulation,” Gaultney says. “That can mean that they are already on the path to sleep-disordered breathing, even if they don’t have it now. If people understand this, they can modify their outcomes—they can change and be healthier.”