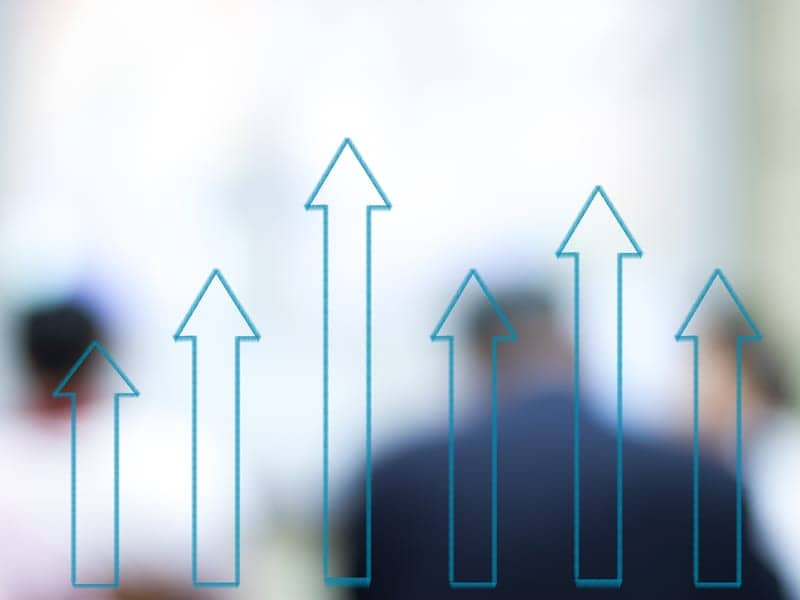 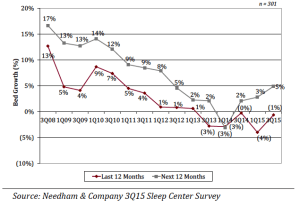 Over the last 12 months (LTM), average beds per respondent decreased slightly by 0.6% to 7.4 beds. But over the next 12 months (NTM), average beds per respondent are expected to increase by 4.9% from 7.4 beds to 7.8 beds. We note that 5% of respondents indicated that they have fewer beds now than they did 12 months ago. Compared to our prior survey (1Q15), the LTM bed growth rate moderated from a 4.0% decline while the NTM bed growth rate improved from 2.8% growth. 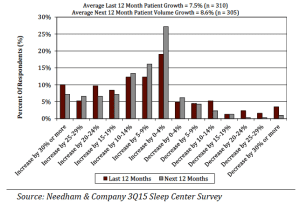 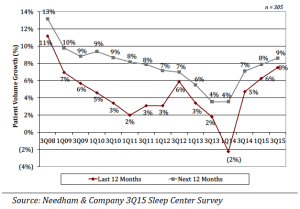 HST Use Continues to Increase 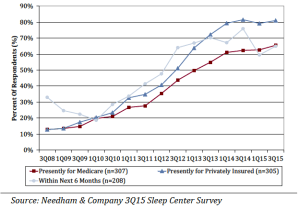 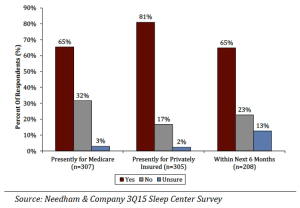 Does Your Sleep Center Administer Home
Tests? (click to enlarge)

The results of the survey show that on average 20% of OSA tests are done with HST rather than in-lab tests. This is up from 17% reported in our prior survey (1Q15). Over time, we expect this to continue to grow.

Currently, 81% of sleep centers offer HST for patients with commercial insurance compared to 65% that offer home testing for patients with Medicare. The portion of sleep centers offering HST has risen rapidly in recent years but appears to have leveled off in our past few surveys. Despite this, we still believe that HST is growing rapidly since we believe that the centers with HST are seeing their mix shift to the home and away from their centers.

APAP Use Increased, Bi-Level Use Stable 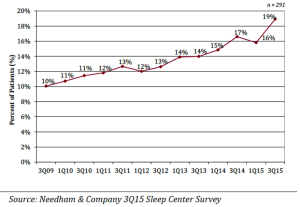 What Percentage of Your Sleep Patients
Use an Auto-Setting Flow Generator? Time Series (click to enlarge) 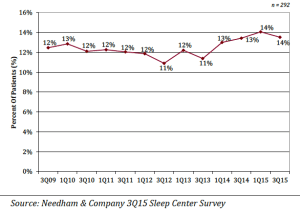 What Percentage of Your Sleep Patients
Use a Bi-Level Flow Generator? Time
Series (click to enlarge)

Respondents use adaptive servo-ventilation (ASV) for 63% of their complex sleep apnea patients. This is down from 76% in our prior survey, possibly due to the SERVE-HF trial results even though the trial evaluated patients with heart failure and central sleep apnea, not complex sleep apnea. The ASV flow generator segment is important in our view because, while unit volumes are low, the products have very high prices and margins.

On average, 5.7% of patients start their obstructive sleep apnea treatment with an oral appliance. This compares to 4.9% in our 1Q15 survey. We specified that these are patients who have never tried a CPAP device. 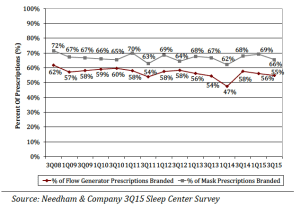 Around 14% of respondents indicated that they have been asked to make changes to branded prescriptions by HMEs due to competitive bidding. This represents a slight decrease from 15% in our prior survey. On average, respondents indicated that 13% of the HMEs to which they refer patients have asked for changes to branded prescriptions. This is a decrease from 17% in our prior survey. 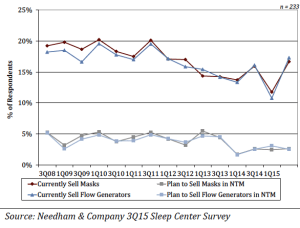 In our recent survey, 17% of sleep centers report selling CPAP equipment, up from 12% in our prior survey. Roughly 3% expect to start selling in the next 12 months.

Over time, the portion of sleep centers selling CPAP equipment has been gradually declining.

Sleep Review and Needham & Company conducted a survey of US sleep centers. The survey received 327 responses between July 22, 2015 and August 10, 2015. Sleep center directors/supervisors/managers (35% of respondents) and registered polysomnographic technologists (34% of respondents) were the most common types of respondents. Every US geographic region and 47 different US states were represented, with the Midwest (29% of respondents) most heavily represented.

Mike Matson, CFA, is senior research analyst at Needham & Company LLC. He is an expert on the medical technologies and diagnostics sector. 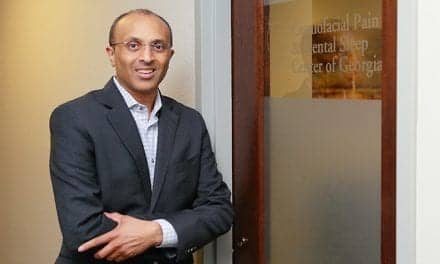 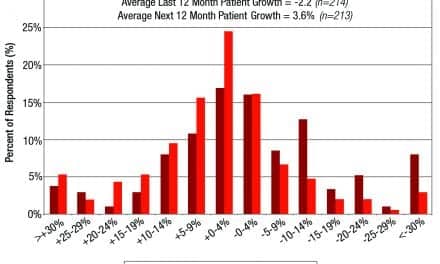 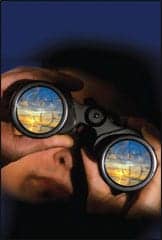 The Cost of Sleep: How Shifts in the Healthcare Landscape Are Causing Patients to Lose Sleep