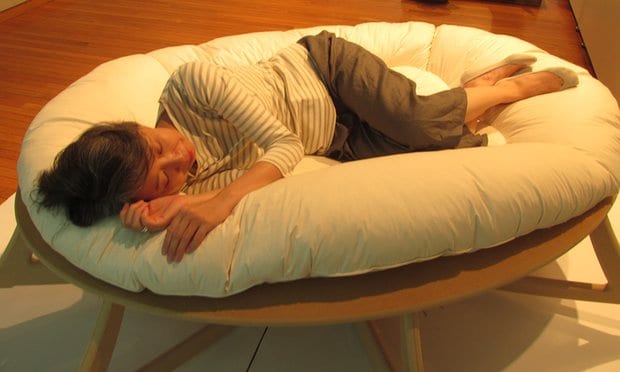 The “humankind evolution bed” based on the sleeping place of chimpanzees and developed by a research fellow is on display at the Kyoto University Museum in Japan.

After he woke feeling unusually rested and refreshed among the treetops of an east African forest, Koichiro Zamma was convinced he had ended the seemingly elusive quest for the perfect sleep.

There were no memory foam pillows or mattresses, just a simple bed of cool leaves held together by a wickerwork of twigs, and built not by humans but by chimpanzees.

Two decades on from his eureka moment, Zamma, a research fellow at the graduate school of Asian and African area studies at Kyoto University, believes chimpanzees hold the key to the ultimate comfy bed.

His “humankind evolution bed”, which is on display as part of an exhibition on sleep at Kyoto University Museum until this weekend, is deceptively simple in its design.

The mattress features a depression in the centre to replicate the natural dip in a chimp’s treetop bed and has a raised periphery for the head, legs and arms. It is supported by a frame made from woven paper string for maximum breathability, and eight curved legs that are designed to allow the bed to rock almost imperceptibly.

Cities That Never Sleep Are Shaped by Sunrise and Sunset