Imbrium Therapeutics LP, a clinical-stage biopharmaceutical company and operating subsidiary of Purdue Pharma LP, is advancing its small molecule IMB-115 (previously referred to as IT-1315) to a phase 2 clinical study following favorable results from phase 1 studies evaluating the molecule’s safety and tolerability, including its potential for abuse and interaction with alcohol. IMB-115 is an internally discovered compound with a novel mechanism of action in clinical development for the treatment of insomnia disorders, including insomnia associated with alcohol cessation (IAAC). This phase 2 study evaluating proof-of-concept for the molecule in patients with IAAC has been initiated and will begin patient enrollment in July.

“Given the substantial medical need in insomnia associated with alcohol cessation, we believe that treatment of the disorder would benefit greatly from the availability of novel, differentiated treatment modalities,” says Paul Medeiros, president of Imbrium Therapeutics, in a release. “Results from the recent IMB-115 alcohol interaction and abuse potential safety studies, along with our earlier efficacy findings, suggest that continued advancement of this molecule is warranted. We look forward to continuing our research of IMB-115 in insomnia associated with alcohol cessation and across the spectrum of insomnia disorders.”

Findings from phase 1 studies of IMB-115 for the treatment of insomnia disorder showed improvements over placebo in multiple sleep efficacy parameters, including reduction of sleep fragmentation throughout the night. Results from a phase 1b dose-ranging study evaluating IMB-115 in patients with insomnia disorder were announced last year.

In accordance with the US Food and Drug Administration’s (FDA) industry guidance on the Assessment of Abuse Potential of Drugs, Imbrium conducted a study specifically designed to assess the molecule’s potential for abuse, which showed that drug liking responses at anticipated therapeutic doses were comparable to placebo.

This randomized, single-dose, double-blind, crossover study was conducted to evaluate the pharmacokinetics, safety, and abuse potential, of IMB-115 (1 mg, 6 mg, and 10 mg) as compared to triazolam (0.5 mg and 1 mg) and placebo in healthy, non-dependent, recreational sedative users (n=50). In the study, assay sensitivity was met, establishing study validity. Results indicated that drug liking of the compound at the therapeutic dose of 1 mg was not statistically different from placebo. Supratherapeutic doses of IMB-115 (6 mg and 10 mg) showed drug liking results and adverse events that were similar to the positive control (triazolam 0.5 mg and 1 mg), however no amnestic effects were noted with IMB-115.

A separate randomized, single-dose, double-blind, crossover study was conducted to evaluate the safety, tolerability, pharmacodynamics, and pharmacokinetics of IMB-115 (2 mg and 6 mg) administered alone and in combination with alcohol in healthy subjects (n=48). The study revealed no significant changes in pharmacokinetic parameters resulting from co-administration of alcohol with IMB-115 (2 mg or 6 mg doses). Further, co-administration did not result in any significant changes in clinical laboratory values, vital signs, or oxygen saturation levels. In this study, the most prevalent adverse event was somnolence, which was elevated by co-administration with alcohol in most cases.

“Insomnia is a major challenge for some patients recovering from alcohol use disorder in their struggle to maintain sustained abstinence from alcohol, and untreated insomnia in these individuals has been shown to interfere with their recovery,” says Richard Fanelli, PhD, vice president and head of research and development at Imbrium Therapeutics. “We are encouraged by the findings from IMB-115’s early studies toward insomnia related to alcohol cessation, and we look forward to furthering our understanding of its potential therapeutic applications through additional research.”

“About half of individuals experiencing alcohol withdrawal report having insomnia, and there is considerable evidence suggesting that sleep disturbances, such as insomnia, increase the risk of relapse,” says Craig Landau, MD, president and CEO of Purdue Pharma. “Our compassion for patients and commitment to innovation guides our pursuit of new medicines. Through this research, we will further explore the role for our investigational proprietary compound to address insomnia associated with alcohol cessation and potentially reduce this barrier to sustained recovery.”

Imbrium is further evaluating the possible utility of IMB-115 in the treatment of additional psychiatric and neurological disorders.

This news brief discusses an investigational new drug under development and is not intended to convey conclusions about efficacy or safety. There is no guarantee that such investigational drug will successfully complete clinical development or receive regulatory approval. 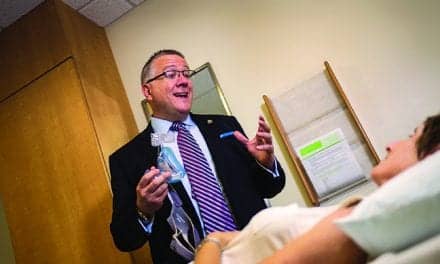