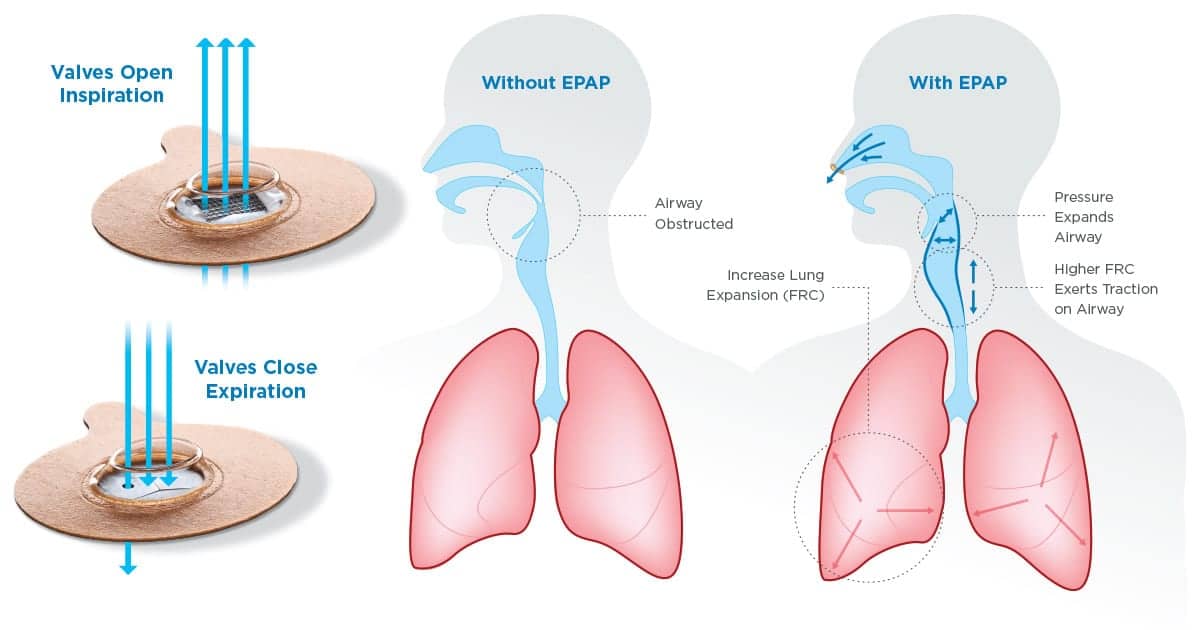 Expiratory positive airway pressure for sleep apnea goes from humble beginnings to devices with expanded features such as reusability.

When physician and engineer Rajiv Doshi’s wife complained about his snoring and asked if he could do something about it, he thought about it for a moment.

“Well, maybe that is a reasonable request; maybe I can do something about it,” Doshi recalls thinking. Maybe he could invent a solution.

An adjunct professor of medicine at Stanford University, Doshi, MD, thought back to his days in medical school in the ’90s, when he had watched a patient with emphysema do an exercise called pursed lip breathing.

The exercise of breathing in through the nose and slowly breathing out through pursed lips helped that patient create backpressure to keep the airways open.

When that memory floated back to him, he knew he could invent a device to create that same backpressure to keep his airways open during the night, and hopefully prevent his snoring. It worked.

After months of developing and testing a homemade anti-snoring device made from an assortment of supplies, including tubing he picked up at hobby stores and pieces of latex gloves, the first expository positive airway pressure (EPAP) device was born.

A venture capitalist at the time with the firm De Novo Ventures, which invests in biotechnology, Doshi had the resources to launch this new product. He also knew that there was a market for treatment solutions for sleep apnea. Many physicians were looking at surgical solutions in the mid-2000s and he wanted to present a less invasive option. So he created the company Ventus Medical in December of 2005 to further develop and sell his EPAP device under the name Provent for the treatment of sleep apnea. The company later released a lower-pressure version called Theravent for snoring. Since then, millions of these devices have been sold, and EPAP has become a well-known therapy among sleep physicians.

The earliest EPAP therapy prototypes that Rajiv Doshi, MD, made for nasal EPAP in 2005. Doshi used these devices to test the concept of nasal EPAP to treat snoring on himself. Courtesy of Rajiv Doshi.

Unlike CPAP, this therapy doesn’t require a power source and is small enough to fit in the palm of your hand. It consists of a patch that holds two small plugs over each nostril with an adhesive seal. Each plug has a pinhole-sized valve that creates enough backpressure to keep the airways open at night. While CPAP is still considered the gold standard of sleep apnea therapy, Provent has been shown to have a high compliance rate and to reduce daytime sleepiness, according to research published in the journal SLEEP.1

It’s an extraordinarily simple solution, so simple that when it first appeared on the sleep treatment scene, it was met with disbelief, Doshi says. He and his colleagues took on the arduous task of convincing the medical community of the viability and effectiveness of EPAP.

Since then, several studies have proven that EPAP is an effective, safe treatment option for patients who might not tolerate CPAP. One research paper showed that patients who used Provent for 3 months had their median apnea-hypopnea index (AHI) decrease from 48.2 to 18.9.1

EPAP has also become a mainstay for snoring. Still sold under the brand name Theravent, these snore strips are available over the counter and have made their way into stores like Walgreens and CVS, says Steve Howard, a spokesperson for the company that produces Theravent, Pittsburgh-based Foundation Consumer Healthcare.

Since its inception, EPAP technology has mostly stayed consistent, until now. A few medical companies and independent entrepreneurs are redesigning this therapy to focus on increasing patient comfort and creating reusable EPAP devices.

One company launched a snore-reducing sleep mask early this year called the Hüpnos. It looks just like any sleep mask, except it has hidden EPAP technology built inside, for those who might feel self-conscious about wearing an anti-snoring device to bed.

“It’s something that looks just like a regular eye mask, so it’s good for those 25-year-olds who are sleeping over at their girlfriend’s,” says CEO and Hüpnos founder Curtis Ray.

Hüpnos uses sensors to monitor sleep through the night. The mask works with a smartphone application that connects to Bluetooth that’s built into the device to detect snoring. The company says that one perk of this device is that the EPAP only activates when someone is already asleep.

“We made it so that you fall asleep and there is no EPAP. Once you’re asleep and you are snoring then it applies just enough EPAP pressure,” says Ray.

If someone is sleeping on their back, which might cause more snoring, the mask will gently vibrate, causing them to change positions.

There is not yet any peer-reviewed research to support Hüpnos since the company is not yet seeking FDA approval. So far, Ray says, a few hundred masks have been sold and feedback is positive.

Another company, Australia-based Oventus Medical, is looking to bring EPAP to dentists who might already be treating sleep apnea patients with oral appliances. The Oventus EPAP valve, called the ExVent, fits into the company’s O2Vent oral appliance. ExVent is undergoing review at the FDA.

The ExVent could be a solution for patients who breathe through their mouths while sleeping, making more traditional EPAP therapy not as effective.

Individuals who have nasal issues, including congestion or anatomical abnormalities, which contribute to mouth breathing, may be a good fit for oral appliance EPAP, says Robyn Woidtke, MSN, RN, RPSGT, director of regulatory and clinical affairs at Oventus.

An illustration shows the blue ExVent EPAP valve as it fits into Oventus Medical’s O2Vent oral appliance. ExVent is undergoing review at the FDA and is not yet for sale in the United States. Courtesy of Oventus Medical.

Later this year, AirAvant Medical Inc is coming out with its new EPAP, the Bongo Rx. Its silicone plugs are inserted inside the nostrils. This device uses the same method to produce backpressure that the original Provent uses, except it dilates the nostrils to further increase airflow, according to Ron Richard, co-founder of AirAvant Medical.

“The other devices were more like a Band-Aid that you have to place on the outside of the nose, so it didn’t have any nasal dilation at all,” says Richard. “[Bongo Rx] does create more airflow for the patients.”

The Bongo Rx is a silicone EPAP device. When inserted into the nostrils, the valves will open upon inhalation. Exhaled air flows through small vent holes producing resistance that generates expiratory positive airway pressure. Courtesy of AirAvant Medical Inc.

Last year, the FDA gave the Bongo Rx clearance to treat mild to moderate obstructive sleep apnea after studies showed its efficacy. “Through the studies we found that it really lowers the work of breathing and makes the patients feel much more comfortable,” says Richard.

“We achieved the same results as what we saw on the download of their CPAP machine. That was encouraging and we are continuing to do additional studies.”

AirAvant Medical’s device is also reusable. The device can be cleaned and worn for up to three months. Made with silicon, it can be washed with mild soap.

Patients who are congested with a cold or allergies might find this option to be more comfortable than other forms of EPAP, Richard says, since the Bongo Rx is easy to slip in and out of the nose throughout the night.

In the future, AirAvant plans to incorporate a built-in monitoring system that will enable patients and doctors to track treatment outcomes, but the technology isn’t quite there yet, says Richard.

“The thing that we need to work on and we are working on is giving the patient and their doctors more objective data,” he says. “We are looking at sensors that we can integrate into the product, but we have not yet found anything small enough or that has enough battery power.”

Doshi’s hope is that the developers of these newer breeds of EPAP try to understand the needs of the patients. “I invented this EPAP technology because there was a massive patient need and that need still exists, so I am really hopeful that people can learn from Provent, improve upon it, and ultimately impact patients’ lives. That would be a great source of joy for me.”

This article was updated on Feb. 14 with information about Hüpnos and Theravent.

Featured Image caption: As shown in this illustration of Provent’s mechanism of action, EPAP devices work by creating backpressure that keeps the airways open. 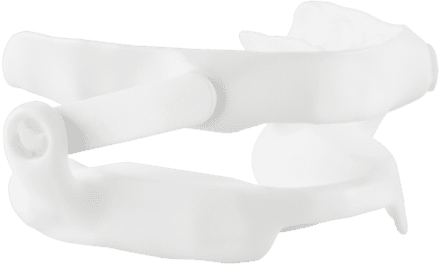 3 CPAP Challenges That May Be Remedied With Accessories