Chronic obstructive pulmonary disease (COPD) is any respiratory disease that persistently impedes airflow and therefore gas exchange in the lungs. Obstructive sleep apnea (OSA) is the intermittent cessation of airflow through the upper airway during sleep. An estimated 11% to 29% of people who have OSA also have COPD.1 The coexistence of OSA and COPD is called “overlap syndrome.” Both disorders share some of the same pathophysiological processes such as systemic inflammation. However, treating one component of overlap syndrome does not necessarily improve the other.

COPD comprises several respiratory diseases including emphysema, chronic bronchitis, asthma, or any combination of these. The disease begins with inflammation of the airway tissues. Sources of inflammation are nicotine, chronic respiratory infections, air pollution, and allergies. Eliminating exposure to these factors may reverse early inflammatory changes in some people with COPD. The early stage of COPD usually produces no symptoms. As COPD progresses, a person initially develops a productive cough and has difficulty breathing after strenuous exercise. Later, the person has difficulty breathing after minimal exertion, has frequent respiratory infections, and has chronic hypoxemia. In the advanced stage of COPD, the person may develop thoracic deformities, right-sided heart failure, and severe respiratory failure.

OSA is not considered a COPD, although it involves intermittent interruption of ventilation. COPD affects the lower airway, whereas OSA affects the upper airway. In a person with OSA, the muscles in the upper airway relax excessively during sleep. In 1985, David Flenley2 first used the term “overlap syndrome” to describe pathological features he noted in people who had coexistent chronic bronchitis (ie, COPD) and OSA. Flenley reported that people with overlap syndrome have more severe hypoxemia and hypercapnia during sleep—particularly during rapid eye movement (REM) sleep—than during wake; have a greater level of desaturation during sleep than would occur in a person with OSA alone or COPD alone; and have a greater degree of constriction of the pulmonary vessels than would occur in a person with COPD alone or OSA alone. Later studies confirmed Flenley’s findings.1

Hypoxemia that can occur with OSA alone or COPD alone induces constriction of the pulmonary arteries, leading to excessive pressure within these pulmonary vessels. The heart works harder to pump blood through the constricted pulmonary arteries (which carry blood from the right ventricle to the lungs). The increased work causes the right ventricular muscle tissue to thicken. This ultimately weakens the ability of the right ventricle to contract and expel blood efficiently to the lungs (ie, right-sided heart failure). People with overlap syndrome can develop pulmonary hypertension, even if their OSA is not severe.3 Some research indicates that right-sided heart failure is more prevalent among people with overlap syndrome than among people with sleep apnea alone.3

Current treatments for people with overlap syndrome focus on improving oxygenation (for the COPD component) and on preventing sleep-related disordered breathing (for the OSA component). A person with COPD alone typically would be treated by bronchodilator drugs to open the airway passages and increase airflow; corticosteroid drugs to reduce inflammation-induced swelling of airway tissues, thereby opening the airway and increasing airflow; supplemental oxygen to counteract hypoxemia; and eliminating or reducing exposure to sources of inflammation such as nicotine or allergens. A person with OSA alone typically would be treated with continuous positive airway pressure (CPAP) therapy, weight loss, or surgery. However, a treatment approach that improves one component of overlap syndrome may negatively affect or have no impact on the other component.

Bronchodilator drug treatment
Various studies4,5 indicate that bronchodilators may improve subjective sleep quality; improve nocturnal oxygen saturation; and increase total REM sleep time in people with COPD. However, the extent that these drugs also can improve OSA in people with overlap syndrome has not been determined.1

Corticosteroid drug treatment
Corticosteroid drugs improve symptoms of COPD by reducing inflammation6; this opens the airway passages, thereby improving breathing and allowing a person to remain asleep longer (as reflected by increased total sleep time). However, an adverse effect of corticosteroid drugs is weight gain, which may negatively impact the goals of OSA treatment in people with overlap syndrome.

Weight loss
Weight loss can improve symptoms of OSA (eg, by reducing the number of apnea episodes). However, in the advanced stage of COPD, weight loss is associated with increased mortality. Therefore, a weight loss program may be contraindicated for some people with overlap syndrome. However, there are no current data that have determined the extent that a diet and exercise program may be beneficial for people with overlap syndrome whose COPD is not severe.

The definition of overlap syndrome as simply the coexistence of OSA and COPD is imperfect since each component of overlap syndrome can exist at different levels on a spectrum of severity. Because of this, it is unclear at what level of severity that the coexistence of OSA and COPD has an additive effect, thereby resulting in more severe pulmonary hypertension, right-sided heart failure, and mortality than would occur in a person with OSA alone or COPD alone.

Pulmonary physicians often do not ask patients with COPD about symptoms of OSA such as loud snoring, witnessed apneas, and awakening with gasping. Undiagnosed OSA in a person with COPD could put the patient at risk of developing more serious pulmonary hypertension, right-sided heart failure, or severe hypoxemia during sleep than would occur if the person had COPD alone or OSA alone. However, effectively treating both components of overlap syndrome can be problematic since treating one component of overlap syndrome may negatively affect the other component. Future studies may soon determine how to effectively treat people with overlap syndrome, how to reduce mortality in people with overlap syndrome, and provide more clarity concerning the interaction between OSA and COPD.

Regina Patrick, RPSGT, is a contributing writer for Sleep Review. Questions for the author can be sent to [email protected]

BRPT Launches “Life as an RPSGT” 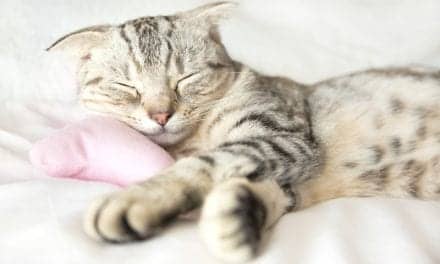 Lots of Sleep Is the Real Cat’s Meow